National Geographic has announced details on a full day of programming on Thursday May 21st to celebrate the end of the World War II, which include two primetime original premieres, beginning at 8/7c. The specials combine thousands of hours of research, interviews and original footage that give viewers an intimate account of the epic war told through historians as well as those who experienced the war firsthand.

On May 8, 1945, the Allied forces formally accepted the surrender of Nazi Germany, officially bringing an end to World War II in Europe. This historic event, which became known as Victory in Europe Day, or V-E Day, offered a long-awaited moment of hope and celebration for millions of people around the world whose lives had been gripped by turmoil, overwhelming devastation and heartbreaking loss throughout the breadth of the war.

In observance of the 75th anniversary of the pivotal day, National Geographic gives voice to those who were on the front lines of the global war that took the lives of an estimated 66-85 million people.

Beginning at 8/7c, WWII IN EUROPE: VOICES FROM THE FRONT, narrated by ABC News’ Bob Woodruff, offers viewers a chance to hear from some of the last remaining voices of a war that forever changed the world. Giving attention to a full range of those who experienced the war in Europe, including the Allied Powers and the Axis Power of Germany, the one-hour special uniquely presents vivid memories from more than three quarters of a century ago.

Told using rarely seen archival footage and photographs and dozens of interviews, WWII IN EUROPE: VOICES FROM THE FRONT captures the moment of jubilation and remembrance when people around the world learned that the European chapter of the second world war had drawn to an end. From New York’s famed Times Square to London’s Piccadilly Circus to Moscow’s Red Square, the special captures how that moment represented different meanings to all who were involved.

At 9/8c, the two-hour special HEROES OF THE SKY: THE MIGHTY EIGHTH AIR FORCE introduces viewers to the courageous men of the legendary Eighth Air Force of the United States. Following the attack on Pearl Harbor, the United States officially entered the war as Nazi Germany stood at the pinnacle of its power, occupying most of Europe. To take the fight to the enemy, suddenly, the Eighth Air Force was called into action and entered the brutal air war over Europe. 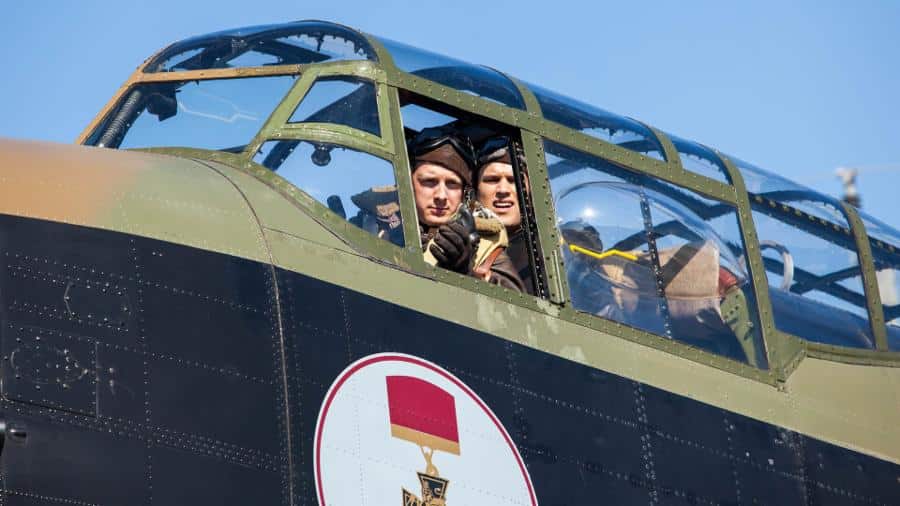 HEROES OF THE SKY: THE MIGHTY EIGHTH AIR FORCE features recollections of the brave men from the U.S. Eighth Air Force who entered the cockpit mission after mission, knowing that their call to duty was a likely death sentence. Integrating the airmen’s own words from personal diary entries, letters to loved ones and previous interviews, the special seamlessly draws from more than 1,000 hours of rare and never-before-seen intimate footage to tell the incredible story of the heroic figures in “The Mighty Eighth.”

“We look at history in order to understand our past and inform our future,” says Geoff Daniels, executive vice president of global unscripted entertainment at National Geographic. “At National Geographic, we combine our trademark access and our commitment to historical accuracy to deliver authentic, meaningful content to our viewers. As we approach the 75th anniversary of V-E Day, it’s more important than ever to revisit and remember this crucial time in world history and to ensure that these stories live on for generations to come.”

National Geographic’s full day of World War II remembrance programming features the very best historical programming, including premieres of the Europe from Above series and re-airings of top specials, such as Nazi Underworld, Inside the SS: Rise to Power and Hitler’s Last Year. The day’s full programming line-up is below.

The June issue of National Geographic magazine features a cover story commemorating the 75th anniversary of the end of WWII. The cover feature shares the stories of some of the last surviving veterans of the conflict from seven countries through a series of interviews and photographs. Subjects include still-living members of the military and those affected by the war from both the Allied and Axis powers of the time, including the United States, the Soviet Union, Germany, Japan, the United Kingdom and others. The June issue cover story, “The Last Voices of World War II,” will be available online at natgeo.com/WWII on May 6.

WWII IN EUROPE: VOICES FROM THE FRONT is produced by National Geographic. Christine Weber serves as executive producer. The special is produced, written and directed by Chad Cohen. Bethany Jones is associate producer. 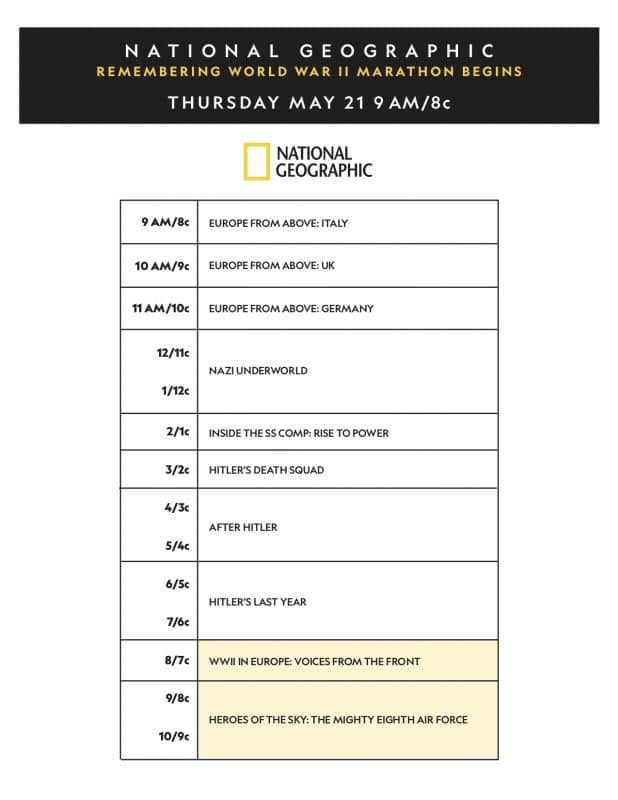 No Disney+ release date for this content, though these should be available on Hulu after they have aired on the National Geographic channel.

Roger has been a Disney fan since he was a kid and this interest has grown over the years. He has visited Disney Parks around the globe and has a vast collection of Disney movies and collectibles. He is the owner of What's On Disney Plus & DisKingdom. Email: Roger@WhatsOnDisneyPlus.com Twitter: Twitter.com/RogPalmerUK Facebook: Facebook.com/rogpalmeruk
View all posts
Tags: national geographic, world war 2