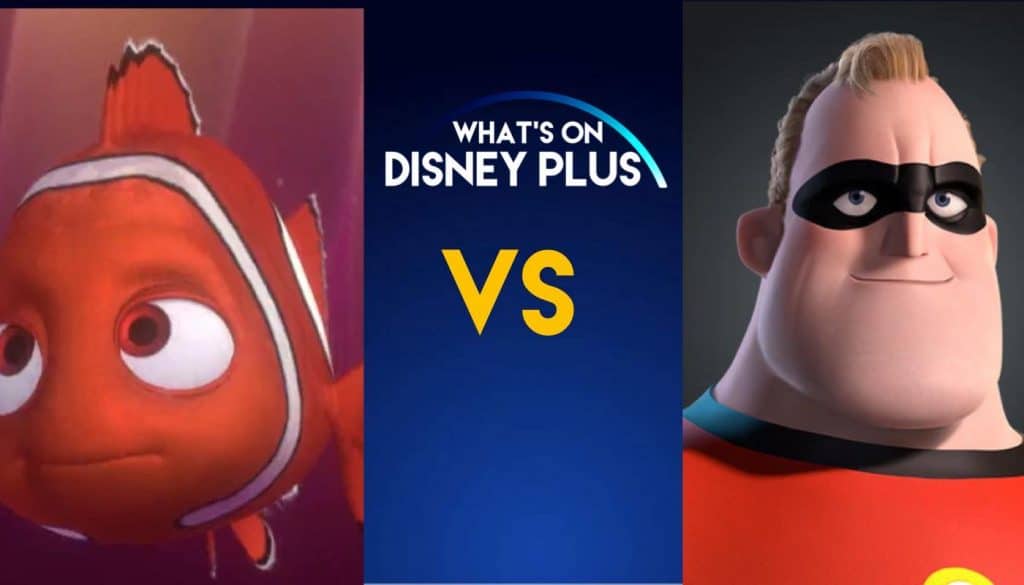 We’re back with another round of our Disney+ Battle series. This week, it’s a battle between two icons of Pixar; “Finding Nemo” and “The Incredibles.” So, let’s dive in and see whether fish or superheroes will win this battle.

While the film is called “Finding Nemo,” the real protagonist of Marlin, Nemo’s father. His search for Nemo drives this film. He’s a flawed, but loving father who just wants to rescue his son who has been captured by a dentist and put in a fish tank. In “The Incredibles,” the protagonist is Bob Parr, also known as Mr. Incredible. He’s a superhero who can’t stand living in a world that doesn’t want superheroes. He’s also a flawed, but loving father; but he’s driven by his desire to be loved as a superhero again. Marlin’s motivations make him a better protagonist. Point to “Finding Nemo.” The main antagonists in “Finding Nemo” are time and distance. Marlin has to find Nemo before the dentist gives Nemo to his niece as a pet. There’s no true villain, it’s more of an abstract concept. In “The Incredibles,” the antagonist is clear. It’s Syndrome. The person who isn’t superpowered, but looks up to the supers. When Mr. Incredible turns him away, he turns evil and wants revenge against the supers for what he perceives as looking down on him. While his motivation is completely understandable, it’s his actions that make him evil. Syndrome is the greater antagonist. Point to “The Incredibles.” “Finding Nemo” features one of the most well-known and loved supporting characters in Dory. On top of that, we get Crush, the sharks; specifically Bruce; and the fish in the tank. Meanwhile, “The Incredibles” features the rest of the Incredibles; along with Frozone and Edna Mode. This one is tough. There are great supporting characters in both films. I think the popularity of Dory is what gives “Finding Nemo” the point. This is the hardest category to quantify in this matchup. There are no memorable songs in either of these movies. There’s no “You’ve Got a Friend in Me” like in “Toy Story” or “Remember Me” like in “Coco.” There’s not even a memorable cover like “Life Is A Highway” in “Cars.” Thomas Newman, cousin of “You’ve Got a Friend in Me” writer Randy Newman, composed the music for “Finding Nemo;” while Michael Giacchino composed the music for “The Incredibles.” Both complement their movies very well. But they don’t stand out. The “Finding Nemo” score was nominated for Best Song at the Oscar. None of the music from “The Incredibles” was nominated for an Oscar, even though the music from both movies were nominated for other awards. I think I have to give this category to “Finding Nemo.” Once again, we have reached the most subjective of the categories. For me, the memorable moments of “Finding Nemo” are Nemo being taken, Dory accompanying Marlin on his quest, the jellyfish, Crush and the current helping Marlin and Dory get to Australia, Dory speaking whale, Marlin thinking Nemo is dead, and Nemo and Marlin being reunited. As for “The Incredibles,” I remember Mr. Incredible trying to save people and hurting them, Edna Mode’s “NO CAPES” rule, Frozone’s conversation with his wife about the greatest good he is ever gonna get, Jack Jack developing powers and the Incredibles working together to stop Syndrome. By my count, “Finding Nemo” has slightly more memorable moments. Point to “Finding Nemo.” “Finding Nemo” wins this week’s battle. I’m surprised it was as lopsided as it was. Personally, I’m a bigger fan of “The Incredibles,” but there’s no doubt these are two iconic Pixar movies. And, they have earned their place in the Disney and Pixar canon. But, now I’m going to throw it over to you. Which do you like better: “Finding Nemo” or “The Incredibles?”

Jeremy has been a big Disney fan since he was a kid growing up during the Disney Renaissance. One day he hopes to go to every Disney Park in the world.
View all posts
Tags: Battle, disney, Finding Nemo, Incredibles, pixar