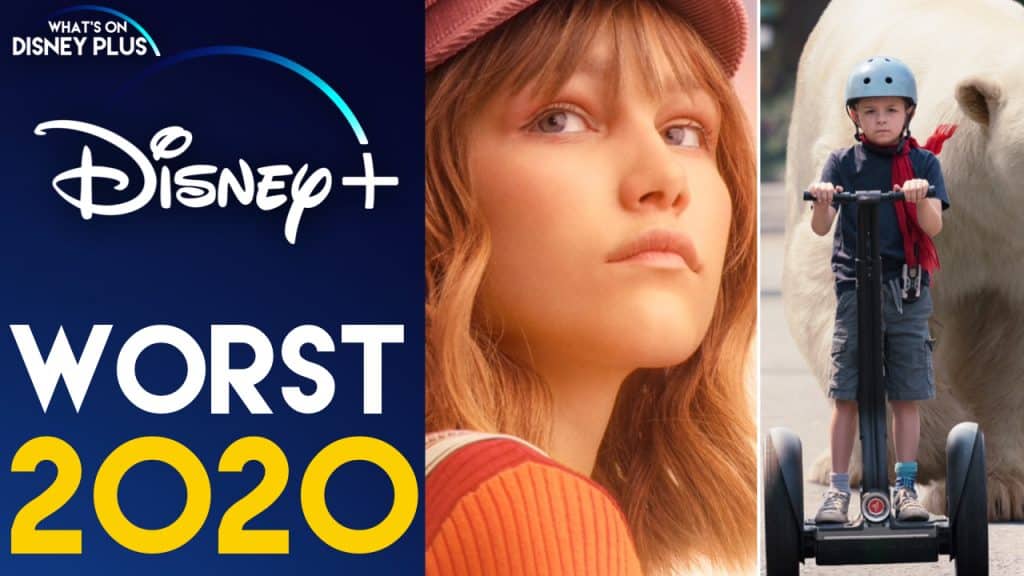 2020 will probably go down for many as one of the worst years in history, and as we approach the end of the year, I’ve been taking a look back at many of the best Disney+ Originals of the year including both movies and series.

Unfortunately, not every Disney+ Original that has been released in 2020 has been great, so to be fair, I’ve also drawn up a list of my least favourite shows and movies from 2020.

Here are my worst Disney+ Originals of 2020:

The “Disney Insider” show much like the rest of us, kicked off 2020 with so much promise, with the docuseries set take Disney+ subscribers behind the curtain of The Walt Disney Company.   Each week was going to give us a look behind different Disney divisions, including movies, theme parks, destinations, music, toys, and more. Each episode would offer three unique stories that capture the magical moments and heartfelt storytelling that is Disney.  Unfortunately, Covid completely ruined those plans, we had a few episodes go as planned, and while the show bordered on just being a commercial for Disney, it looked like it was going to be a solid addition to Disney+.  Then episodes just started drying up, and we haven’t heard a thing about this series since May.  It’s a shame this series got completely derailed by Covid, because this series depended on the ever-flowing release of movies, shows and other events to keep it going.  I hope the “Disney Insider” show does return, but it’s also likely that the project has been pulled indefinitely, not that Disney has said one thing about this show’s future.

Released back in March, “Stargirl” is an offbeat coming-of-age story based on the critically-acclaimed, New York Times’ best-selling young adult novel about an unassuming high schooler who finds himself inexplicably drawn to the free-spirited new girl, whose unconventional ways change how they see themselves…and their world.  Honestly, this is the worst film I’ve seen this year, I found it so boring, and while I was watching it, I just wanted it to end.  If I hadn’t been reviewing the film, I’d have turned it off.  It had every single “America High School” cliché in it and was just disappointed in how it turned out.    Check out my full review of Stargirl

Another early film from earlier in the year and it’s also based on popular book series.  The movie tells the story of Timmy Failure, who, along with his 1,500-pound polar bear partner Total, operates Total Failure Inc., a Portland detective agency. An elementary school oddball, the clueless but confident Timmy, must navigate the world of adults around him, all in his quest to become the best detective in the world.   There are some fun moments in the film, and I’m sure plenty of kids will like it.  My biggest issue with the film is that Timmy isn’t a likeable character, he has no respect for any adults in his life, and you end up feeling sorry for his teachers and mother.  “Timmy Failure” isn’t your usual Disney kids movie, it’s not super fluffy or sugary sweet, it’s odd and different.    Check out my full “Timmy Failure: Mistakes Were Made” review.

I really enjoy many cooking game shows such as “The Great British Bake Off”, “Hells Kitchen” and “Master Chef”, so I was looking forward to “Be Our Chef”, but it is my most disappointing Disney+ series of 2020.  With a cooking game show set in Walt Disney World, I thought that sounded like something I would enjoy.  But I couldn’t carry on watching it after a couple of episodes.  I found the presenter, “The Office” star Angela Kinsey, to be completely miscast in her role, as I felt she just couldn’t carry the show with her personality, and her interactions with the families seemed so forced.   The show’s concept needs a few tweaks to make it more palatable for a mainstream audience because I found “Be Our Chef” way too childish.      Another Disney+ Original series, “Shop Class” had a very similar problem.

There are many other Disney+ Originals from this year I also didn’t enjoy such as “One Day At Disney”, “The Big Fib” and “Becoming”, but those shows didn’t seem bad enough, in my opinion, to make the “worst” list, since I didn’t enjoy them but there wasn’t anything really wrong with them.  Unfortunately, in 2020, there seemed to be way too many Disney+ Originals that felt very average.

As with all movies and shows, my opinions may vary from yours.  While I didn’t enjoy these movies and shows, that doesn’t mean you won’t.  So if you’ve got a Disney+ subscription and haven’t seen something on this list, don’t let that put you off, try it out and make your own mind up.

What are your worst Disney+ Originals of 2020?  Let me know in the comments below:

Roger has been a Disney fan since he was a kid and this interest has grown over the years. He has visited Disney Parks around the globe and has a vast collection of Disney movies and collectibles. He is the owner of What's On Disney Plus & DisKingdom. Email: Roger@WhatsOnDisneyPlus.com Twitter: Twitter.com/RogPalmerUK Facebook: Facebook.com/rogpalmeruk
View all posts
Tags: worst of 2020