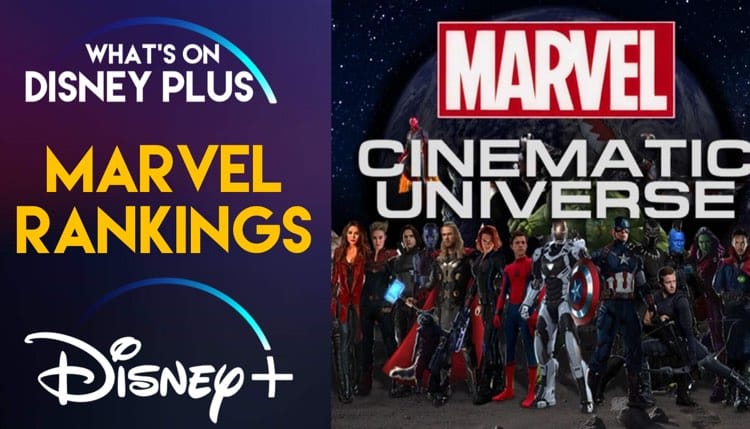 Disney+ released seven Marvel items onto the streaming service (in the United States) in 2021. There were 5 television series and 2 movies. While 2020 was known for its lack of content across the board due to so many productions being shut down because of the pandemic, 2021 saw a plethora of content from Marvel. I’m going to rank the seven Marvel entities that were added to Disney+ this year.

For years, fans have clamored for a “Black Widow” solo movie. Of the original Avengers, only she and Hawkeye failed to get their own solo movie. Even the majority of new additions to the team got solo movies before Black Widow did. Then, the pandemic hit and delayed this film, multiple times. Then, this film was added to Premier Access causing a lawsuit between Scarlett Johansson and Disney. There was so much not related to the movie that the movie, itself, fell to the wayside. It was honestly a subpar effort from Marvel. It told a bit of an origin story, but mostly served to set up Scarlett Johansson’s replacement given her death in “Endgame.” The movie has its bright spots, but it always felt like it just wasn’t good enough. The character deserved a better solo movie than this film. Marvel’s only foray into animation on Disney+ here in the United States was a solid entry. I had a lot of fun watching it each week. For the first seven weeks, it seemed like there was no connection between each episode. Then, in the last two episodes we got to see all of these seeming one-off tied together into an overarching story. It was good, but it doesn’t hold a candle to the other series added to the service this year. For some people, this was the best series that Marvel produced this year. For me, it was very good, but was my least favorite of the live action series. Admittedly, my expectations could’ve been too high for this one to ever live up to, but I walked away entertained but not impressed. I wonder if the delays in production may have led to some of my issues with the series. I may feel differently after getting to see season 2. Let’s be clear, I’m excited for season 2 and I still thought this was really good. It just let me down a little bit.

4. FALCON AND THE WINTER SOLDIER

When Disney and Marvel announced the first three series, this is the one I was most excited to see. These are two characters who clearly had a lot of skill, but were passed over in the movies. They are both often afterthoughts to Captain America in the comics, as well. I had high hopes for two underrated characters finally getting their due. But, this limited series felt very uneven. Anthony Mackie and Sebastian Stan played off each other very well. They tackled racial issues in a mostly believable way. But, the Flag Smasher storyline went nowhere. I’m still not sure what’s entirely up with Sharon Carter as the Power Broker. I hope that gets explained at some point. In the end, it was just a long way to make Falcon into the new Captain America, even though Sam Wilson was given the shield by Steve Rogers at the end of “Endgame,” signifying he should be the next Captain America. It did a good job of introducing US Agent and making us dislike him for not being Steve Rogers. It’s another series that I believe was done a disservice by the pandemic. I think it could’ve been better. In contrast to “Falcon and the Winter Soldier,” when the original three Marvel series were announced, this was the one I was least excited to see. Wanda Maximoff and Vision had been two of the most misused Avengers the entire series, and I didn’t expect Marvel to finally give them their proper due. I understood the sitcom concept and was excited for that, but I figured the characters would be misused again. At first, it appeared that was exactly what was happening. Then, episode 4 happened. In that one episode, I went from being not sure if I would continue with this series to having to see it each week. It exceeded my expectations. Wanda and Vision finally got their due. We all know how Agatha Harkness stole the show. Plus, we got a better look at SWORD and an Easter Egg for the Captain Marvel storyline. By the end of the original three series, this one was my favorite, and it was the one I could originally do without. Much like “WandaVision,” I wasn’t expecting much from “Hawkeye” when it was announced. By the end of the first episode, I was hooked. It was my favorite first episode of any Marvel series on Disney+. I loved the street level aspect of the series compared to the Avengers level events of so many of the movies and even some of the series. It was believable that Hawkeye would need to help Kate Bishop. It brought back Kingpin, who we’ve needed since Netflix canceled “Daredevil.” It set up the Young Avengers and Echo. And, it completely subverted expectations with “The Swordsman.” It may be recency bias, but it’s my favorite of the series, so far. 1. SHANG-CHI AND THE LEGEND OF THE TEN RINGS

It may be unfair comparing movies to television series, but this was my favorite entity from Marvel added to Disney+ in 2021. It feels completely different from every other Marvel movie before it while still feeling like it fits right into the Marvel Cinematic Universe. It brings in Wong and the Abomination. It gives us a new hero to follow. It was my second favorite Marvel movie of 2021, but my favorite that could be added to the service any time soon.

Jeremy has been a big Disney fan since he was a kid growing up during the Disney Renaissance. One day he hopes to go to every Disney Park in the world.
View all posts
Tags: black widow, disney, disney+ originals, disney+ premier access, falcon and the winter soldier, hawkeye, loki, Marvel, Marvel Cinematic Universe, Rankings, Shang-Chi and the Legend of the Ten Rings, wandavision, what if