It’s been a quiet month so far for new releases on the DisneyLife streaming platform in the UK and Ireland, but this past week, 5 new episodes from Season 3 of Violetta.

Violetta tells the story of a talented teenager who returns to her hometown of Buenos Aires with her father after a few years living in Europe. There she finds loyal friends, discovers true love and a passion for music as she navigates the trials and tribulations of growing up. 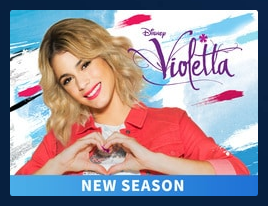 The series ran for three seasons and ended in 2015, with 240 episodes, though currently only 175 episodes are available on DisneyLife, so there are still many more episodes from season three to add.

Roger has been a Disney fan since he was a kid and this interest has grown over the years. He has visited Disney Parks around the globe and has a vast collection of Disney movies and collectibles. He is the owner of What's On Disney Plus & DisKingdom. Email: Roger@WhatsOnDisneyPlus.com Twitter: Twitter.com/RogPalmerUK Facebook: Facebook.com/rogpalmeruk
View all posts
Tags: disneylife, violetta