Mickey Mouse is serving as a squire to the brave knight, Sir Mortimer when he realizes Sir Mortimer isn’t as brave as his reputation suggests in the latest episode of “The Wonderful World of Mickey Mouse.” In “The Brave Little Squire,” Mickey Mouse is a peasant who worships Sir Mortimer. When Sir Mortimer is looking for a squire to carry his stuff, basically a sucker, Mickey quickly volunteers. Mickey thinks he’s being trained to be a knight, but Sir Mortimer is only looking for someone to send into dangerous situations first, before he can claim to have vanquished the threat. But, Mickey figures out what’s going on, and when Sir Mortimer flees the castle because a dragon is approaching, Mickey rushes in to fight the dragon and save Queen Minnie earning his place as a knight.

This is a very fun short that’s a great addition to the collection of shorts that make up “The Wonderful World of Mickey Mouse.” From what I remember, Mickey and Minnie were the only core members of Disney’s creations to appear in this short and I think it’s better for it. Sometimes only focusing on Mickey and one other character helps tell the story without forcing someone in for no reason. Minnie makes sense here because Mickey is trying to be knighted to earn affection from the Queen. I hope we get some where Mickey is only interacting with Donald, Pluto and even Goofy; despite my dislike of how he’s animated. 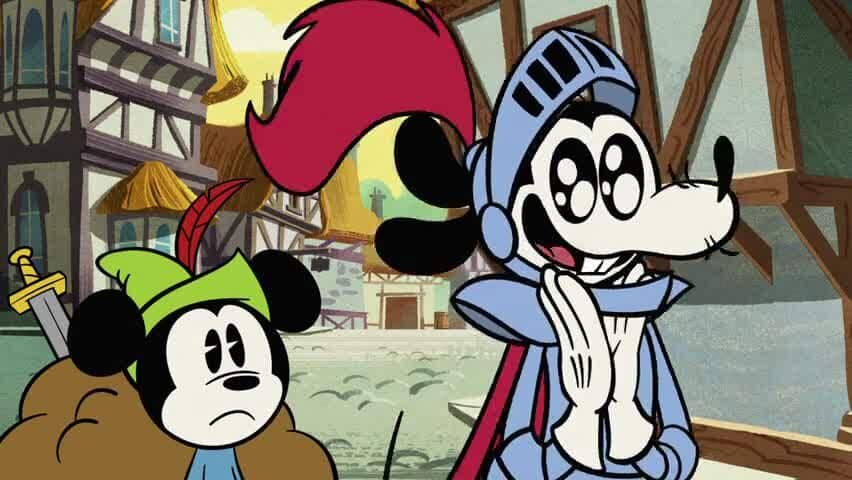 I love stories about knights and squire. It’s why I love the stories of King Arthur and the Knights of the Round Table. I love hearing about Merlin, the black knight and many others. It’s also why I love “The Sword in the Stone.” That aspect really appealed to me during this short. I want to see this version of Mickey return in a future short. I don’t want an entire series about Squire Mickey or Sir Mickey, but I’d love to see him reappear during another short or two.

I really look forward to these shorts dropping each Friday. I’m going to be sad when they finish the season. It’s been a great version of Mickey for kids and their parents to enjoy together. I hope this series of shorts gets a second season.

Jeremy has been a big Disney fan since he was a kid growing up during the Disney Renaissance. One day he hopes to go to every Disney Park in the world.
View all posts
Tags: “The Wonderful World of Mickey Mouse”, disney, review, The Brave Little Squire