Disney has begun offering extra security on some of its streaming services, including ESPN+, Hulu and DisneyLife, which includes subscribers being sent an email any time there is a new sign-in, detailing where the login happened and on what type of device.

I personally got one of these emails yesterday from my DisneyLife account, (which is due to become Disney+ on March 24th) and I’ve had a couple of subscribers contact me about getting these emails for both Hulu and ESPN+. 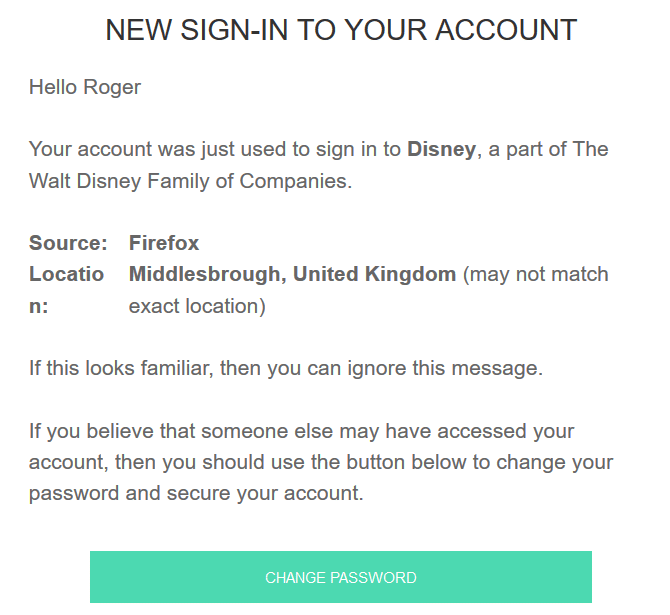 These emails haven’t yet started going out to Disney+ subscribers, but it looks like they will start being more proactive in dealing with accounts being stolen and used.

Ever since Disney+ launched, its been having technical issues for some users, which have found their accounts compromised by thieves, who have logged in on their accounts.

The major reason for this problem, is subscribers emails and passwords have been leaked onto the internet from previous hacks of other companies, then hackers are then selling these accounts on the dark web for pennies, since users continue to use the same password they’ve been using for years.  There have also been some users being scammed into sharing their username and passwords via phishing emails, which are done to trick users into providing these details.

This news should hopefully start making people aware of who is accessing their account and Disney can start to deal with them better, however this email notification is only promoting users to change their passwords if it wasn’t them.   One of the issues with Disney+, is that it launched with less security options than its competitors, which help stop the wide spread misuse of accounts, while Disney+ itself hasn’t been hacked, it has been slow to react to these issues.

Netflix is able to kick all users and devices off, requiring them to log back in with new passwords.  With  most services are now offering two-step verification with emails/text messages, to restrict people getting into stolen accounts.

It’s important that all internet users have different passwords for their online services, such as banking, email, etc.