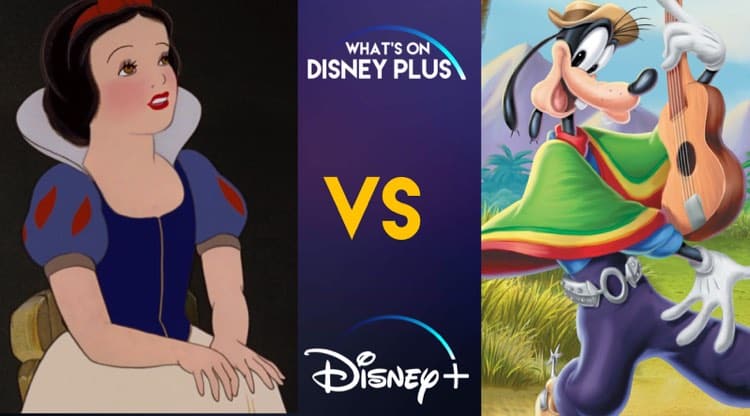 It’s time, once again, for another Disney+ Battle. In this battle it’s the film that started feature animation as we know it today against the film that changed Disney’s animation plan during World War II: “Snow White and the Seven Dwarfs” versus “Saludos Amigos.” “Snow White” is the most important animated film of all time, but is it better than the first package film from Disney’s Wartime Era? Remember this comparison is completely subjective.

The main character of “Snow White and the Seven Dwarfs” is Snow White. She is a princess who must flee after the Evil Queen decided to kill her because the Magic Mirror recognized her as the fairest of them all. Along the way, she meets the seven dwarfs and improves their lives as much as they improve hers. Eventually, she falls into a deep sleep but is awoken by the Prince. In contrast, “Saludos Amigos” doesn’t have one main protagonist. It is a series of shorts that each has its own main character. Those characters include Pedro the Airplane, Goofy and Donald Duck. While Goofy and Donald are iconic, and Pedro is adorable, Snow White is the better protagonist. Point to “Snow White.” The main villain of “Snow White and the Seven Dwarfs” is the Evil Queen. She is obsessed with becoming the “fairest of them all” and decides to have Snow White killed when the Magic Mirror recognizes Snow White is fairer than the Evil Queen. There’s no real villain in “Saludos Amigos.” There are challenges to the protagonists in each of the shorts but nothing villainous. By default, point to “Snow White.”

“Snow White and the Seven Dwarfs” has some of the best supporting characters in the seven dwarfs. Happy, Grump, Sleepy, Sneezy, Dopey, Bashful and Doc move the second part of the movie along. Meanwhile, “Saludos Amigos” introduces an excellent supporting character in Jose Carioca who would have a bigger role in “The Three Caballeros.” The dwarfs are more important to their film. Point to “Snow White.” “Snow White and the Seven Dwarfs” has two of the most recognizable songs in the entire Disney canon. “Someday My Prince Will Come” is a one of the standout songs in the pantheon of Disney music. While it’s far from my favorite, it’s well known and easy to recognize. And, then there’s “Heigh-Ho,” a song that people today still sing to and from work (often as a joke). After watching “Saludos Amigos,” none of the music stands out. I remember it meshing well with the story they were telling, but nothing that sticks with me beyond the film. Point to “Snow White.” This is the most subjective of all the categories, but in this battle, it may be the easiest to ascertain. “Snow White” is memorable and iconic. From the Evil Queen’s interactions with the Magic Mirror to “Heigh-Ho!” to the poison apple and the Queen falling off the mountain, “Snow White” is just plain memorable. In contrast, I remember Jose Carioca and that’s about it from “Saludos Amigos.” I know both Goofy and Donald, but I know them from other things and never think about “Saludos Amigos” when I think about them. This is a shutout for “Snow White.” This has been one of the most lopsided battles of all time, but it was exactly what I expected from these two films. But I want to hand it over to you. Which do you think is better: “Snow White and the Seven Dwarfs” or “Saludos Amigos?”

Jeremy has been a big Disney fan since he was a kid growing up during the Disney Renaissance. One day he hopes to go to every Disney Park in the world.
View all posts
Tags: Battle, disney, Golden Age of Animation, Saludos Amigos, Silver Age of Animation, Snow White and the Seven Dwarfs, Walt Disney Animation Studios