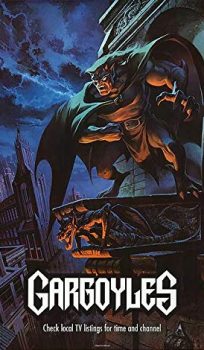 In the Dark Ages, there was a race of heroic warrior monsters known as Gargoyles. These creatures existed as stone in the day, but become flesh and blood at night. One Scottish clan made an alliance with humans to help protect a castle by night if the humans would protect their stone forms by day. The uneasy alliance was shattered when human prejudice provoked a betrayal that allowed the castle to be sacked and most of the resident clan destroyed, leaving only six adult survivors and a rookery of unhatched eggs. A further misunderstanding during the clan’s retaliation on the invaders and rescue of their hostages left the clan frozen in stone by a magic spell that would only be broken when the “castle rises above the clouds.” For a thousand years, the castle laid abandoned and the clan condemned by this curse. In 1994, a wealthy multibillionare named David Xanatos bought the castle and transported the whole structure to Manhattan where he placed it on top of the Eyrie building which he owned. It is high enough to be above the clouds, thus the conditions of the spell were met and the Gargoyles were revived. Now, this clan must adjust to this new age and gain friends, like Detective Elisa Masa who reveals that Xanatos revived them to exploit them for his unscrupulous ends. This is coupled by the fact that another Gargoyle comrade, Demona, is alive from their age, and is now an insane renegade bent on the extermination of humanity. Rebelling against them, the clan abandon the castle and pledge to protect New York like they protected the castle in the past.