ABC News Announces “Soul of a Nation” Special – “Together as One: Celebrating Asian American, Native Hawaiian and Pacific Islander Heritage.” 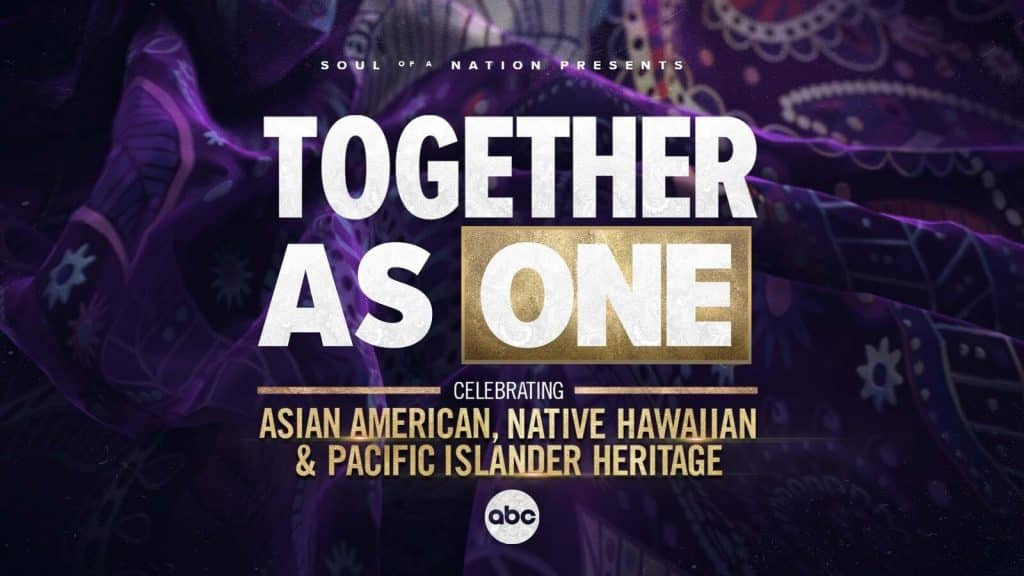 ABC News Announces “Soul of a Nation” Special – “Together as One: Celebrating Asian American, Native Hawaiian and Pacific Islander Heritage.”

The primetime presentation, hosted by actor, New York Times bestselling author and social justice activist George Takei, underscores the strength, beauty and resilience of the AANHPI community against a backdrop of ongoing hate attacks and a history of exclusion, marginalization and invisibility.

“Together As One: Celebrating Asian American, Native Hawaiian and Pacific Islander Heritage – A Soul of a Nation Presentation” airs Friday 27th May 2022 (8:00-9:01 p.m. EDT), on ABC and it will also be available the following day on Hulu.     No Disney+ release date has yet been announced, but some previous “Soul Of A Nation” specials have been released on the streaming service.

The one-hour program intentionally centers on AANHPI voices and stories to spread understanding and unity that is vitally needed at this moment and is packed with thoughtful discussion and inspiring stories, including the following:

RISING UP WITH HOPE AND ACTIVISM

Chang speaks with activists like 13-year-old Korean-American Mina Fedor, founder of AAPI Youth Rising, who is advocating for Asian American history to be taught in schools; Karen Kwan, a descendant of a Chinese American transcontinental railroad worker and member of the Utah House of Representatives, who is fighting to preserve history and legacy; as well as third-generation Chinese American Jan Lee, a New York City activist, who is fighting alongside others to protect the city’s historic Chinatown.

Pilgrim speaks with Hollywood directors Kwan (“Everything Everywhere All at Once”) and Chu (“Crazy Rich Asians”) and trailblazing actors Hong, Watanabe, Inaba, Diane Mizota and Sircar about shattering the harmful stereotypes perpetuated in Hollywood and popular media as well as the new generation of AANHPI talent changing the landscape with more inclusive and authentic storytelling.

Chang hosts a moving “Soul of a Nation: In the Kitchen” conversation with AANHPI women, discussing the alarming rise in violent anti-Asian attacks, how to fight back against hate, and ultimately how to embrace resilience and strength. The intimate and revealing conversation includes Noriko Nasu, a Japanese teacher and attack survivor now working to confront hate crimes; Min Jin Lee, the Korean American author of “Pachinko”; and Thenmozhi Soundararajan, a Dalit American activist.

Kaholokula shines a light on the under-told history and culture of Native Hawai’i, taking us inside the story of the overthrow of the Hawaiian kingdom with Paula Akana, executive director for the Friends of Iolani Palace. She will also explore how Native Hawaiians are reclaiming their power and rights today, speaking with cultural practitioner and Mauna Kea activist Noe Noe Wong-Wilson, Ph.D., and Kauanoe Kamanā, president of ʻAha Pūnana Leo, an international educational leader in indigenous language revitalization.

“Together As One: Celebrating Asian American, Native Hawaiian and Pacific Islander Heritage – A Soul of a Nation Presentation” is produced by ABC News. Melia Patria and Poh Si Teng are executive producers. Marie Nelson is senior vice president of Integrated Content Strategy and “Soul of a Nation” series creator. Tine is director, and Stephanie Wash serves as senior editorial producer.

Roger has been a Disney fan since he was a kid and this interest has grown over the years. He has visited Disney Parks around the globe and has a vast collection of Disney movies and collectibles. He is the owner of What's On Disney Plus & DisKingdom. Email: Roger@WhatsOnDisneyPlus.com Twitter: Twitter.com/RogPalmerUK Facebook: Facebook.com/rogpalmeruk
View all posts
Tags: soul of a nation