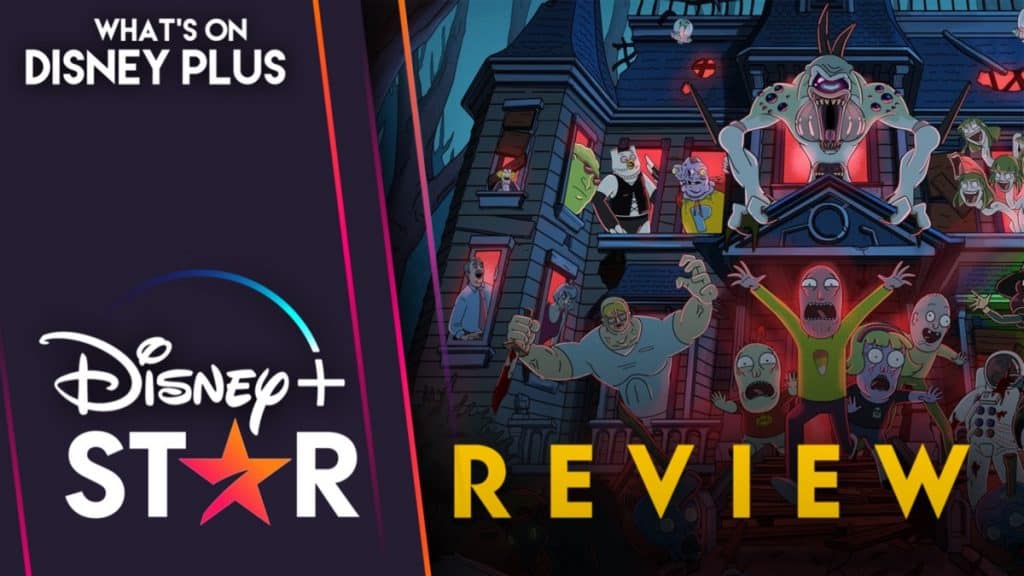 In this animated anthology special, Leroy (Justin Roiland), Reggie (Zach Hadel) and Cheruce (Pamela Adlon) Paloni are excited to host their Halloween special for Hulu but frustrated by a non-existent budget. They try to figure things out as they go, introducing numerous short films to the audience in the process. Of course, this is Halloween, so things quickly get out of control and the siblings are sent on a wild adventure that plays with and spoofs the many tropes of the horror genre. Forget hosting, the Palonis need to focus on surviving…

If you’re a longtime subscriber of Disney+ internationally (or Hulu in the US), you’re likely to have sampled at least some of the offerings from 20th Century Animation. More precisely – given its apparent popularity – you’ve probably watched at least an episode or two of Solar Opposites by Justin Roiland. With that series doing so well, (the show is renewed for 2 more seasons already) Disney are smart enough to get more content from the Rick and Morty co-creator. Ironically, The Paloni Show is actually strongly influenced by an early rejected pilot of the same name from before Roiland hit it big on Adult Swim. So can a concept turned down in the past be retooled for success in 2022? Well, an anthology is always a tough sell thanks to the inherent tonal inconsistency of the various different stories. However, it’s creative enough for me not to dismiss it outright. Let’s take a deeper look.

The three Paloni siblings are pretty much the only connective tissue of this anthology, with the hosts starring in the wrap-around story throughout the roughly 1-hour running time. They’re all relatively amusing, admittedly shallow characters that bounce around from scenario to scenario while sending us into the various shorts. All 3 get some decent one liners and the bursts of curse word-filled ranting that the studio has become somewhat known for land at least some of the time. But I have to admit that I’m starting to have the problem where the voices for these various projects are starting to sound the same to my ear and it’s frankly getting distracting. On top of all that, the story leans so heavily on the horror tropes that it’s predictable more than funny. 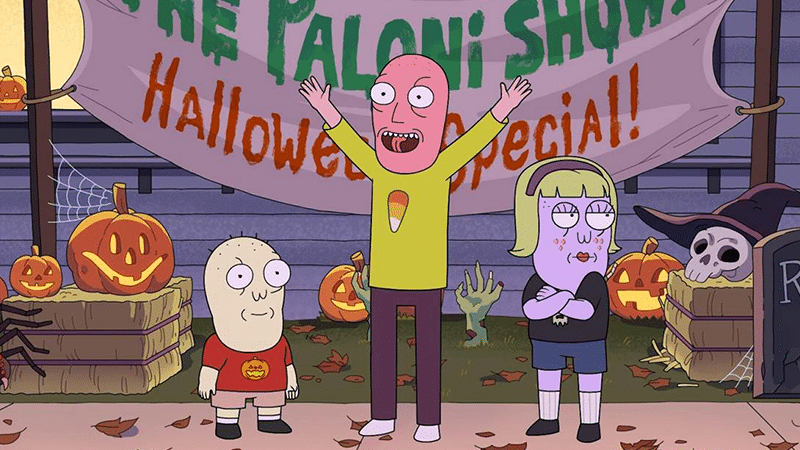 Thankfully, you don’t come to an anthology film for the wraparound story and when it comes to the various shorts, I can be somewhat more enthusiastic. If the connective story feels tired and uninspired, then the shorts themselves are a potential shot in the arm for this studio. I think it’s fair to say at this point that 20th Century Animation has a style throughout all of their more recent shows. I think it’s mean-spirited to call it “bad” (though that is, of course, subjective) but the look of their TV has gradually become very similar looking and perhaps even homogenised. Well, the shorts within the Paloni Show absolutely cannot be accused of that. We have Anime-inspired pieces, claymation, live-action and much, much more. For those paying attention, you’ll even notice early online animation pioneer David Firth (of “Salad Fingers” fame) getting a spotlight in this showcase. And yes, his short is the kind of surreal, disturbing concept you’d expect from him, so he hasn’t been diluted by the “mainstream” on this occasion.

Speaking of people getting a spotlight, I’d be remiss if I didn’t mention that one of the shorts features the apparent last ever performance of the late, great Gilbert Gottfried. Remember, we’re talking a 5-minute skit here, so there really isn’t too much to critique. What’s more, the dialogue in the short is (intentionally) delivered like stilted, dubbed dialogue. In fact, his is the one that I believe to be at least partially inspired by anime. But even with all of that said, Gilbert still shows signs of the energy he was so well known for. This is not the performance of an ill man. So it’s rather heartwarming to hear him one final time. Sure, it would have been nicer if he bowed out with a major film role but Mr. Gottfried didn’t have an ego. He thought nothing of doing guest appearances for YouTubers in more recent years. So all things considered, perhaps seeing him bow out on a relatively low-key streaming special designed to give lesser-known animators a chance is quite fitting.

The problem is, this show’s strength is also its biggest weakness. Like I said, it is very varied. Perhaps confusingly so. The tone, style and sense of humour bounces around left and right. If you’re lucky, several shorts in a row land with you and you’re hopefully invested enough to get through any that don’t. But if  they don’t click, you’re probably going to bail out within the first 20 minutes. And that’s the danger of a scattershot anthology. In theory, it should catch the eye of a larger audience. In practice though, it’s quite likely to leave everyone feeling underserved. And even as someone who was lucky enough to get a decent amount of entertainment from the concept, the lack of cohesion combined with a lack of interest in the story that was meant to keep it all together means I can offer nothing more than a lukewarm recommendation at best.

The Paloni Show! Halloween Special! is available in many countries on Disney+ internationally, including the UK and Ireland, Canada, Australia and more. US readers can find the special on Hulu.

What are your thoughts on “The Paloni Show! Halloween Special!”?

Jon has been a Disney fan all of his life. From wearing out those expensive VHS tapes and visiting Disneyland Paris as a child to becoming a huge fan of the MCU in adulthood, Disney has helped shape some of the happiest, most fun moments he can remember.
View all posts
Tags: "The Paloni Show! Halloween Special!, Reviews, star