For the first time since 2019, San Diego Comic-Con is set to return this summer with an in-person event from Wednesday 20th July through to Sunday 24th July 2022.   While there has been lots of speculation that Marvel Studios won’t be returning this year with a huge Hall H panel, due to Disney hosting its own Marvel Studios presentation at its D23 Expo event in September, it looks like Marvel Studios will have a presence at the event after all.

With just a month until the event, some new banners are being installed around Gaslamp and San Diego, and Outside Comic-Con has shared an image of a banner featuring the upcoming Disney+ Original series, “She-Hulk: Attorney At Law”, along with the SDCC logo. 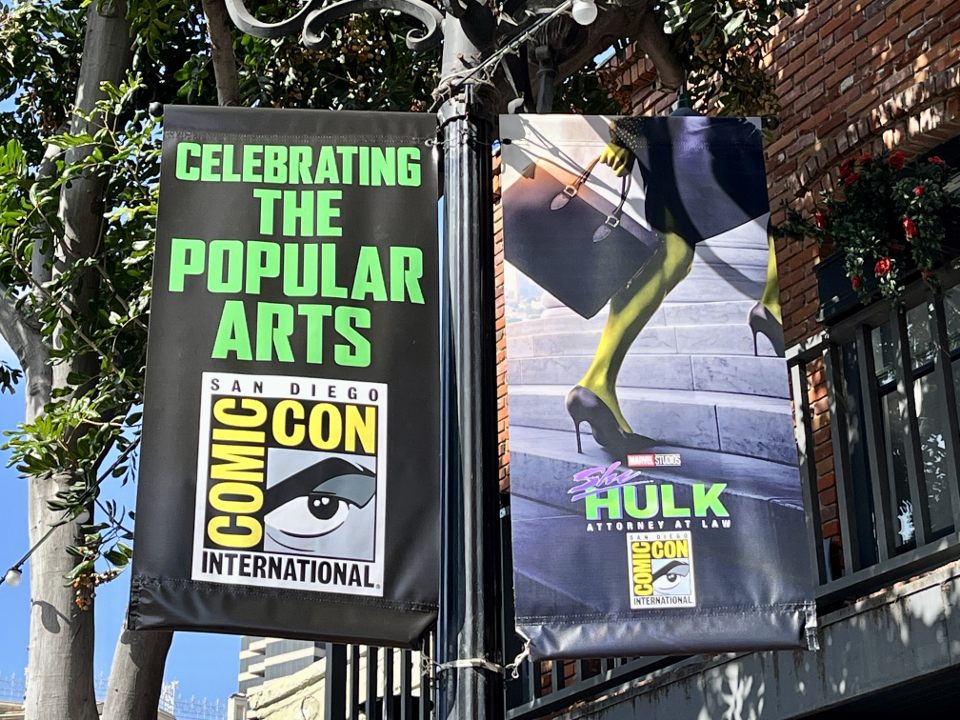 It shouldn’t come as a huge surprise to see Marvel Studios promoting the new “She-Hulk” series at San Diego Comic-Con, because the show will debut on Disney+ on Wednesday, 17th August 2022, a few weeks before the D23 Expo, so promoting the show at SDCC makes sense.

Disney has previously installed banners around San Diego during past events for films like “Avengers: Endgame”, “Ant-Man” and “Guardians Of The Galaxy”.

It’s not yet clear what Marvel Studios is doing at SDCC just yet. Hopefully, some new details will be revealed soon.  But with several Marvel shows like, “I Am Groot” and “She-Hulk: Attorney In Law” coming before D23 Expo, plus with a few more episodes of “Ms Marvel” and the new film, “Thor: Love & Thunder” being released in early July, there’s still plenty of new Marvel content to promote at SDCC.   It wouldn’t be a huge surprise to see Marvel host some smaller panels to promote these Marvel projects.

“She-Hulk: Attorney At Law” is a new comedy series starring Tatiana Maslany as She-Hulk/Jennifer Walters, a lawyer who specializes in superhuman-oriented legal cases.  The series follows Jennifer Walters as she navigates the complicated life of a single, 30-something attorney who also happens to be a green 6-foot-7-inch superpowered hulk.

And SDCC Blog is also reporting that Disney+ will have a booth at the event, taking over the ABC booth slot.

Do you hope to see some promotion of “She-Hulk: Attorney At Law” at SDCC?

Roger has been a Disney fan since he was a kid and this interest has grown over the years. He has visited Disney Parks around the globe and has a vast collection of Disney movies and collectibles. He is the owner of What's On Disney Plus & DisKingdom. Email: Roger@WhatsOnDisneyPlus.com Twitter: Twitter.com/RogPalmerUK Facebook: Facebook.com/rogpalmeruk
View all posts
Tags: Marvel, sdcc, she-hulk