Disney has announced that the Searchlight Pictures film “Nomadland” will be coming to Disney+ in the United Kingdom and Ireland on Canada on Friday 30th April.  “Nomadland” will also be coming to cinemas when they reopen, but with the current restrictions in place, cinemas can’t reopen until mid-May at the earliest. 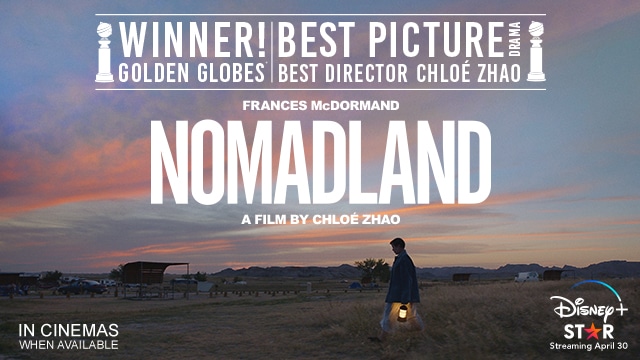 It was recently announced that the film would also be coming to Disney+ in Canada on April 9th.  The film is also available on Hulu and in some cinemas in the United States.

The film follows Fern (McDormand), a woman who, after the economic collapse of a company town in rural Nevada, packs her van and sets off on the road exploring a life outside of conventional society as a modern-day nomad. The film features real nomads Linda May, Swankie, and Bob Wells as Fern’s mentors and comrades in her exploration through the vast landscape of the American West.

Will you be checking out “Nomadland” when it arrives on Disney+ in April?