Disney is set to release the new live-action version of “Mulan” on September 4th with Premier Access, where viewers can watch “Mulan” before it’s available to all Disney+ subscribers.

Disney+ will offer Premier Access to “Mulan” for $29.99/£19.99/€21.99 on disneyplus.com. Once you have Premier Access to Mulan, you can watch as many times as you want on any platform where Disney+ is available.

And we now have a rough idea of how long it might be before “Mulan” is available for everyone, as in the United Kingdom, the “Mulan” film page stated that the film would be available to all Disney+ subscribers on December 4th.

This is just 3 months after the “Premier Access” is released.  Previous big Disney films such as “The Lion King”, “Aladdin” and “Star Wars: The Rise Of Skywalker” have taken around 6 months or more to go from a cinema release to Disney+.  Though recently during the Coronavirus situation, some movies such as “Frozen 2” and “Onward” were made available earlier to Disney+ subscribers.

Disney recently updated the film page, removing the release date for all Disney+ subscribers.  So this could have been because the information is incorrect or they don’t want people to know exactly when it will be released to everyone, to encourage them to purchase the Premier Access pass.

UPDATE – The date has now been re-added to the Disney+ app, confirming the date it will be available to all Disney+ subscribers. 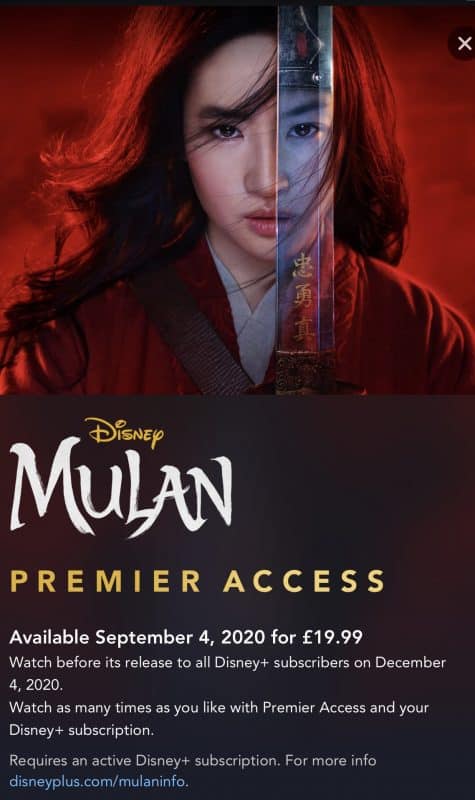 Are you going to purchase Premier Access or wait until it’s included in your Disney+ subscription?