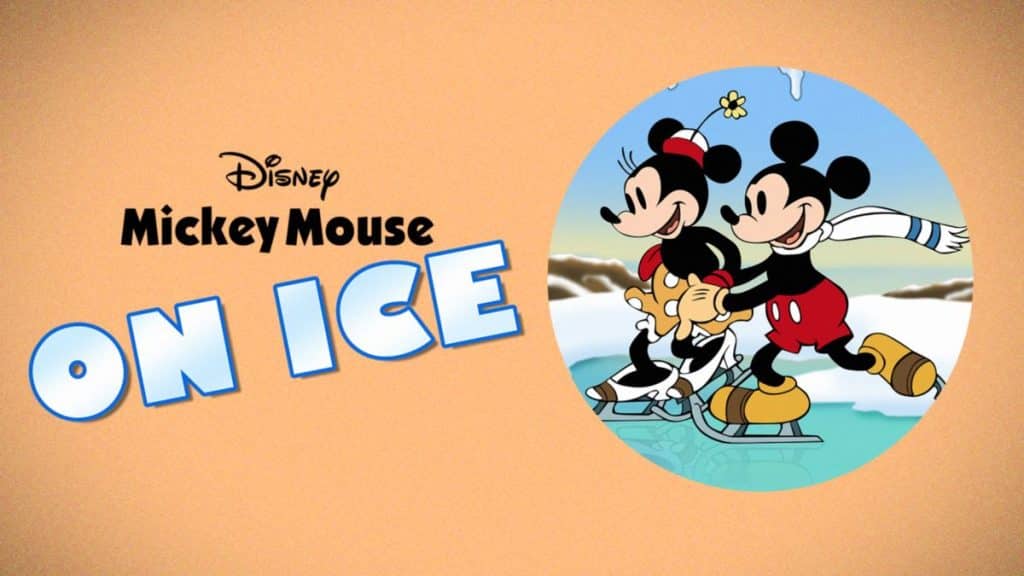 It’s a nice winter day and Mickey and friends are enjoying a nice day on a frozen lake in “Mickey Mouse On Ice.” Mickey and Minnie are enjoying a romantic day of ice skating, Goofy is trying to go ice fishing, but Donald is trying to play pranks on Pluto who is lounging by a warm fire. But, things take a harrowing turn when Donald ends up in trouble with a kite and Mickey must save him, leading to Donald ending up in Goofy’s fishing hole.

My absolute favorite part of this short is the interactions with Donald. He is being a prankster and I love early, vindictive Donald because he always gets his comeuppance in the funniest way possible. Watching Donald stuck to a kite and about to fly over a waterfall until Mickey saves him is the funniest part of this entire short. My only complaint about Donald is he isn’t wearing something sailor themed like we’re used to seeing. I know he’s wearing a sweater because it’s cold, but a sailor sweater would’ve been really cool here.

My least favorite part is the Mickey and Minnie segment. It’s not bad. It’s actually really good and really well animated, it’s just Donald and Goofy steal the show from them. They skate, there’s some trouble, Mickey saves Minnie but ends up in a little trouble himself. It’s a bit formulaic, but that’s not really an issue. Formulas can be good when they work and Mickey’s formula has worked since the 1920s. If the whole short was just Mickey and Minnie trying to have a nice day ice skating and some new hardship kept coming up, it would be a good short. The additions of Donald and Goofy just took it from good to great. 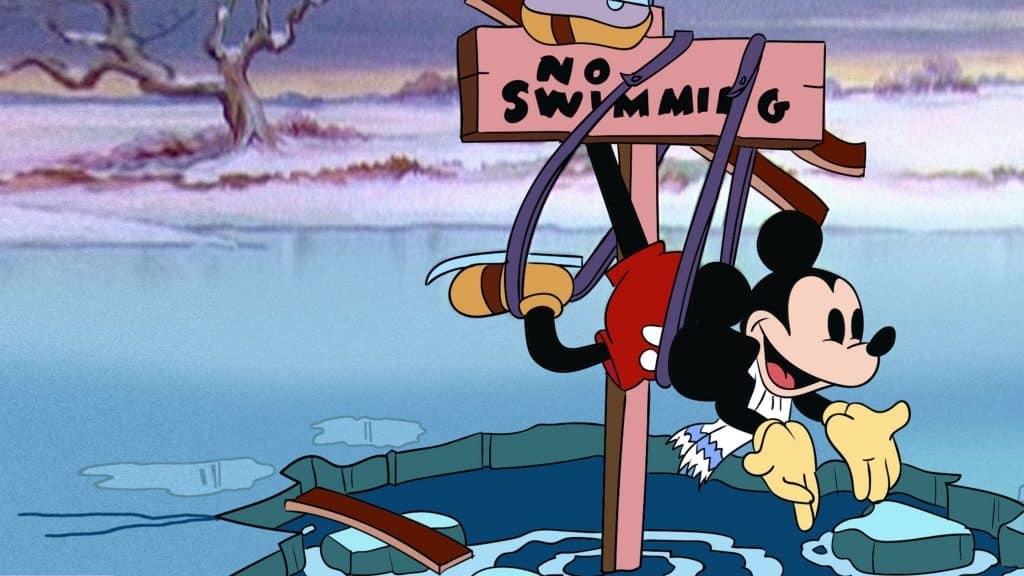 Let’s talk about Goofy’s segment. When I first saw him using a club to ice fish, I assumed this would be my favorite part of the short. I couldn’t stop laughing at the interactions with Goofy. I don’t know if that heightened my enjoyment of Donald’s segment, but I was already belly laughing from Goofy trying to fish and the fish grabbing the club and hitting Goofy with it. It was something you could see coming from a mile away and, yet, it was still awesome.

Finally, the segments are all tied together when Mickey rescues Donald. Donald ends up underwater and surfaces at Goofy’s fishing hole. Goofy, tired of being outsmarted by the fish is ready with the club to hit the fish when it surfaces. That, of course, leads to Donald getting hit in the head with the club. It encapsulates the characters of Goofy and Donald so perfectly. Donald isn’t evil, but he’s kind of a bully early on. He gets in trouble, is saved and then gets a hit on the head for his troubles. Goofy is well-meaning but will usually mess something up. He’s prepared for the fish, but it’s Donald that surfaces at his moment of preparation. It’s a well put together short that I think anyone can enjoy.

What did you think of “Mickey Mouse On Ice?”

Jeremy has been a big Disney fan since he was a kid growing up during the Disney Renaissance. One day he hopes to go to every Disney Park in the world.
View all posts
Tags: disney, Mickey Mouse On Ice, retro review, review