The first every Marvel Studios live-action series “WandaVision” has finally arrived on Disney+ and let’s just say, it’s not your usual take on superheroes.

The show sees in Elizabeth Olsen return to play the Scarlet Witch aka Wanda Maximoff and Paul Bettany returns as Vision, making the jump from their appearances in the Avengers movie to their own show.

This not only marks the start of the first Disney+ shows, but its also the start of a brand new phase of the Marvel Cinematic Universe and the show will set up future shows and movies such as Doctor Strange: The Multiverse of Madness and the third Spider-Man movie.

No doubt, many casual Marvel fans are going to be extremely confused with what “WandaVision” is, the first two episodes are unlike anything we’ve ever seen, since each episode is set in a different time period, as part of a traditional American sitcom.

The first episode is set in the 1950s and sees Wanda trying to put on a special meal for her husband, only for it to turn into a meeting for Vision’s boss and wife.  There are all kinds of classic humour from the time period, which feels very forced, but is there to remind you that we “are” watching an episode from the 1950s.    This episode is absolutely crazy and you’ve got no idea where the show is going or why, but you know something is off, as does Wanda and Vision, as they have no memory of anything.   It instantly makes you hooked to find out what is going on and you want to jump into the second episode.

Luckily for us, Disney decided to drop two episodes to kick start the series and I think that probably was for the best, because I like I suspect most people will do, is instantly jump into the second episode to find out what’s going on. 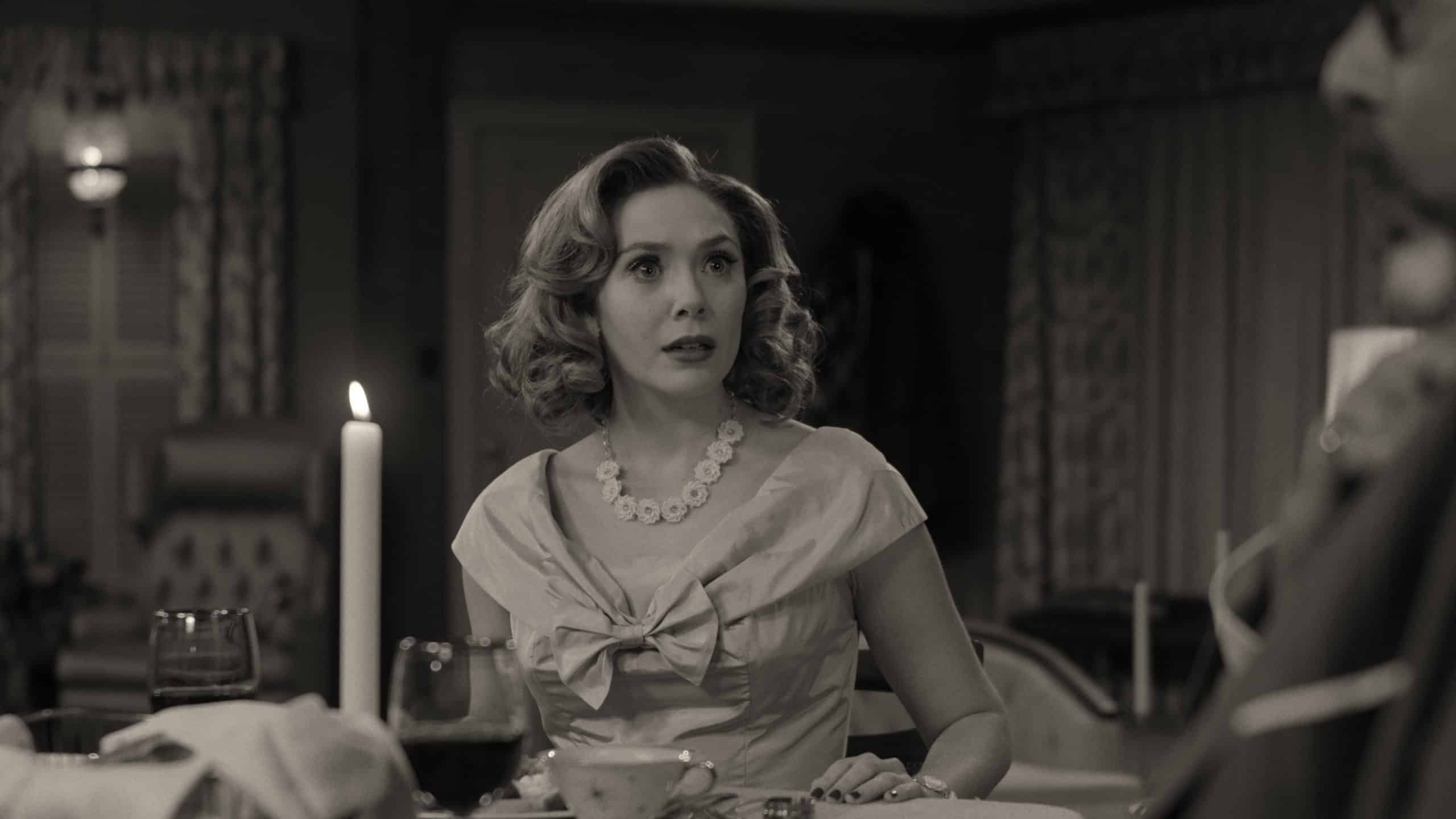 The second episode is set in the 1960s and sees them trying to fit into the local community by putting on a magic show in a talent show. Not something you’d instantly expect to be the major plot of a Marvel series, but it helps push along the narrative that things aren’t right.  The biggest giveaway is the small dashes of colour that highlight something isn’t right.  Plus there is this overall feeling that they’re being watched and we get our first look at “Sword”.

This second episode does a much better job in setting up that something isn’t right and at one point the entire episode just comes to a halt when Wanda rewinds the show to redo it.

Make no mistake, this is one of the craziest shows I’ve seen in a while.  It’s something I don’t think they could do properly in a movie, because these episodes give us time to get into their world.  As someone who grew up with my parents old black and white TV, along with watching many classic shows like “The Addams Family”, “The Munsters” and “Laurel and Hardy”,  these episodes did remind me of shows from that period.  However, was getting a little restless during the second episode, as the novelty was wearing off.  Thankfully the episode ended in a technicolour blast and another leap into a new decade.

The first two episodes of “WandaVision” are bonkers, they make very little sense and will no doubt leave many Marvel fans looking for clues into what’s going on, who are the villains and more.  But it is also a risk, these two episodes are very different and people don’t always like different.

I’m not sure these are episodes and would want to go back to watch again, however, it could be fun going back once we’ve seen the whole season to spot the hints.

I really enjoyed these episodes, but I wasn’t blown away with them.  I’m desperate to know what happens next, as the series is set to eventually turn into what we would usually expect from a Marvel movie.    The first two episodes of “WandaVision” are setting the tone and laying the foundation, allowing us time to be in their world and experience it, something that wouldn’t be possible with a movie.

All I know is that I’m going to be sat on my couch every Friday morning to find out what happens next.