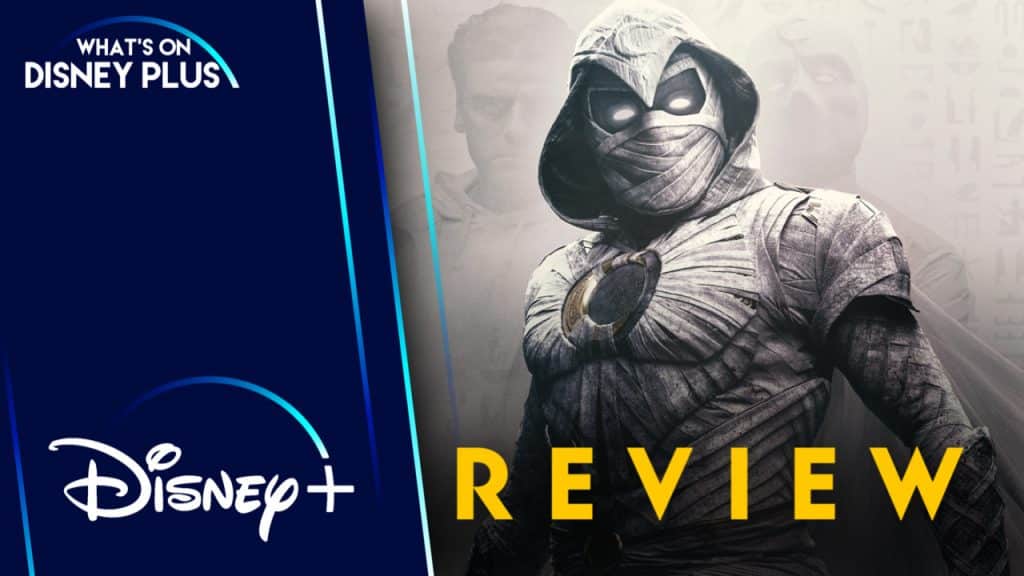 “Moon Knight” is the latest Marvel Studios series for Disney+ and tells the story of Steven Grant, a mild-mannered gift-shop employee, who becomes plagued with blackouts and memories of another life.  At night he chains himself to his bed and sets small traps for himself, so he’ll know if he’s escaped again.

Then one day, everything changes, when he discovers he has dissociative identity disorder and shares a body with mercenary Marc Spector, who has made some powerful enemies, who are trying to track Marc down to recover a stolen Egyptian artefact.

Together, they must work together to save themselves from a deadly mystery among the powerful gods of Egypt, that takes them from the streets of London to the tombs of Egypt.  Things get even more complicated when Marc’s wife turns up!

The series is very dark and gritty, but it has a unique humour that Steven provides  Since he is just a bumbling idiot, who you have complete sympathy for, since the story is told from his point of view.   The humour is very different from other Marvel shows and movies, because of the unique nature of the split personality disorder.

One of the interesting things about Marvel releasing four episodes of the show early, is this is the first time this has happened for a new Marvel show.  Since it’s usually just a couple of episodes, which shows how much faith they have in the series.

I’m completely hooked and can’t wait to watch the rest of the series, especially since the cliffhanger in the fourth episode is so shocking, and I now have to wait until it’s out on Disney+.

It’s become a bit of a cliche to say, “this is unlike anything I’ve seen in the MCU”, but “Moon Knight” is completely different.   It’s completely separated from the rest of the Marvel universe and stands alone as its own series. It has a unique style and feel to it.  The way it incorporates London and Egypt into being part of the story is fantastic.

I’ve heard people compare “Moon Knight” to “Batman” on so many different occasions since the show was announced, but honestly, “Moon Knight” is hugely different.   When he is fully suited up and running across the skyline, gliding from rooftop to rooftop, it does look a bit like “Batman”, but that’s literally the only comparison I can make.  And when Mr Knight comes along, well, that’s very different again.

“Moon Knight” is hard to describe. It has elements of “Indiana Jones”, meets “Split”, with a sprinkling of “Legion”. I love it and can’t wait to watch more episodes.  It’s a fantastic series. It’s got a new character that many of us probably have no clue about, making “Moon Knight” so much more fascinating, because this isn’t your typical superhero origin story.

The first episode of “Moon Knight” arrives on Disney+ on Wednesday 30th April 2022.

Roger has been a Disney fan since he was a kid and this interest has grown over the years. He has visited Disney Parks around the globe and has a vast collection of Disney movies and collectibles. He is the owner of What's On Disney Plus & DisKingdom. Email: Roger@WhatsOnDisneyPlus.com Twitter: Twitter.com/RogPalmerUK Facebook: Facebook.com/rogpalmeruk
View all posts
Tags: Marvel, moon knight, review