A new clip from the theme song, “Moon Girl Magic,” was also revealed during the panel.  The theme song has been written and produced by executive music producer Raphael Saadiq and performed by series star Diamond White (voice of Lunella aka Moon Girl).

The “Marvel’s Moon Girl and Devil Dinosaur” soundtrack, from Walt Disney Records, is set for release on February 10th 2023 and will feature songs from the first season. Next summer, fans can also look forward to a brand-new assortment of toys, apparel and more based on the series.

Based on Marvel’s hit comic books, the series follows the adventures of 13-year-old super-genius Lunella Lafayette and her 10-ton T-Rex, Devil Dinosaur, whom she accidentally brings through time into present-day New York City. Equipped with Devil’s fierce loyalty and brawn, the loving support of her family and best friend Casey, Lunella sets out to make a difference and protect her Lower East Side neighborhood from danger. 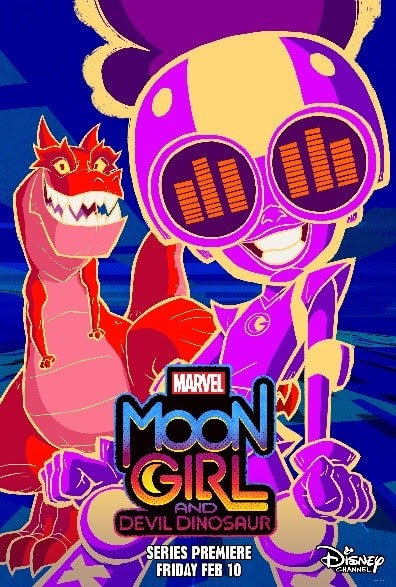 Are you looking forward to watching “Marvel’s Moon Girl and Devil Dinosaur”?

Roger has been a Disney fan since he was a kid and this interest has grown over the years. He has visited Disney Parks around the globe and has a vast collection of Disney movies and collectibles. He is the owner of What's On Disney Plus & DisKingdom. Email: Roger@WhatsOnDisneyPlus.com Twitter: Twitter.com/RogPalmerUK Facebook: Facebook.com/rogpalmeruk
View all posts
Tags: Marvel, moon girl and devil dinosaur, Nycc