What's On Disney Plus > Blog > Brands > Marvel > Marvel Live-Action Series And Updated Parental Controls In The U.S. Coming To Disney+ 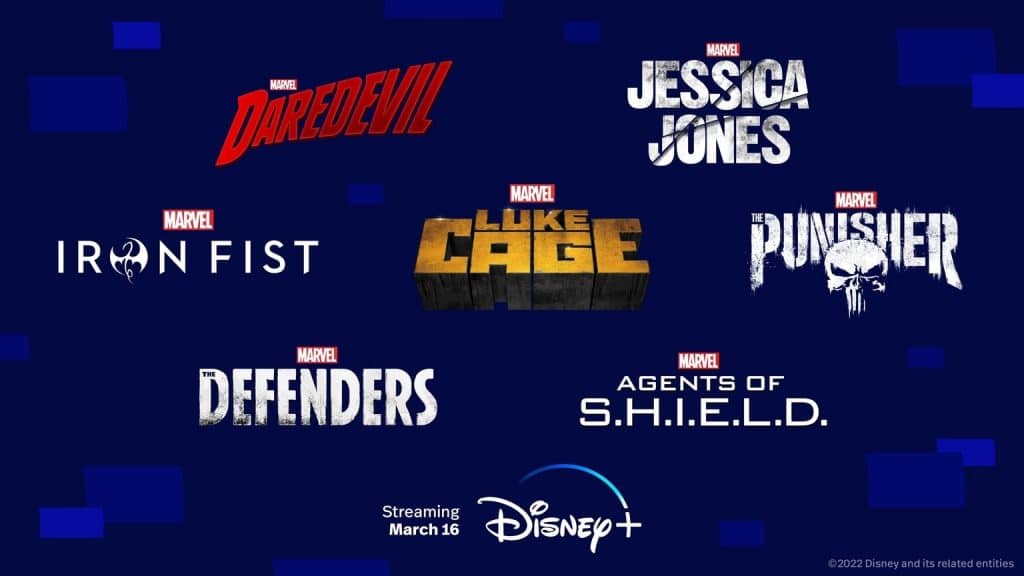 This week, Disney removed a large number of items from Netflix including all of the Marvel series, leading many to speculate on the where they might go.  Last week, Disney announced the series would be coming to Disney+ in Canada, leading many to wonder if Disney would do the same for the US.

Today, Disney has announced, that on March 16th, Disney+ will add more Marvel live-action series titles to its expansive content offering in the U.S., Canada, U.K., Ireland, Australia, and New Zealand with the addition of “Daredevil,” “Jessica Jones,” “Luke Cage,” “Iron Fist,” “The Defenders,” and “The Punisher,” plus “Marvel’s Agents of S.H.I.E.L.D.” in the U.S., giving fans access to more from the Marvel collection, all in one place. With the addition of these titles, Disney+ will concurrently release an update to its Parental Controls in the U.S. that will prompt all subscribers to update their settings.

“Disney+ has served as the home for some of the most beloved brands in the industry, and the addition of these live-action shows brings more from the Marvel brand together, all in one place.  We have experienced great success with an expanded content offering on Disney+ across our global markets and are excited to continue that here in the U.S. as well by offering our consumers not only great content with the new Marvel additions, but also a set of features that help ensure a viewing experience most suitable for them and their family.”

These Marvel series will also be available across all other Disney+ markets later this year.

The dedicated Marvel brand page on Disney+ already serves as home to the largest Marvel collection with hundreds of hours of movies and shows. This includes the Marvel Studios movies from the Marvel Cinematic Universe such as “Avengers: Endgame” and “Black Panther” as well as other Marvel movie franchises like “X-Men”; Disney+ Original series like “WandaVision,” “The Falcon and The Winter Soldier,” “Loki,” and “Hawkeye”; animated series, including the Disney+ Original series from Marvel Studios, “What If…?”; specials and shorts, and documentaries that go behind the scenes like “Marvel Studios Assembled.” Updates to Parental Controls in the U.S.

When opening Disney+ for the first time on or after March 16, all subscribers in the U.S. will be prompted to update their Parental Controls. This includes the option to select content ratings restrictions for each profile as well as to add a PIN to lock profiles. Those that choose to keep their settings the same will continue to enjoy Disney+ as they always have within a TV-14 content rating environment, with the option to make changes at any time under Profile settings. What do you think of this decision?

Roger has been a Disney fan since he was a kid and this interest has grown over the years. He has visited Disney Parks around the globe and has a vast collection of Disney movies and collectibles. He is the owner of What's On Disney Plus & DisKingdom. Email: Roger@WhatsOnDisneyPlus.com Twitter: Twitter.com/RogPalmerUK Facebook: Facebook.com/rogpalmeruk
View all posts
Tags: daredevil, Marvel, parental controls