The Sanderson sisters return 300 years after being hanged to wreak havoc on Salem, Massachusetts until two teenagers, a girl, a seemingly immortal cat and a zombie find a way to stop them in the Halloween classic, “Hocus Pocus.” The film was actually a box office dud that took on a life of its own after home video release and it being shown on TV, at least in the United States.

This is my all time favorite Halloween movie. I watch it multiple times every October. I’ve told my wife that I will always put this film on when I find it on TV and now that it’s on Disney+, I don’t have to worry about commercials. I love the historical references to the Salem witch trials and its modern-day (at least for 1993) take on the issue. Bette Midler, Kathy Najimy and Sarah Jessica Parker are wonderful as Winnifred, Mary and Sarah Sanderson and Midler’s performance of “I Put a Spell on You” is masterful. She’s an amazingly talented actress and singer and it shines in this movie. 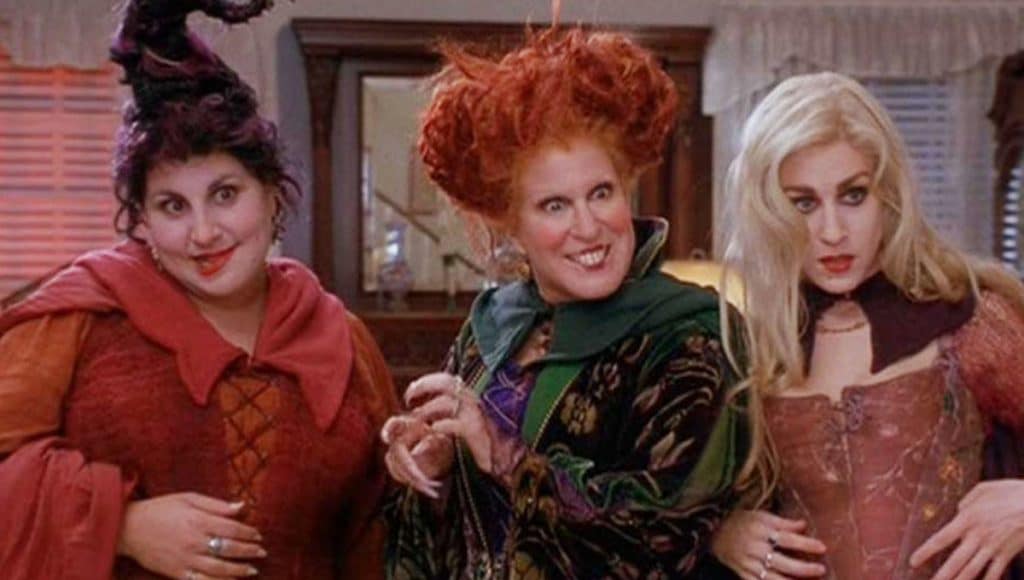 As a kid, I thought Max was the coolest character. The California kid who took down the evil Sanderson sisters was amazing. As I’ve gotten older, he’s actually kind of lame. He thinks he’s too good for his new home town’s traditions, he’s kind of creepy when trying to impress Allison, he causes major issues with his little sister and he ignores the point of the story and brings the Sanderson sisters back to Salem. He grows throughout the film, and it’s a very impressive character arc for what was essentially a kids movie, but early movie Max is not a great character.

However, Alison, Dani and Thackery Binx are some of the most fun characters in this film. Alison is tough as nails, stands up to Max and holds her own against the Sanderson sisters. Dani may be presented early on as the annoying little sister, but she proves herself invaluable as they battle the Sandersons. And, Thackery Binx is the boy who tried to save his sister turned into a cat. His efforts to protect his sister may have failed, but they serve as a great inspiration in Max’s character growth as he goes from not wanting to be around his sister to risking his life for her. Thackery Binx is who Max should’ve been at the start and who Max becomes by the end of the film.

The one thing I truly don’t understand about this film and its history is why it was released in July. While I understand that it was released the same year as another cult classic, “The Nightmare Before Christmas,” and they didn’t want the films to compete for audiences and cancel each other out, it makes no sense releasing this film in July. It’s a Halloween film not a summer film. Since Disney owned both studios that released the two films, they could’ve staggered the releases to different points of October to make them both work. Granted, neither was a rousing box office success, they may be the two most famous Halloween movies around today.

What do you think about “Hocus Pocus?”

Jeremy has been a big Disney fan since he was a kid growing up during the Disney Renaissance. One day he hopes to go to every Disney Park in the world.
View all posts
Tags: disney, halloween, Hocus Pocus, retro review, review