What's On Disney Plus > Blog > Brands > Disney > Have We Entered A New Era Of Disney Animation? 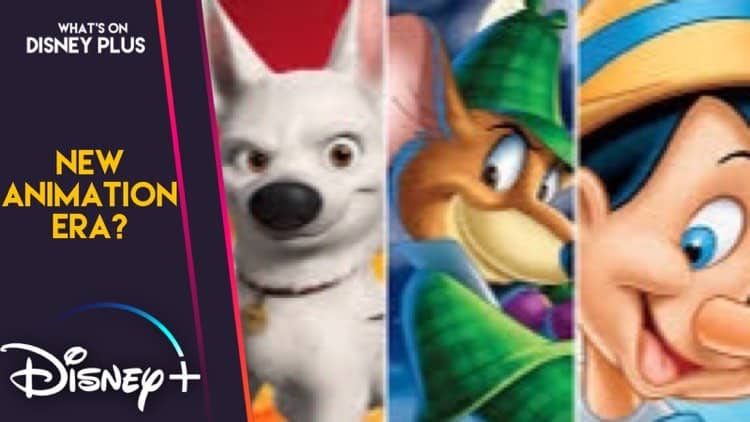 With the upcoming release of “Strange World,” the Walt Disney Animation Studios will release its 61st animated feature length film. Throughout those releases from 1937 to the present, fans and critics have divided the releases into eras of animation. While there’s no set parameters for what makes up an era, there’s usually a major event that helps people differentiate them. The Disney Revival started with “The Princess and the Frog” in 2009. Now, I want to know if we are still in the Disney Revival? Or have we entered an entirely new era of Disney Animation?

THE ERAS OF ANIMATION

As of right now, the Walt Disney Animation film library can be divided in seven distinct eras of animation.

As I mentioned, each is marked with some event that led to the change. World War II, the death of Walt Disney, and experiments with animation styles have been some of the notable reasons for the change. The Golden Age, Silver Age, Renaissance and Revival were all marked with impressive box office performances, and a few flops mixed in. The Wartime Era, Bronze Age and Experimental Age all experience less financial success. Have we experienced that event that leads us to move away from the Revival and into a new era?

I know no one wants to remember 2020, but the effects of the pandemic and the shutdown changed the way we view cinema and the box office. “Raya and the Last Dragon” went to theaters that were open and was shared on Premier Access on Disney+. It made $130 Million worldwide, which is good considering how many cinemas were closed, but vastly disappointing compared to the $1.4 Billion made by “Frozen II.” “Encanto” didn’t go to Premier Access, but only got a 30 day box office window before moving to streaming. It’s clear the pandemic along with the influx of streaming services have changed viewing habits and that could lead to another change in animation eras.

WHAT TO CALL THIS NEW ERA?

If we are in a new era, where did the last era officially end and what do we call this new era? As I’ve hinted at previously, I think the Disney Revival ended with “Frozen 2.” We see a drastic change in box office performance after that point. Yes, the pandemic is the cause of it, but we have that seminal moment, much like World War II or the death of Walt Disney. But for a name? My fellow “What’s On Disney Plus” writer, Jon Potter, suggested we call this the Streaming Era of Animation. “Raya and the Last Dragon” and “Encanto” both saw growth once they made it on to the streaming services. I think he’s on to something. Whether that ends up being the official name of the era and whether it ends up beginning with “Raya and the Last Dragon” is yet to be determined, but I believe the name is appropriate and the timing make sense.

I think we’re in the Streaming Era of Animation, and I think we would’ve eventually reached this point even if the world didn’t shut down. The pandemic may have sped up the transition, but we were always headed for a change. Let’s see how long before another animation era shift takes place.

What do you think? Are we in a new era of animation? If we are, does “Streaming Era” describe it well?

Jeremy has been a big Disney fan since he was a kid growing up during the Disney Renaissance. One day he hopes to go to every Disney Park in the world.
View all posts
Tags: Columns, disney, Eras of Animation, Walt Disney Animation Studios