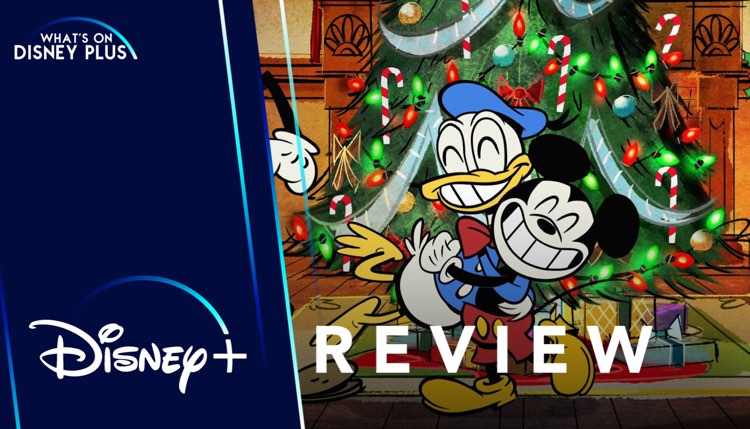 As Mickey, Minnie and Goofy get ready to celebrate Christmas, Donald and Daisy are getting ready to fly south for the Winter in “Duck the Halls: A Mickey Mouse Christmas Special.” Donald really wants to celebrate Christmas, so he decides to stay despite needing to leave the cold. But when he becomes sick; Mickey, Minnie and Goofy risk everything to fly him south and keep him safe. And, Santa helps the Daisy, Uncle Scrooge, Professor Von Drake and the rest of the ducks learn something about celebrating Christmas.

This is a really cute special. I love Mickey Mouse and I love Christmas, so this hits me right where I live. I completely understand Donald’s want to do anything and everything associated with Christmas despite getting sick from the cold weather. I also completely understand why Daisy is so frustrated with Donald. She has an idea of what will happen if they don’t fly south for the winter, even though it takes Professor Von Drake’s explanation for her to understand just how dangerous it is. I also really love that Santa shows up in the south and teaches the ducks a lesson about the celebration of Christmas. I bet all of the ducks would love to celebrate Christmas, even if it is in a warmer climate. Plus, as someone who grew up in the Southern United States, my Christmas days were usually mild, not tropical like was shown in this special for the ducks, but mild. My Christmases didn’t feel any less magical because there was no snow or because it wasn’t freezing cold. My Christmases were magical because of who I spend them with. It’s a good lesson for everyone to learn, because I bet Mickey, Minnie and Goofy could have just as magical of a Christmas in the warmer climate because they would be celebrating with Donald and Daisy.

If you’re looking for a cute, fun Christmas special to watch with the kids, I would definitely recommend this one. While not as good as “Mickey’s A Christmas Carol,” this was still a solid entry into the pantheon of Christmas specials. I will definitely be checking this one out again.

What did you think of “Duck the Halls: A Mickey Mouse Christmas Special?”

Jeremy has been a big Disney fan since he was a kid growing up during the Disney Renaissance. One day he hopes to go to every Disney Park in the world.
View all posts
Tags: Christmas, disney, Duck the Halls, review, Walt Disney Animation Studios