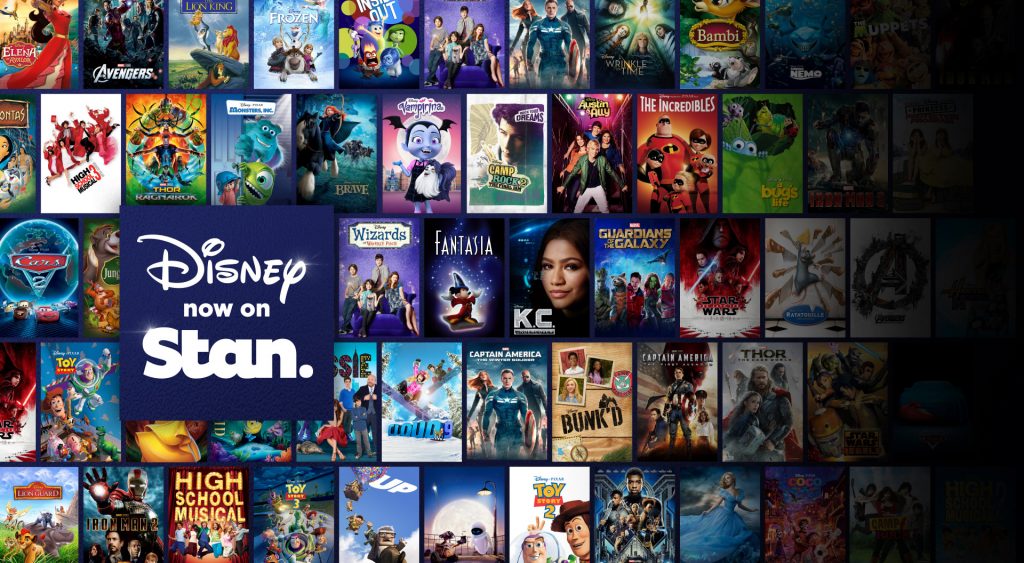 Disney’s new streaming service, Disney+, is set to launch in the US on November 12th 2019, however its international roll out has been left rather vague, other than they plan to launch in as many regions as possible with releases in Asia/Pacific, Latin America and Europe within 2 years of the US launch, which they are focusing on first.

Last December Disney signed a short term deal with Australian streaming service, “Stan”, to bring a large quantity of movies and shows onto the network.  However “Stan” never announced how long the contract was for, which is being reported that it will expire in October.

It’s has also been reported that Disney have registered two trademarks for Disney+, one was made on April 10th (the day before the Investors Day” and another one was registered on May 1st.  However these trademarks could have been registered regardless of the plans to launch in Australia.

Recently the chief executive Mike Sneesby spoke at the Morgan Stanley Australia summit about their plans.

“This year, the Disney deal is the case in point where we made investments within a fiscal year that were incremental to our plans at the start of the year, and we’re seeing payback on those investments in line with what our projections were inside the fiscal year,”

He also spoke about Disney+ launching in Australia:

“I think there is a perception that Stan licenses content and at the end of a licensing deal, well, maybe that deal is going to end and the studios just pop up shop right next door.  The opportunity cost that you have to give up in licensing in a market is significant, particularly when we’re paying a large amount of the licensing fees as part of our sustainable cost base. There is a big marketing cost that you have to invest on top of that. to be able to get yourself to a scale where your financial returns are back to where you were as a licensing business.”

It makes sense for Stan’s CEO to downplay the idea that they might lose the Disney content, if Disney decide to launch Disney+.

“If you look at the three big content giants that are there now in terms of content creators Disney … now merged with Fox having taken control of Hulu, is a business whose value is completely built on television, movies and entertainment.   If you look at other players: AT&T Time Warner the majority of their business still is in telco and Comcast, pay-tv and telco is still the cash cow of their business.  Understandably, Disney needs to move quickest and needs to have a strategy that they can face off the risk of direct-to-consumer competition of Netflix and the like.”

“Stan” is owned by the “Nine” TV network and the following day Nine chief executive Hugh Marks, spoke at the Mumbrella360 conference and said:

“the offshore studios were considering streaming as a “US thing first and in Australia they will look at [whether there] is there an opportunity for them to monetise their content without having to take the risk of going direct-to-consumer.  If we put Disney up on a [streaming] service just on its own at the moment let alone what they might do in the future … Disney don’t make a lot of product every year.  So you get through the Disney catalogue pretty quickly if it was a standard [streaming] service.”

This again seems to be taking a shot at Disney, saying they aren’t producing enough content to warrant operating their own streaming service in Australia.   Which is why Disney+ is expected to launch in Australia at a much lower price than “Stan” and “Netflix”, which are priced at $9.99 a month.

Disney are planning on taking Disney+ and its other streaming service, Hulu, global, so while these short term deals are beneficial to both parties right now, the world of television is changing fast and the Australian networks like Nine are trying to combat the growing popularity of streaming.

At April’s Investor Day, Disney streaming services president Michael Paull spoke about not being able to launch Disney+ in every country and said:

“in those places where we believe we will most likely need to launch with distribution partners, we’ve allotted additional time to allow for integration with their platforms”.

Nine’s Hugh Mark was also asked about the possibility of “Stan” being re-branded as Disney+ in Australia:

“There are a number of ways for us to look at how Disney+ can get branding in the market without having to change the name of Stan – Stan is an aggregator and always will be.”

With Disney planning on having 60 to 90 million subscribers to its Disney+ within five years and with more customers subscribing to global platforms like Netflix, issues like this are going to take a little longer to sort out, especially with Disney focused on its US launch first.  Hopefully Disney will lay out its plans for different regions soon, since there are many fans who won’t be as supportive once they aren’t able to watch shows like Star Wars: The Mandalorian when the US is.

Are you subscribed to Stan?  Do you think Disney+ should launch in Australia?

Roger has been a Disney fan since he was a kid and this interest has grown over the years. He has visited Disney Parks around the globe and has a vast collection of Disney movies and collectibles. He is the owner of What's On Disney Plus & DisKingdom. Email: Roger@WhatsOnDisneyPlus.com Twitter: Twitter.com/RogPalmerUK Facebook: Facebook.com/rogpalmeruk
View all posts
Tags: disney, stan