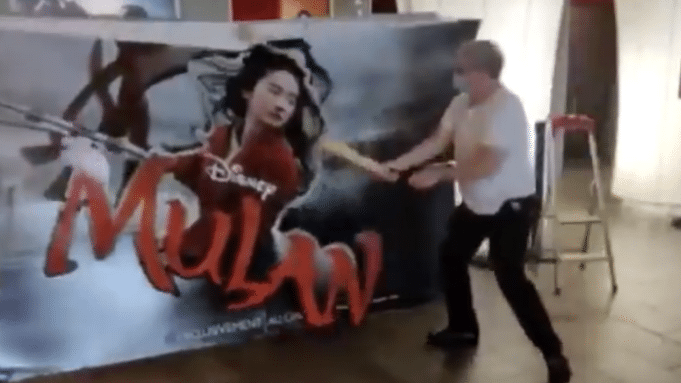 Disney has moved a number of movies from cinemas directly onto Disney+ including “Artemis Fowl” and “The One And Only Ivan”.  However earlier this week, Disney announced it would be sending the live-action version of “Mulan” to Disney+ as a premium rental, instead of a cinema release, except for in countries without Disney+.

This has led to many fans questioning if Disney has made the right move and if people will pay $29.99 for early access for “Mulan”.

But one French theatre owner didn’t like Disney’s decision to remove Mulan from the schedule and took a baseball bat to a huge “Mulan” foyer display stand.

Gerard Lemoine, who is the owner of the independent cinema, Cinepal, in the Paris, shared the video to Twitter and saying (translated)

“The reaction of an operator following Disney’s decision.”

“It’s really a huge effort to stay open right now for most of us, but we were assuming there would be some ambitious movie releases in the coming weeks.  By losing Mulan, we lost the possibility of offering our audiences a long-awaited film that would have helped us after these past hard weeks. It is also a bad message to send to the public [who had been expecting a theatrical release].”

Once purchased ”Mulan” will be available for as long as the account has a active Disney+ subscription. The film will be available on Disney+ to subscribers at a later date, much like how normal film releases have been.

Do you agree with this cinema owners reaction?