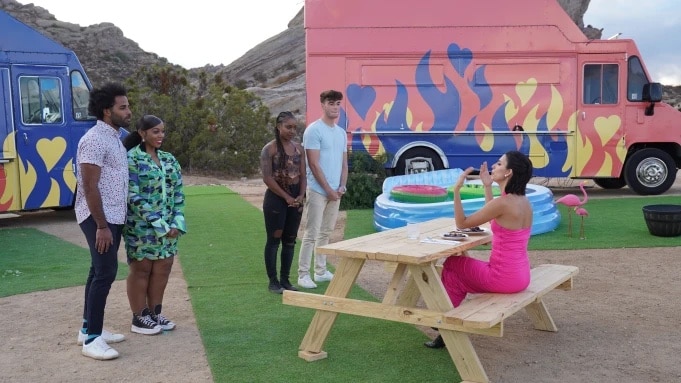 Disney’s Hulu has announced a brand new blind date food competition show called “Hotties’, which is going to be hosted by Jade Catta-Preta, who has previously hosted E!’s “The Soup”.

Set in food trucks in the desert heat, each 30-minute episode sees two pairs of sexy singles make a meal and choke down extreme spicy food challenges in a bid to fast forward the dating process and win a cash prize. Will battling the heat help them burn through first date facades to form a more authentic connection…or will it all just be a hilarious hot mess?

The dating competition will pit pairs of blind dates against each other in a battle to cook up date-night worthy dishes, all while attempting to eat incredibly spicy food.  Whichever couple has the best plate, best date, or both, wins a second date worth $2,500, or…they can split the cash, walk away, and promise to never see each other again.

Jade Catta-Preta said in a statement:

“I’m thrilled to be hosting this spicy treat! We could all use a funny distraction, so head on over to Hulu for some hot giggles.”

“Hotties has all the right ingredients – hot food, hot dates in the summer heat! Jade’s brilliantly funny delivery pairs perfectly with all the wild moments in this laugh-out-loud series.”

All ten episodes will launch on Hulu on August 16th 2022.  It’s unknown if this series will be released internationally on Disney+.

Roger has been a Disney fan since he was a kid and this interest has grown over the years. He has visited Disney Parks around the globe and has a vast collection of Disney movies and collectibles. He is the owner of What's On Disney Plus & DisKingdom. Email: Roger@WhatsOnDisneyPlus.com Twitter: Twitter.com/RogPalmerUK Facebook: Facebook.com/rogpalmeruk
View all posts
Tags: hotties, hulu