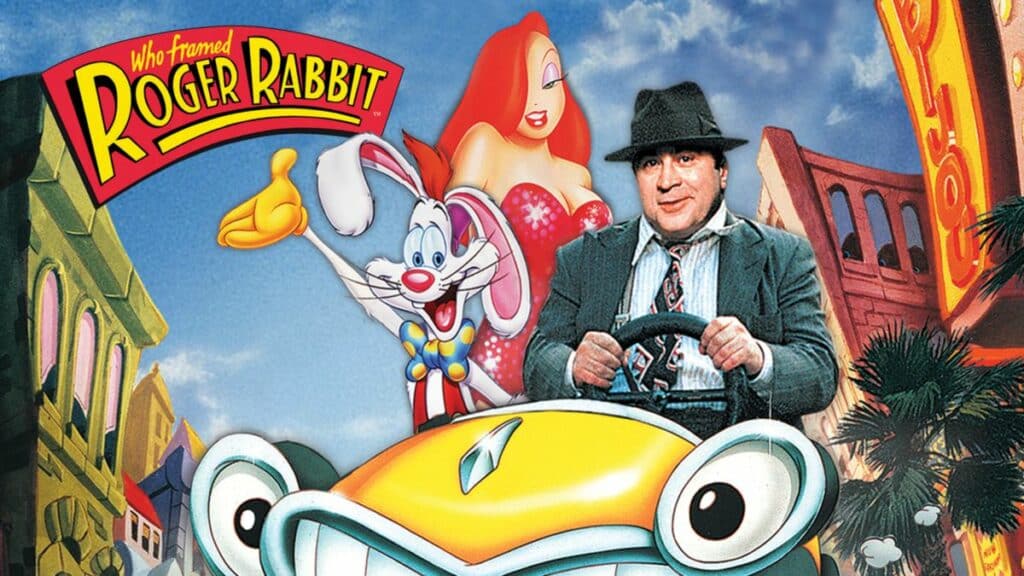 Disney and Warner Brothers join forces to unite animation and live-action in “Who Framed Roger Rabbit?” When Roger is accused of murdering a wealthy businessman who was photographed playing Patty Cake with Roger’s wife Jessica, it’s up to down on his luck private investigator Eddie Valiant to prove Roger’s innocence and help save Toontown from falling into evil hands. This is despite the fact Valiant hates toons after his brother was killed by one.

This film is a wonderful blend of live-action and animation. Disney had done this before with “The Reluctant Dragon” and Warner Brothers has done it since with “Space Jam,” but this remains the pinnacle of this type of film. When companies blend live-action and animation, they aspire to do it as well as “Who Framed Roger Rabbit?” Objectively speaking, this is a masterful bit of filmmaking. While the reveal that Christopher Lloyd’s character of Judge Doom is actually a toon; and the toon that killed Valiant’s brother; is a bit predictable, sometimes predictability can be inspired storytelling and that’s what happened here. While I recognize its objective greatness, on a subjective level, I didn’t enjoy this viewing. It’s perfectly fine. I wasn’t bored. I just didn’t enjoy it the way I did when I was a kid. The jokes fell flat for me. It felt like they were trying to use kid terms for double entendres and I didn’t care for it. As a kid, I laughed all the way through this movie. As an adult, the nostalgia wasn’t enough to carry it. And, while Judge Doom’s transformation was certainly scary as a kid, this time it was just meh. I don’t know if it’s because I knew it was coming or because I’ve seen worse in the intervening years since I last saw this, but it didn’t hold up for me.

This is a movie everyone should watch once. If you’re a fan of traditional 2D animation, it’s got something for you. If you enjoy silly, goofy moments, Roger Rabbit and Eddie Valiant provide them. I can see why this film is so beloved, even if it doesn’t hold up for me. I can’t promise you won’t be disappointed because I certainly was, but I can promise you’ll respect the effort put into it. It’s worth a viewing.

Jeremy has been a big Disney fan since he was a kid growing up during the Disney Renaissance. One day he hopes to go to every Disney Park in the world.
View all posts
Tags: disney, retro review, review, Who Framed Roger Rabbit