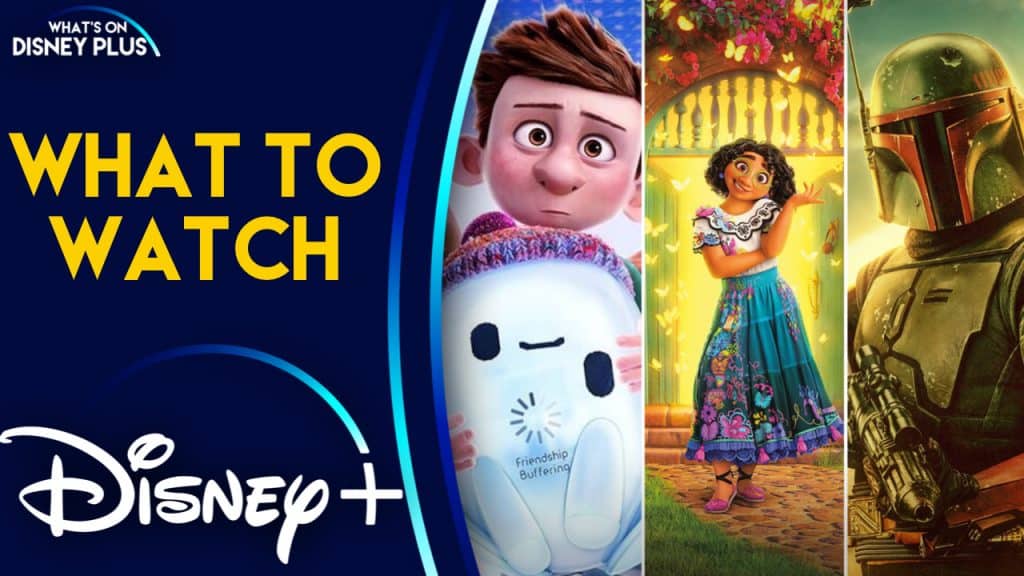 Sitting down in front of the telly over Christmas is one of the best things about the Christmas holidays. Watching films together on the couch, with the twinkling lights on the tree, blanket over everyone, snacks and a cuppa tea!

So if you’re looking for some great content to watch on Disney+ during the holiday season, I’ve picked out some of my highlights

It’s important to note, that some of these selections might not be available in every country.

My number one pick for this year’s Christmas viewing is “Encanto”, which is a brand new animated classic film, which was only released in cinemas in November for Thanksgiving and is being rushed to Disney+ for Christmas!

The film is about the Madrigals are an extraordinary family who live hidden in the mountains of Colombia in a charmed place called the Encanto. The magic of the Encanto has blessed every child in the family with a unique gift — every child except Mirabel. However, she soon may be the Madrigals last hope when she discovers that the magic surrounding the Encanto is now in danger. It features some amazing music and I know I’m going to be watching it a few times over the Christmas period.

“Encanto” is coming to Disney+ on Christmas Eve!

This all-new Disney Channel Original Movie is well worth watching, its a bit cheesy but it’s a nice easy going family film.

Barney is a socially awkward schoolboy who receives a robot named Ron — a walking, talking, digitally connected device that’s supposed to be his best friend. Barney is excited to finally have his own robot — until his new toy starts to hilariously malfunction, drawing the attention of a shady executive who wants to protect his company’s stock price at all costs. This new animated film was only recently released in cinemas and hits Disney+ on Wednesday 15th December 2021, just in time for everyone to enjoy on Disney+.

The first episode of this new series will be dropping onto Disney+ on Wednesday 29th December 2021, so perfect for when you’ve got fed up with Christmas themed content!

This brand new holiday film is available on Disney+ now. While it might not be on the same level as the original, it’s still got some great moments and younger viewers are going to love it.

“The Rescue” chronicles the against-all-odds story that transfixed the world in 2018: the daring rescue of twelve boys and their coach from deep inside a flooded cave in Northern Thailand. “The Rescue” shines a light on the high-risk world of cave diving, the astounding courage and compassion of the rescuers, and the shared humanity of the international community that united to save the boys. This documentary isn’t going to be for everyone, but if you fancy a terrifying but uplifting story, or want something a little more grownup to enjoy, please check out this fantastic documentary.

If you haven’t checked out the newest Marvel Studios series, “Hawkeye” or just need an excuse to watch it again, this series is going to be one of the most popular things to watch on Disney+ this holiday season.

The season finale is dropping onto Disney+ on Wednesday 22nd 2021.

Far From The Tree

Parenting is tough, especially when the stakes are high. On an idyllic beach in the Pacific Northwest, curiosity gets the better of a young raccoon whose frustrated parent attempts to keep them both safe. In the all-new Walt Disney Animation Studios animated short, Far From the Tree, this young raccoon will learn that while there is reason to be fearful, as danger lurks around every corner, it is still possible to live with an open heart. “Far From The Tree” is another amazing short and is a must watch over Christmas!

This all-new animated short is coming to Disney+ on Christmas Eve.

“Dopesick” examines how one company triggered the worst drug epidemic in American history. The series takes viewers to the epicenter of America’s struggle with opioid addiction, from the boardrooms of Big Pharma, to a distressed Virginia mining community, to the hallways of the DEA. Defying all the odds, heroes will emerge in an intense and thrilling ride to take down the craven corporate forces behinds this national crisis and their allies. The limited series is inspired by the New York Times bestselling book by Beth Macy

The series finale is coming to Disney+ internationally on Wednesday 22nd December 2021. This is one of the best series of the year and well worth taking some time out over the holidays to watch this series if you haven’t already done so.

If you’re looking for some classic family films to watch over Christmas, here are few more suggestions:

This Disney+ Original movie sees Kris Kringle’s daughter is full of Christmas spirit and holiday fun, but wishes she could do something “important” like her beloved brother Nick, who will take over for their father this Christmas. When Nick is about to crumble like a gingerbread cookie from all the pressure, Noelle suggests he take a break and get away…but when he doesn’t return, Noelle must find her brother and bring him back in time to save Christmas. It’s a great fun family film that new subscribers should certainly go and check out.

This is another Disney+ Original that is set at Christmas time and is a comedy about Eleanor, a young, inexperienced fairy godmother-in-training (Jillian Bell), who upon hearing that her chosen profession is facing extinction, decides to show the world that people still need fairy godmothers. Finding a mislaid letter from a 10-year-old girl in distress, Eleanor tracks her down and discovers that the girl, Mackenzie, is now a 40-year-old single mom (Isla Fisher) working at a news station in Boston. Having lost her husband several years earlier, Mackenzie has all but given up on the idea of “happily ever after,” but Eleanor is bound and determined to give Mackenzie a happiness makeover, whether she likes it or not. I really enjoyed this film, its got some funny moments in it, but more importantly, it’s just a nice family-friendly film for this time of the year.

Shifting tone a little, this one is for the grownups, “Die Hard”, tells the story of NYPD cop John McClane, who’s plan to reconcile with his estranged wife is thrown for a serious loop when, minutes after he arrives at her office, the entire building is overtaken by a group of terrorists. With little help from the LAPD, wisecracking McClane sets out to single-handedly rescue the hostages and bring the bad guys down. This is on my Christmas watchlist this year, having recently been added to Disney+ in the UK.

What are you planning on watching over Christmas on Disney+?