“Who’s afraid of the Big Bad Wolf?” The answer is everybody except Mickey Mouse in the latest short from “The Wonderful World of Mickey Mouse” entitled “The Big Good Wolf.” The Big Bad Wolf is terrorizing the town, but Mickey decides to give him the old 1-2, “a stern talking to and a hug” to try to get him to either leave town or become good. Once Mickey suggests he give the wolf lessons on how to be good, the wolf sees an opportunity to eat the entire town. It’s when the wolf tries to eat Mickey Mouse that things go awry and Mickey is able to free everyone in town from the belly of the Big Bad Wolf.

This is a nice throwback to the early Walt Disney animated shorts. The Big Bad Wolf most famously appeared in the shorts “The Three Little Pigs” and “The Big Bad Wolf.” The first is an animated retelling of the story of The Three Little Pigs, as the name suggests, while the other is an animated retelling of the story of Little Red Riding Hood. The advancements in technology in the almost 90 years since those shorts were originally released help make the Big Bad Wolf, and the other animated characters, look a lot better, but that’s to be expected. 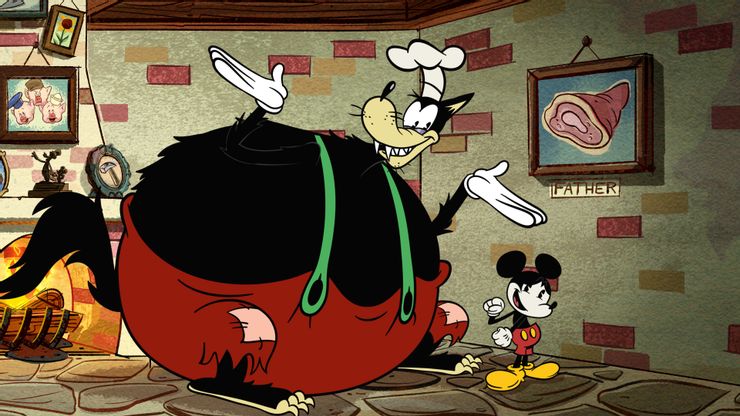 It’s great to see some of the other non-Mickey and Friends works being represented in “The Wonderful World of Mickey Mouse.” There’s a treasure trove of old shorts that the Walt Disney Company produced that have characters that can be introduced in this series of shorts. We see the Big Bad Wolf and the Three Little Pigs in this one. Maybe we can see the Pied Piper, the Grasshopper and the Ants or others in future installments of this series.

So far, I have loved every episode of this series. Each short only runs about 8 minutes in length, so it’s very easy to sit through and just have a laugh. They are very family friendly without being childish. There’s humor for the adults to appreciate as well as the children. It’s one of the best originals that’s been put on Disney+ so far and I hope this series continues for a long time.

Jeremy has been a big Disney fan since he was a kid growing up during the Disney Renaissance. One day he hopes to go to every Disney Park in the world.
View all posts
Tags: “The Wonderful World of Mickey Mouse”, disney, Disney+ Original, review, The BIg Good Wolf