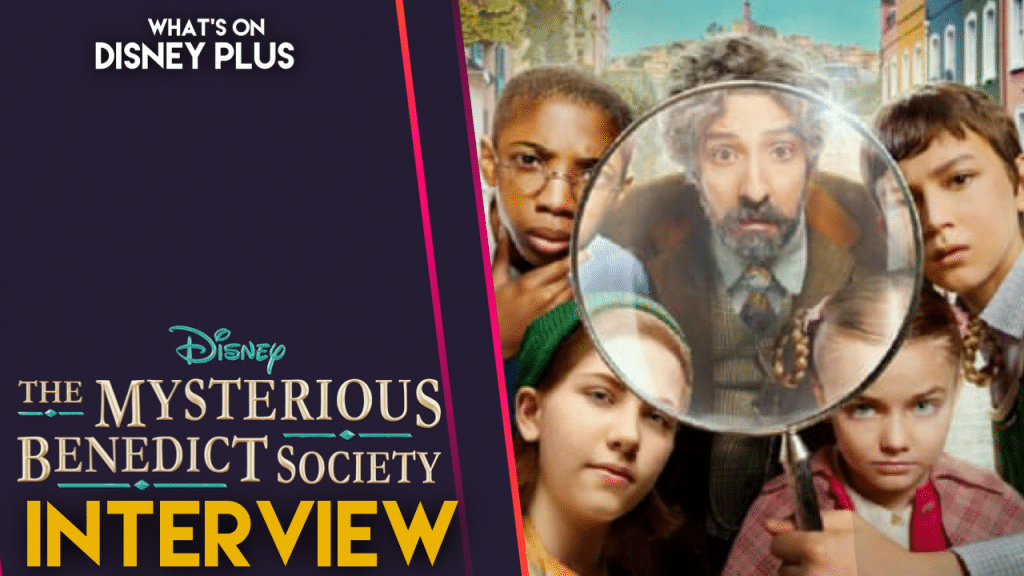 Recently, I got to speak to the writers/creators/executive producers of the second season of “The Mysterious Benedict Society”, Matt Manfredi and Phil Hay, where I asked them about creating this new season of the Disney+ Original.

In this second season season, Reynie, Sticky, Kate and Constance, the four gifted orphans who were recruited by the eccentric Mr. Benedict, embark on another mission to save the world from the nefarious plans of his twin brother Dr. L.D. Curtain. When the kids discover that Mr. Benedict and Number Two have been kidnapped, they must piece together the riddles and clues within a perilous scavenger hunt set by Mr. Benedict to foil Curtain’s latest scheme. Relying on only their wits, intellect, and empathy, the charming group of misfits embark on a globe-trotting adventure by air, land, sea and pie truck, calling upon their special skills to solve the mysteries and rescue their lost comrades. Along the way, the kids experience the growing pains that come along with being part of their new “found family,” while remaining true to their unique selves. In the process, they discover what true happiness really means.

How did you approach turning this book into a series?

Phil: We knew the second book had a lot of wonderful stuff in it that we wanted to use in terms of there is a massive sequence on the fastest ocean liner in the world, and there are some new characters who are really wonderful and delightful. And so we started with what we really loved and wanted out of the second book. We sort of had to invent because of the events of the first season, and also where we left off, we kind of came up with an overall journey that’s different than the second book, but, and sort of a thematic world that we’re exploring. But it’s sort for us a real melding of some of our new ideas and some of the most iconic and wonderful parts of that second book, The Perilous Journey.

Is there a plan to kind to create four seasons of the show, one for each book in the series?

Matt: That’s definitely kind of a template we’re working off of. Again, like Phil said, it’s as we continue to move forward with our characters in the slightly different world from the book that we’ve created, things will diverge. But like Phil said, the book provides a really nice template for what we want to do in season two, and I think it’s very similar in three and four.

What were the differences in shooting the second season to the first season?

The second season we still were using/doing a tremendous amount of precautions, but on set, we were able to interact in a sort of more, even though everyone was wearing masks, you were together more, there were more people allowed to be around. So it had more of the feel of a traditional production, which was kind of nice. And we love production, and we love to be able to be there with everyone. So yeah, it was still using all the COVID protocols, but it was a little bit closer to what we had been used to before.

What’s the difference between making a Disney+ series compared to your previous projects?

Matt: It’s interesting. The Disney Plus has been so creatively supportive that we haven’t really felt any kind of limitations. They’ve just been so supportive of what we want to do. They really get behind you. And so I haven’t really noticed kind of a market difference between doing something, doing the movies that we’ve done, or doing this. The role of a writer-producer is different in television than it is in movies. There’s a lot kind of, the buck stops with you, in that regard. And it’s great because creatively, you’re the primary force, and so that’s very satisfying.

Phil: And I think, obviously in terms of what the show is, it’s very different from almost all the work that we’ve done in the past. And we just were so drawn by the books and their wonderful spirit and we really connected to that and felt like it sort of pulled us back to a time, pulled closer to childhood and closer to some of that open expansive feeling that we could capture in the show.

Matt: Yeah, we’re still able to deal with complex themes, things that are frightening at times, but still do it in a way that kind of fits with books and Disney+.

The second season of “The Mysterious Benedict Society” is currently being released on Disney+ right now, with the first season also available to stream now.