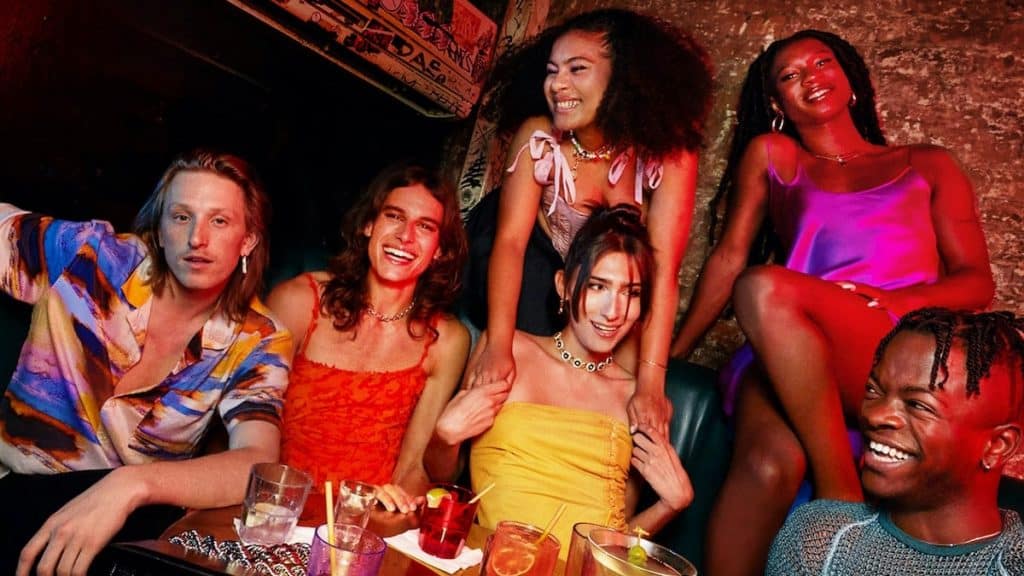 Disney’s Freeform has announced details on a new unscripted series “The Come Up” (fka “Day to Night”), which is a glimpse into the wildest feelings and vibrant moments that define coming-of-age in a post-pandemic New York. The series follows six young disruptors as they emerge from downtown New York to follow their dreams and pursue love and art on their own terms. The show follows the creative NYC underground, giving viewers an exclusive look into how the next generation of icons define themselves and how culture is created.

The cast comprises a group of ambitious, action-oriented and diverse Gen Z New Yorkers whose careers are on the rise, including Taofeek Abijako, Fernando Casablancas, Ben Hard, Claude Shwartz, Ebon Trower and Sophia Wilson. Each person is thriving in their respective fields: modeling, fashion design, photography, acting and nightlife organizing.

Here are some details on the new cast:

· Taofeek (He/Him) – At 24, he is the youngest designer to have ever shown at New York Fashion Week (NYFW) with his fashion line, Head of State. Earlier this year, he was invited to dress two celebrities, Danai Gurira and Evan Mock, at the renowned Met Gala, and his career is taking exciting turns as he is now branching out into costume design for feature films. Born and raised in Lagos, Nigeria, Taofeek immigrated to Albany, New York, at age 11 after his father, also a fashion designer, won the American visa lottery. Taking nothing for granted, Taofeek launched his first pieces out of his bedroom as a high schooler, deferred all acceptances to fashion schools, and earned a spot on the stage of NYFW and into the pages of Vogue. For Taofeek, fashion is a vehicle for supporting his community. In addition to his fashion collections, he has spearheaded several initiatives to build schools in Nigeria or support local vendors in Albany. Taofeek is on the precipice of becoming the next household name in fashion and beyond.

· Fernando (He/They) – Brazilian-born Fernando Casablancas is on the cusp of becoming the modeling world’s next international star. In less than one year of his emergence on the modeling scene, he appeared in campaigns for top brands Balmain, Charlotte Tilbury, Wales Bonner and Chrome Hearts. During the fashion week season of fall 2021, Fernando took to the catwalk for Balmain and Bottega Veneta, and most recently, he walked for cutting-edge designer Ludovic de Saint Sernin. Fernando is breaking the mold as a non-binary talent by modeling both menswear and womenswear. The world quickly took notice, and he was invited to attend the 2022 amFAR Gala in Cannes, an internationally acclaimed event to raise money for AIDS awareness and research. Beyond modeling, Fernando recently wrapped production on his first feature-length film and has been working on DJing and multimedia art projects.

· Ben (He/Him) – Coming from San Antonio, Texas, Ben is quickly making New York his home. A rising performer, he is honing his skills as an actor, comedian and dancer. The stage is where he wants to be, and New York is the place to take chances. In spring 2022, he starred in Eastine Theater’s adaptation of “Cyrano de Bergerac,” did his first stand-up comedy performance at The Broadway Comedy Club, and has acted in short films by friends. Ben can also be found behind the camera, taking street photography in New York and doing live videography and music videos for local musical artists.

· Claude (She/Her) – A Tribeca native, Claude is a true New Yorker. She is a rising actress who studied the practical aesthetics technique at David Mamet’s Atlantic Theater Company, the Meisner technique, and graduated from Tufts in 2020. Recently, Claude appeared in an off-broadway production at the Tank in February 2022, directed by Alton Alburo. A lover of fashion and a downtown fixture, Claude walked for Batsheva in NYFW Spring/Summer 2022.

· Ebon (She/Her) – A budding entertainer on her way to becoming a multihyphenate in the public eye, she is a staple in Brooklyn nightlife as a sought-after party host and fixture of the rave circuit. She most recently threw a party for Pride 2022 and is a member of Nosferatu collective, known for their show-stopping Baroque Ball in Summer 2021. For Ebon, the well-being of the Trans community is paramount. As an active and crucial organizer of queer nightlife, she has recently participated in town hall panels to discuss club safety and accountability. Beyond nightlife, Ebon’s modeling career is quickly gaining momentum as she models for the likes of Milk Makeup, Parade and Ganni.

· Sophia (She/Her) – A photography prodigy who has been behind the camera since age 13. She’s shot campaigns for major brands like Google, Nike, Peloton, Converse, Fenty, Instagram and Pepsi and established publications like Vogue, Elle, New York Magazine, i-D, Vanity Fair, The New Yorker, The New York Times, Hypebeast, Highsnobiety, Nylon and more. Sophia shoots analog only and develops and prints all photos by hand in the color darkroom, a highly technical process that imbues her images with a signature look. Continuing to chart her own path, Sophia deferred her senior year at NYU to focus full time on her artistic pursuits and career in true trailblazing Gen Z fashion. Sophia is committed to changing the face of working photographers by being front and center in rooms that young Black women traditionally have been kept from. She is also pioneering work in the NFT space, including creating the first NFT for Instagram.

In a statement, Tara Duncan, president of Freeform and Onyx Collective said:

“These six creatives emerge from downtown with a vitality and magnetism that’s infectious. They are pursuing love and art on their own terms, redefining what success means, and I am so excited for our audience to have a front row seat to it all.”

“The Come Up” is produced by Cousins. Megan Sanchez-Warner (“The Real Housewives of Orange County,” “Love and Hip Hop Hollywood”) serves as the showrunner, and Jessica Chermayeff, Ana Veselic and Anne Alexander executive produce. Chermayeff and Veselic also serve as series directors.

“The Come Up” premieres on Freeform on Tuesday, 13th September 2022 with the first four episodes airing back to back. From there, two episodes will air each week. All episodes will be available to stream on Hulu the day after they air.  It’s not been announced if this series will be released as a Star Original internationally on Disney+ and Star+.

Are you looking forward to watching “The Come Up”?

Roger has been a Disney fan since he was a kid and this interest has grown over the years. He has visited Disney Parks around the globe and has a vast collection of Disney movies and collectibles. He is the owner of What's On Disney Plus & DisKingdom. Email: Roger@WhatsOnDisneyPlus.com Twitter: Twitter.com/RogPalmerUK Facebook: Facebook.com/rogpalmeruk
View all posts
Tags: The Come Up