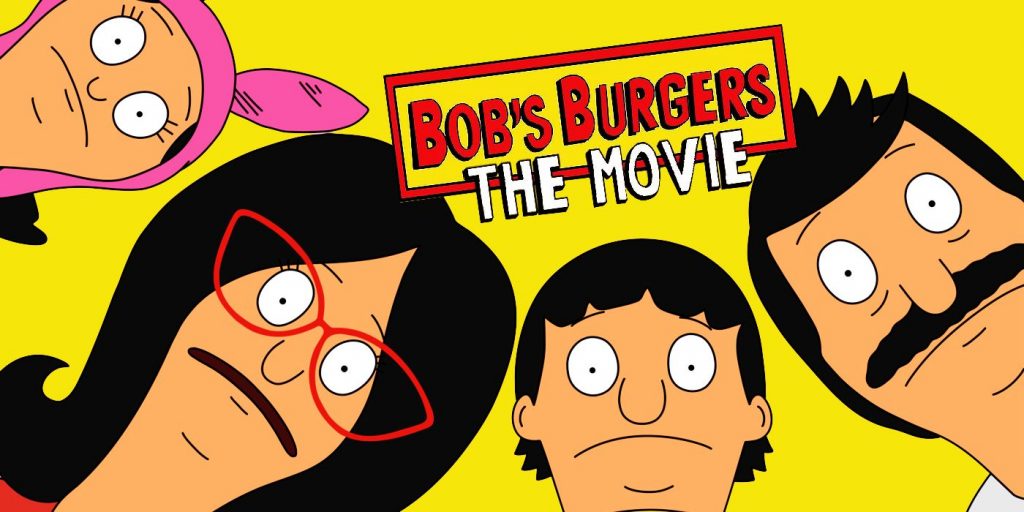 Bob’s Burgers is a television show that is beloved by many, and now it has its very own movie! In this interview The Bob’s Burgers Movie cast and filmmakers discuss bringing their show from the small screen to the big screen, when they knew they had a hit, and if non-fans can enjoy the movie too.

What Are The Belchers Up To In The Bob’s Burgers Movie?

The Belchers (Bob, Linda, Tina, Gene, and Louise) have a lot going on in this movie. Much like the series, they all have their own things to deal with.

Louise has a very heavy storyline throughout The Bob’s Burgers Movie, and Kristen Schaal who voices her, says she feels very honored that the writing team chose to focus on her character so much. “Something that I think myself and a lot of the fans have been waiting for is to see the story behind Louise’s bunny ears.” Schaal teases. She explains it is very exciting to be having this big moment for the Belchers.

Knowing that there will be a story centering around Louise, and of course her bunny ears, we have to know what the rest of the family is up to. Eugene Mirman, who voices of Gene Belcher, lets us know that in this movie, he is very excited to take his career to a new level. “He’s invented a new sound. And he is very excited to try to put on a big show. Also to enthrall the world with his innovation in music.”

As for Tina, it just wouldn’t be right if her story didn’t involve Jimmy Jr. Luckily it does, but it might not be going where fans expect it to. Dan Mintz, who voices Tina Belcher, explains her dilemma. Summer is approaching and she is trying to decide if she wants to ask Jimmy Jr. to be her summer boyfriend of not. He adds, “We all have our issues of the beginning of the film that would that we’re anxious about.”

For those who have seen the trailer, you know that Bob and Linda are having to deal with a giant sinkhole right in front of the restaurant. It is already hard enough to get customers, and this certainly won’t help. Larry Murphy, voice of Teddy, explains that when the situation happens with Bob and Linda, Teddy interjects himself to try to solve their problem and comes up with a solution. “Maybe it’s not the best solution, but he really tries its hardest.”

When Did They Know Bob’s Burgers Was A Hit?

Bob’s Burgers has been airing for 13 seasons and has grown quite a passionate fanbase. But when did the cast and filmmakers know that they had a hit on their hands? The answers vary, but the general consensus is that it took about three seasons for them to really believe it.

Kristen Schaal recalls one Halloween that she dressed as a whoopie cushion. The plan was to remain as anonymous as possible. She went out with her husband and ordered a drink at a bar. The second they heard her voice, they exclaimed “That’s Lousie!” and that’s when she knew.

Schaal also talks about a story that Creator Loren Bouchard told her once. Someone came up to him at a party and said Bob’s Burgers was a good show. When he thanked this person they replied, “No, it’s a REALLY good show.” Of course, they also have fans coming up to them and talking about their favorite lines and moments from the series. Considering that they held a panel at Comic Con before the first season even aired, and had a great turnout of excited soon-to-be fans, says a lot.

Do You Have To Have Seen The Show?

Having a show with such a large fanbase, it was important for the filmmakers to balance the references to the show, along with explanations of what viewers need to know in order to fully understand the movie. They were determined to make a movie that everyone can enjoy, regardless of if they have seen the show or not, and they think they pulled it off.

Producer Nora Smith says that their biggest challenge was trying to make the fans happy, but still deliver a movie that would be perfect fine to watch for non-fans. “We were trying to not make it just chock full inside references.” Smith explains, “We want people to come in fresh and still enjoy all the characters. And I think we did a good job.”

Loren Bouchard (Creator/Director/Writer) wants viewers to know that they do not need to have watched the series to understand the movie. “It is a family that runs a restaurant and the restaurant is in trouble. As Bernard [Derriman] (the Director) said yesterday, you’ll get it all in the first five minutes.” Bouchard adds, “We have literally made no homework for you. You are invited to come cold. You don’t need to know a thing.”

The Bob’s Burgers Movie hits theaters on May 27th — and you are invited to check it out by the filmmakers,  even if you have never seen the show.

Tessa Smith AKA Mama's Geeky, is a journalist that covers geek and Disney culture on her own website, as well as freelances for other sites such as What's On Disney Plus and Screen Rant. She graduated Magna Cum Laude with a degree in Marketing and loves all things geeky. She is a Disney Vacation Club member and a Founders Circle Member of Disney+. She is also an approved critic for Rotten Tomatoes and a member of the Critics Choice Association. Tessa lives in Upstate New York with her husband, two daughters, and two dogs named Sansa and Khaleesi.
View all posts
Tags: bob's burgers