A blue umbrella is falling in love with a red umbrella he meets on the street in “The Blue Umbrella.” In this 2013 Pixar Animation Studios short, the umbrella is living a happy life until he sees the red umbrella and must try to get to her. It leads him on a wild journey where wind, the air off of cars, rainfall and water from gutters and drains jostle him around until he has no energy to go on. That’s when he’s picked up and then finds the red umbrella covering him, protecting him.

This is a cute six minute short about love. The blue umbrella is on a hero’s journey to find the love of his life. He doesn’t realize this when he starts the day, but it becomes abundantly clear that he is in love at first sight and must track down the red umbrella. At the end of the journey, as he lies beaten and broken, it’s the red umbrella that rescues him. It’s a journey we’ve seen in many stories and one that we’ve seen several times since. But, despite being something we see often, this is still an excellent retelling of it. 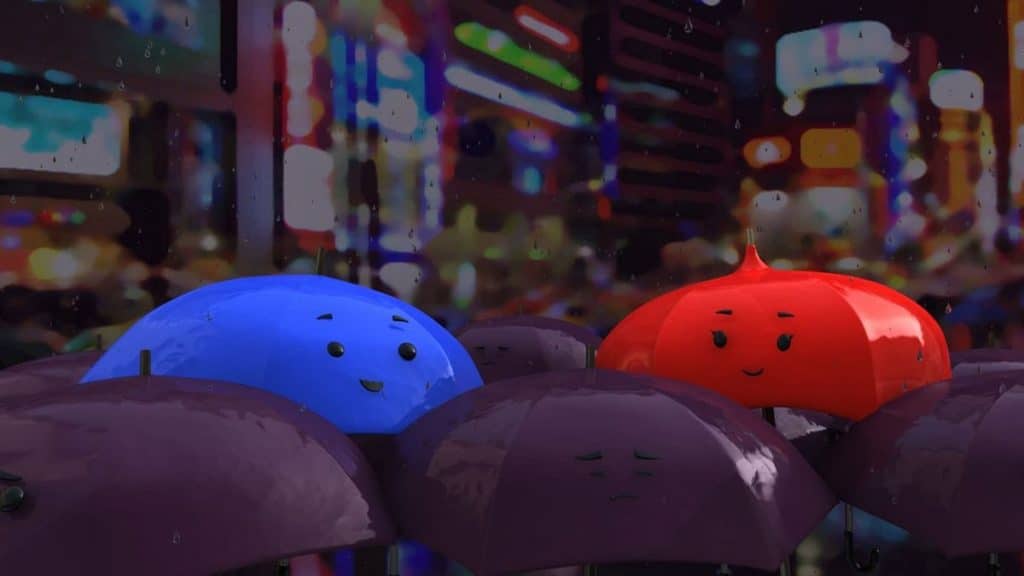 The Pixar shorts are able to do a lot with very little to no dialogue. It’s a talent that many people thoroughly enjoyed in feature length form in “WALL-E.” While that film does nothing for me, this short works well for me. I think I just prefer the lack of dialogue in shorter doses.

While this isn’t my favorite Pixar short, nor my favorite short I’ve seen on the Valentine’s Day collection, it’s still really enjoyable for me and I hope anyone else who watches it gets the same joy from it that I did. Among the Valentine’s Day shorts, I prefered both “Lava” and “Riley’s First Date.” I also liked “Mickey’s Rival” and “Delayed Date” better than this one. But, I still enjoyed this one better than the “Forky Asks a Question.” I would definitely recommend it for anyone who loves love or Pixar.

What did you think of “The Blue Umbrella?”

Jeremy has been a big Disney fan since he was a kid growing up during the Disney Renaissance. One day he hopes to go to every Disney Park in the world.
View all posts
Tags: disney, pixar, retro review, review, The Blue Umbrella