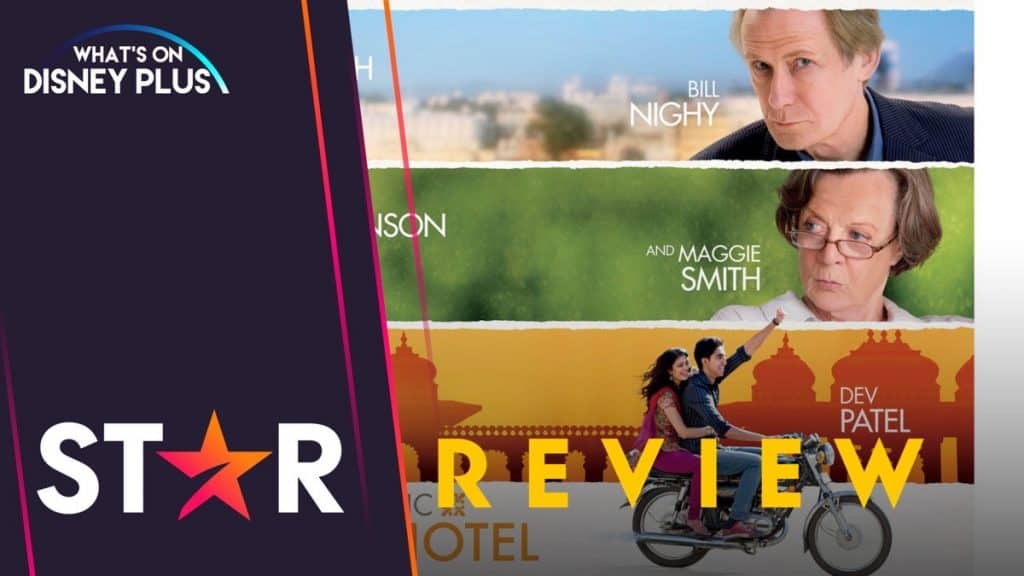 This drama comedy sees a group of unconnected retirees all make the decision (for various different reasons) to move to India in hopes of finding a better life at a new luxury retirement home. What they find is far from expected, thus leading everyone down a path of self-discovery as they adjust to their new lives in an unfamiliar land…

Despite being set in India, the Best Exotic Marigold Hotel is unapologetic British. Yes, a large part of this feeling comes from the use of top tier actors like Judi Dench, Bill Nighy and Maggie Smith. The pedigree practically leaps off the screen. And yet, it’s more than just the surface characteristics that give it such a UK flavour. The personalities of the characters themselves exude a restrained, yet emotionally busy-under-the-surface quality that is a callback to the stereotypical “stiff upper lip” mentality that may be fading rapidly in modern times but has never quite left the country’s collective psyche entirely. This imbues all of the main cast with emotional complexities that greatly enhance the overall narrative.

While this is undoubtedly an ensemble piece, Judi Dench’s Evelyn is the closest we get to a main protagonist (indeed, she serves as a narrator-via-blog-writing on several occasions) and it can be argued that her arc mirrors the story of self-reflection that everyone undertakes. Recently widowed and put under financial strain, she is seen as reliant on others by her family. So the sudden move to India is treated as ill-judged. Dench plays the role perfectly. Beginning as mousey and unsure of herself, her confidence grows naturally as she acclimatises and learns to survive as an individual. All while displaying regular twinges of grief as she still mourns for her late husband who indirectly put her in this position to begin with. It’s both mildly amusing and incredibly touching at times. Evelyn is the bedrock character that holds the narrative together.

A pair of characters that also play a crucial role in the theme of the film are Douglas (Bill Nighy) and Jean (Penelope Wilton) Ainslie. They are complete opposites as a married couple. Douglas is a laidback, friendly man while Jean is pessimistic, uptight and prone to jealousy. However, they work well as mirrors of each other. Narratively highlighting each other’s strengths and weaknesses. He keeps trying to make the best of life despite repeated obstacles getting in their way, but also struggles to stand up for himself. She is the more practical minded of the pair but she often uses this cautious attitude as reason to verbally tear down her husband’s attempts to keep moving forward regardless. Their arc is mostly self-contained between the two of them (bar a hint of a potential romance between Douglas and Evelyn) and they inadvertently force each other to grow as people even as their married life is quite obviously coming apart at the seams.

Speaking of a self-contained plot, Maggie Smith’s Muriel is an interesting case study In how to sympathetically portray a racist. And to be clear, she is xenophobic in the literal meaning of the word. From the moment that the character is introduced, it’s abundantly clear that her distrust and outwardly displayed “hatred” of Asians comes from a deep rooted fear of the unknown, rather than having a deeply held belief of superiority.

What works with Muriel’s characterisation is the fact that her change in perspective is gradual and is still presented as a work-in-progress even as the film ends. Smith portrays an easily provoked sense of insecurity that is slowly eased as she begins to not only absorb the culture but begin to get to know the locals on a personal level. And yet, that abrasiveness never quite goes away and still causes her to make some blunders towards her newly found friends. It’s a realistic portrayal of an elderly person (or a person of any age for that matter) trying their best to become open-minded to something they believed was intolerable. Those preconceptions and old habits won’t just vanish. Muriel is a flawed person merely trying to be less so, making her extremely relatable.

Next up in our ensemble cast we have Graham (portrayed by Tom Wilkinson). His initial role in this ragtag group of older travellers is as a rather calming influence due to the fact that he has lived in India before and thus knows what to do when their travel plans don’t pan out as expected. This prior knowledge of the country plays directly into his backstory, which is organically told to the audience throughout the film’s running time.

I’ll acknowledge outright that this character is what pushed me to review this movie to close out Pride Month, as he is an understated yet realistic portrayal of a gay man who understands that society has now mostly accepted his sexual orientation but still has his own social hang ups when discussing it with others. Graham is a man haunted by his closeted past who has come to a place where he previously found love to hopefully find closure. All of this internal struggle is communicated by exceptional nuanced acting by Wilkinson that should be applauded.

Rounding out my appraisal of the cast, it feels thematically appropriate to link the 4 final main actors together. We have Sonny (Dev Patel) and Sunaina (Tina Deseai). Sonny is a young wheeling and dealing Indian who hopes to impress his mother by making a success out of the titular “hotel”. He of course does so by stretching the truth about the establishment significantly. Yet for all his attempts to pull a fast one in the pursuit of success, he always has a warm, likeable personality and is never portrayed maliciously. Sunaina works at the local call centre (introduced into the story due to Evelyn needing a job). Her and Sonny are passionately in love, but struggle to gain acceptance from the latter’s mother, who doesn’t see a “modern girl” as suitable for her son. This story serves as the main conflict of the narrative.

Meanwhile, on the other end of the age spectrum we have Norman (Ronald Pickup) and Madge (Celia Imrie). While not romantically linked with one another, both are very comfortably middle aged and in similar predicaments. Madge has had several failed marriages and has now gone abroad in hopes of finding financial security with a rich husband. Norman was once a lothario with a knack for charming women but age has dulled both his skills and self-confidence. Both ache for companionship but neither know quite how or where to find it. I said that these narrative threads are thematically linked. And they are. They teach that in order to love someone else, you must first love yourself.

And in summary, perhaps that is indeed the true message of the film throughout. While Best Exotic Marigold Hotel may superficially tell the story of older people going to a different culture, making friends and starting relationships, I think that its deeper message is to be more introspective and learn to both improve and accept yourself as a person. And really, as Pride Month starts wrapping up for another year, is remembering to love yourself so you can love others anything but the perfect note to end on?

The Best Exotic Marigold Hotel is available on Disney+ in a maximum resolution of 1080p HD and standard 5.1 surround sound on compatibility devices. This is in line with the Blu Ray releases worldwide.

Once again, The Best Exotic Marigold Hotel does not include an “Extras” tab on its page. Therefore, not even a standard trailer or “promo clip” is available.

“The Best Exotic Marigold Hotel” is available to stream on Disney+ now in many countries including the UK and Ireland, Canada, Australia and New Zealand, the Netherlands, Spain and more.

What are your thoughts on “The Best Exotic Marigold Hotel”?

Jon has been a Disney fan all of his life. From wearing out those expensive VHS tapes and visiting Disneyland Paris as a child to becoming a huge fan of the MCU in adulthood, Disney has helped shape some of the happiest, most fun moments he can remember.
View all posts
Tags: best exotic marigold hotel, Reviews, star