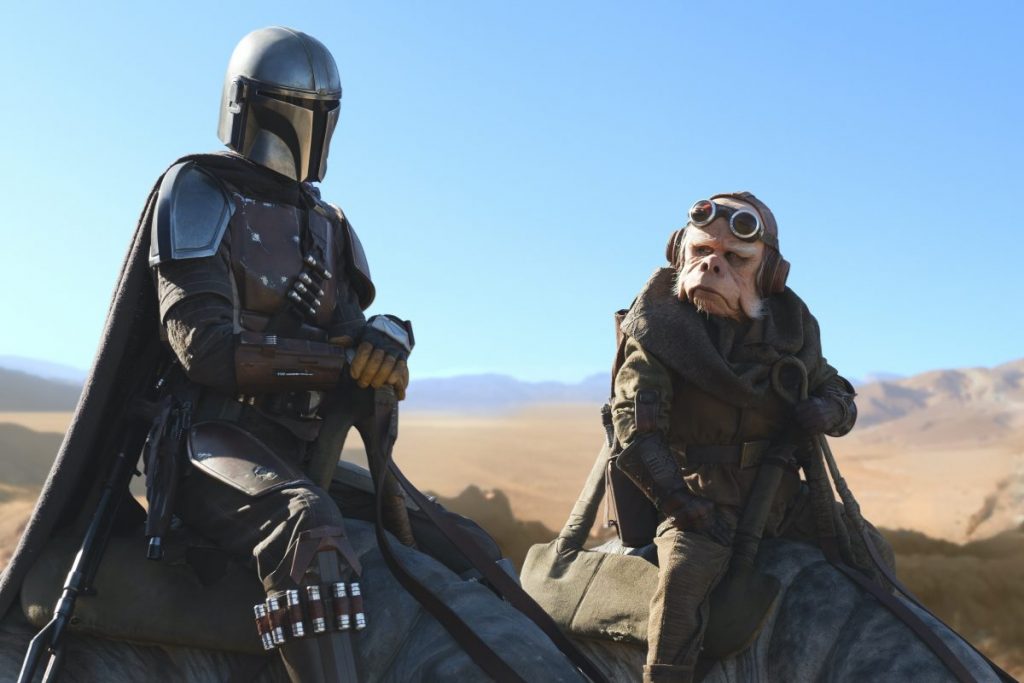 Just days after Disney+ launches, the second episode of the biggest show on the new streaming platform, The Mandalorian, hits the app.

The story continues from right after the events of the last episode, with The Mandalorian taking his bounty back to his ship, only to discover the local Jawa’s have stolen from him.  This leads to a chase across the desert, before ending in a huge epic battle.

Once again, the action scenes take center stage and I’m completely blown away with the quality of the show.  It feels like a full budget Star Wars film, it has the perfect mix of real live action props and locations, but with a little added magic.  Though there was a moment in the epic battle, where it looked more like a scene from “Fantastic Beasts and Where To Find Them”, which looked a little more ropey.

I couldn’t help but chuckle every time I saw “The Child”, this character is so loveable and is going to be everywhere, it’s certainly much cuter than a Porg or Ewok.

One other aspect of the show I’m enjoying is the humor, as there were a few times I chuckled at the events taking place.  Which wasn’t something I was expecting from this series, but completely fits the tone of the show.

This episode felt much more a part of the larger Star Wars universe, which I put down to the inclusion of the Jawa’s and the Sandcrawler, it took me back to “A New Hope” and that felt good.  I wouldn’t be surprised if the desert planet turns out to be Tatoonie, which I kinda hope it does.

My only real issue with this episode was the length, since its not even half an hour long, so removing the catch up, intro and end credits, it can’t be more than 22+ minutes long.  A completely enjoyable 22 minutes I might add and the reason I’m complaining is because I’m loving the whole vibe this series is giving off and I just want more. But we are going to have to wait another week for another installment.

Chapter 2 was another fantastic episode and the Mandalorian is shaping up to be an impressive part of the Star Wars library and I can’t wait to rewatch the entire series in January, once the final episode is released after Christmas, since the first two have got me hooked.

Roger has been a Disney fan since he was a kid and this interest has grown over the years. He has visited Disney Parks around the globe and has a vast collection of Disney movies and collectibles. He is the owner of What's On Disney Plus & DisKingdom. Email: Roger@WhatsOnDisneyPlus.com Twitter: Twitter.com/RogPalmerUK Facebook: Facebook.com/rogpalmeruk
View all posts
Tags: review, the mandalorian