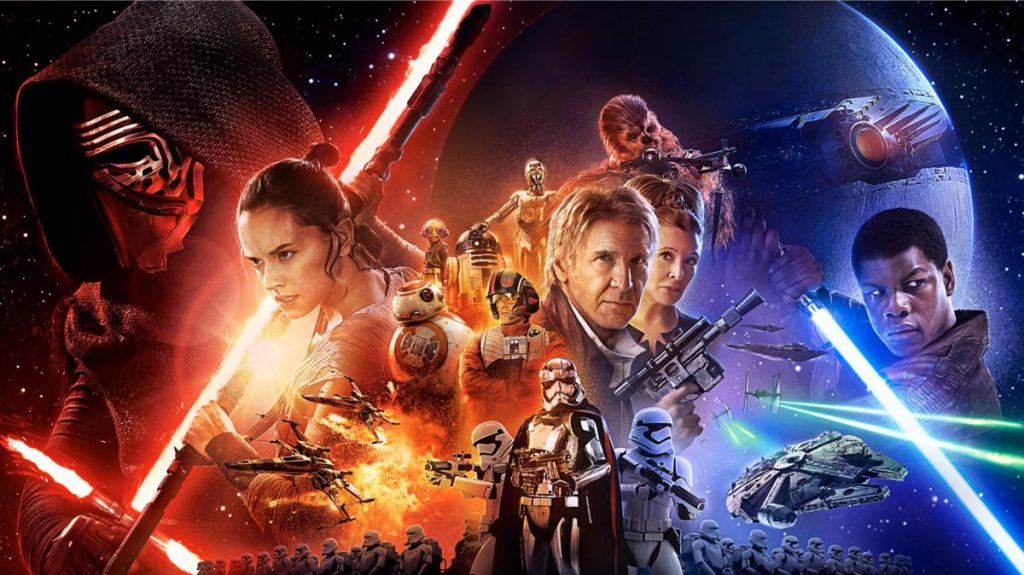 A new generation of Star Wars fans is introduced to the saga as Disney unveils its first film since buying the series. “The Force Awakens” brings back fan favorites Han Solo, Chewbacca, Leia Organa and C-3PO to interact with a new trio of heroes and a new villain taking his lead from the ways of Darth Vader.

Released in 2015, “The Force Awakens” bears a striking resemblance to the “A New Hope” and “Return of the Jedi.” It features an evil group with storm troopers, military insignia and a leader dressed in all black wearing a helmet and mask; a ragtag group of rebels led by Leia Organa, now known as General Leia; a smuggler mostly out for himself helping the cause; a young adult, who wouldn’t normally be noticed, sucked into a massive battle and somehow becoming the hero and beginning training as a Jedi; and a weapon with the strength to destroy a planet. In reality, it’s a remake of “A New Hope” with elements of “Return of the Jedi” sprinkled in. That makes the film unoriginal, but not unenjoyable.

There are some slight differences of course. Rey is already an orphan by the time we meet her. Poe Dameron is a pilot with the Resistance led by General Leia and Fin is a former stormtrooper breaking away from the First Order. The main trio have different characteristics than the original trio. Plus, Han Solo and Leia Organa already know the Big Bad of the movie is their son, unlike the original trilogy where Luke and Leia didn’t know Darth Vader was their father until the second and third movie respectively and didn’t find out they were siblings until the third movie.

I remember watching this film in theaters and my expectations were low. I was excited to see a new “Star Wars” film, but after having sat through the prequels, I knew not to get my hopes up. Maybe that’s why I enjoyed it so much then. I recognize the flaws, but I had fun sitting there watching the film. I had fun when I watched it again for this review. It’s not a spectacular film, by any stretch, but I always enjoy myself when watching it.

One of the worst parts of the prequel trilogy was the dialogue, something that has always been viewed as a weakness for George Lucas. The dialogue in this film is more natural and just plain better than anything you’ll get in the prequel trilogy. Time has made the special effects more enjoyable. And while anyone could see Kylo Ren killing Han Solo coming from a mile away, it was still a development that drove the plot forward. This film has taken a beating in recent years because of the sequels that followed it, but I maintain this is a fun and enjoyable film.

What did you think about “Star Wars: The Force Awakens?”

Jeremy has been a big Disney fan since he was a kid growing up during the Disney Renaissance. One day he hopes to go to every Disney Park in the world.
View all posts
Tags: disney, retro review, review, star wars, The Force Awakens