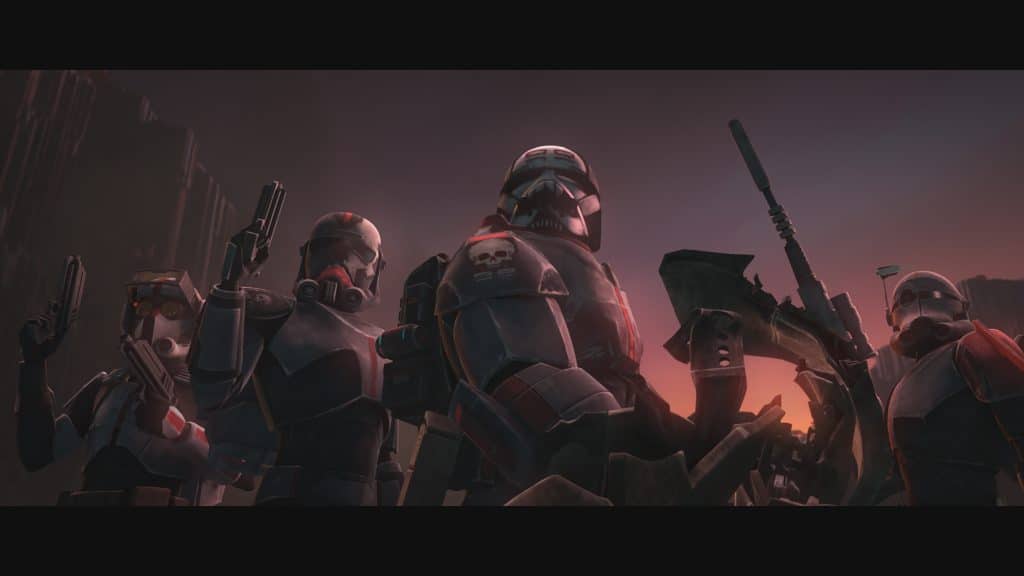 The animated smash hit series, Star Wars: The Clone Wars, returns to Disney+ with its seventh and final season, which explores the events leading up to Star Wars: Revenge of the Sith.

In the first episode of this new season, we get to meet a new squadron of Clone Troopers, that have been nicknamed “The Bad Batch”, who are an eclectic bunch of characters, all with a unique skill set, since something went wrong in their cloning process, however this change makes them highly effective.

The main story of this episode focuses on Captain Rex teaming up with “The Bad Batch”, to find out more details on how the Seperatist droids keep beating the Clones in battle and seemingly keep using tactics that he created with the now deceased clone trooper, Echo.

This episode is action packed, with lots of huge shootouts scenes between the Clone Troopers and Seperatist Droids, which is one of the major advantages to this series. Since this series was really able to showcase with much more detail, the actual Clone Wars, from a more grounded approach, than we saw in the prequel trilogy. Especially with this story arc, which results in characters such as Mace Windu and Anakin Skywalker, barely getting a few seconds on the screen, since it’s so focused on the “Clones”.

I felt this episode did a great job in setting up the “Bad Batch” crew and getting a general premise of what this story arc is going to be, which will take up around a third of this final season. And that’s again, the beauty of the Clone Wars series, they’ve got time to explore stories in much more depth. I’m certainly looking forward to the next few weeks, as we find out more. Which is exactly what you want from a Star Wars series.

While the Clone Wars doesn’t have the same mainstream impact that the live action, Mandalorian, series has, this series shouldn’t be slept on by Star Wars fans. If you’ve never watched the Clone Wars, all previous seasons are available on Disney+, along with another animated series, Rebels, that should keep you entertained until the second season arrives in the Fall and get your prepared for many references that have been introduced from the Clone Wars series.

The artwork in this series is a massive improvement over previous seasons and you can tell the team have put as much effort as possible into making the show go out with a bang.

This first episode is extremely entertaining and brings you right back into the swing of the series, but if you’ve never watched some of the previous episodes, it might seem underwhelming, since the main plot won’t have the same impact. So I would recommend at least watching some of the key episodes of the show before jumping in at season 7. (Click here for a list of the episodes needed to catch up).

Roger has been a Disney fan since he was a kid and this interest has grown over the years. He has visited Disney Parks around the globe and has a vast collection of Disney movies and collectibles. He is the owner of What's On Disney Plus & DisKingdom. Email: Roger@WhatsOnDisneyPlus.com Twitter: Twitter.com/RogPalmerUK Facebook: Facebook.com/rogpalmeruk
View all posts
Tags: clone wars, review, star wars