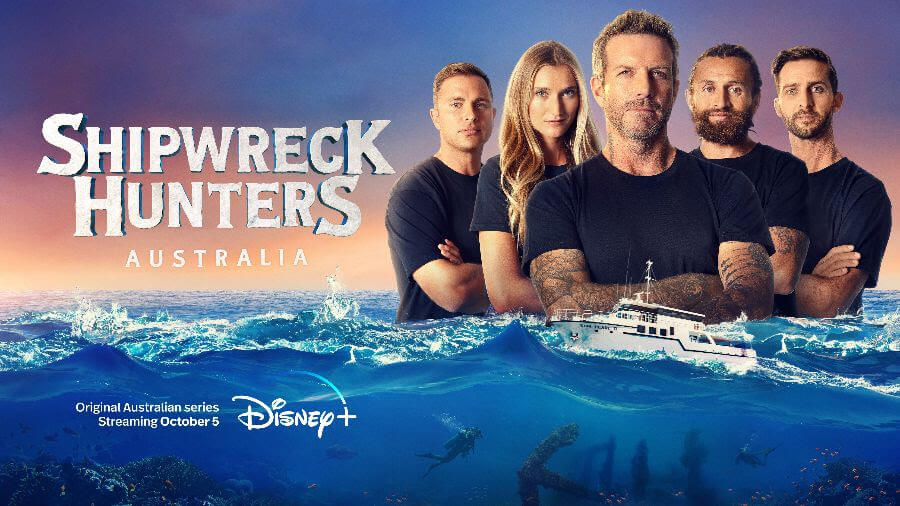 Disney has announced that the new Australian Disney+ Original series, “Shipwreck Hunters Australia” will premiere on the platform in Australia and New Zealand on 5th October 2022.

“Shipwreck Hunters Australia” follows a fearless team of ocean adventurers as they deep dive to find – and bring to life – some of the world’s most epic shipwreck stories.

In this premium six-part documentary series, the group of highly-skilled divers and underwater filmmakers made up of Captain Ash Sutton, Andre Rerekura, Nush Freedman, Johnny Debnam and Ryan Chatfield – along with expert maritime archaeologists from the Western Australian Museum, Dr Ross Anderson and Dr Deb Shefi, explore Australia’s ‘Treasure Coast’ – believed to be the home of over 1,600 shipwrecks – to help unearth the mysteries that lie beneath ocean depths.

With the beauty of Western Australia truly shining as its backdrop, “Shipwreck Hunters Australia”, takes viewers on an epic expedition from the comfort of their living rooms. Join the teams as they set out to uncover long-lost shipwrecks and in turn hoping to make history with world-first discoveries.

Featuring new evidence, archival research, specialist diving, and a generous dose of adrenaline-fuelled adventure “Shipwreck Hunters Australia” is a vibrant journey into the mysterious past led by a crew of modern day ocean explorers – whose discoveries will truly have viewers hooked.

“Shipwreck Hunters Australia” is a co-production between VAM Media and Terra Australis Productions in association with Barking Mad Productions for Disney+.
The series is directed and produced by VAM Media’s Brendan Hutchens (Testing Teachers, Walking Man, Drawn To Water), together with series producer Katherine Barrett(Aussie Gold Hunters, Outback Truckers) and executive producer Steve Bibb (Inside the Sydney Opera House and Matildas: The World at our Feet).

“Bringing these stories to life with Disney+ is just the perfect partnership. Epic ocean expeditions, amazing shipwreck tales and a superhero team of shipwreck hunters makes for a truly one of a kind series. I am just so stoked to be able to share the adventure, and the team’s discoveries, with the world.”

“The ocean is a wild and unpredictable place, there are so many secrets hidden beneath the waves. Stories that keep me from sleeping at night and feed my passion. Looking for shipwrecks is the ultimate buzz for me. Firstly you have to use all your knowledge, research and skills to try to find them, and then, try and dive them! There is no stopping me and the team from trying. There is nothing better.”

Executive Producer Steve Bibb added: “When I first met the team and saw their passion for all things deep sea mystery, I just knew the world had to see them in action. We’re excited to be able to show viewers what the team discovered, which I’m sure will make headlines around the world.”

All six episodes premiere on 5th October on Disney+ in Australia and New Zealand.  No international release date has yet been announced.