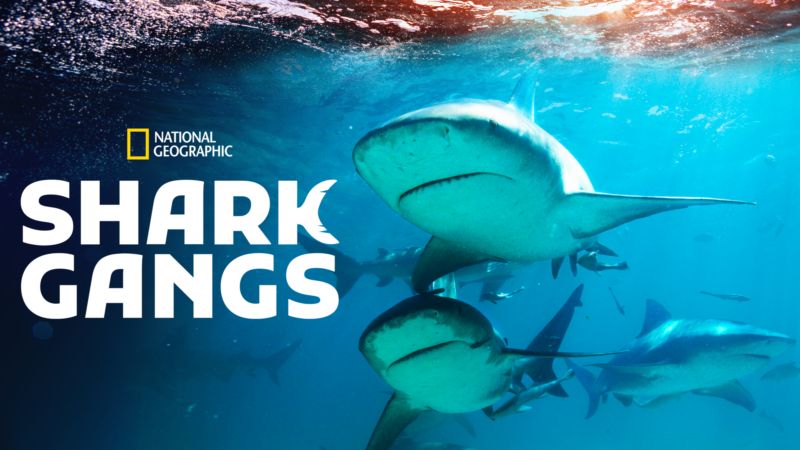 Sharks seems to be gathering in groups to travel and hunt in the latest National Geographic documentary, “Shark Gangs.” This film takes a look at these growing groups of sharks and how they behave. Marine biologists and shark researchers dive deeper into the types of sharks in gangs and if they are by design or coincidental. The documentary also investigates if the gangs of sharks could present a problem to humans in the future.

If you love sharks and shark documentaries, then this a great one to watch. Sharks have usually been thought of as lone predators, but researchers are noticing larger and larger groups of sharks in all the Earth’s oceans. It appears some of the sharks, like Great Whites and Hammerheads, are ganging up for hunts while others, like Bull Sharks, end up in groups by accident because they individually all hear the same sounds leading them to food. It’s very educational and can help those that love the water know what to look out for if they plan on swimming in the ocean so they don’t end up in an area with a gang of sharks; especially during feeding time. But, at the end of the day, what is causing these sharks to start traveling in gangs? Is it for protection? Does it make it easier to hunt? In the list of 5 “W” questions, the why is the most important one here. We know what, where and how. There is no who. The only questions that need to be answered are when and why. There seems to be a greater concentration of shark gangs leading to feeding frenzies. I wonder if the Great Whites and the Hammerheads started in the same way the Bull Sharks are currently behaving; a bunch of individual sharks working towards the same area. Maybe they did that and noticed it was more efficient for hunting and started traveling in gangs. That’s complete speculation on my part, but this documentary certainly made me question what I had known about sharks to this point.

I love shark documentaries. Shark week and shark fest are some of my favorite times of the year. This is one of the best ones out there. I, previously, reviewed “Shark Beach with Chris Hemsworth” and really enjoyed it due to its acknowledgement of conservation to help the shark and human peacefully coexist. I like this one even more, because I’ve always been interested in the travelling and feeding habits of sharks. I certainly recommend this for anyone looking to learn more about sharks.

What did you think of “Shark Gangs?”

Jeremy has been a big Disney fan since he was a kid growing up during the Disney Renaissance. One day he hopes to go to every Disney Park in the world.
View all posts
Tags: disney, documentary, national geographic, review, Shark Gangs, Sharks