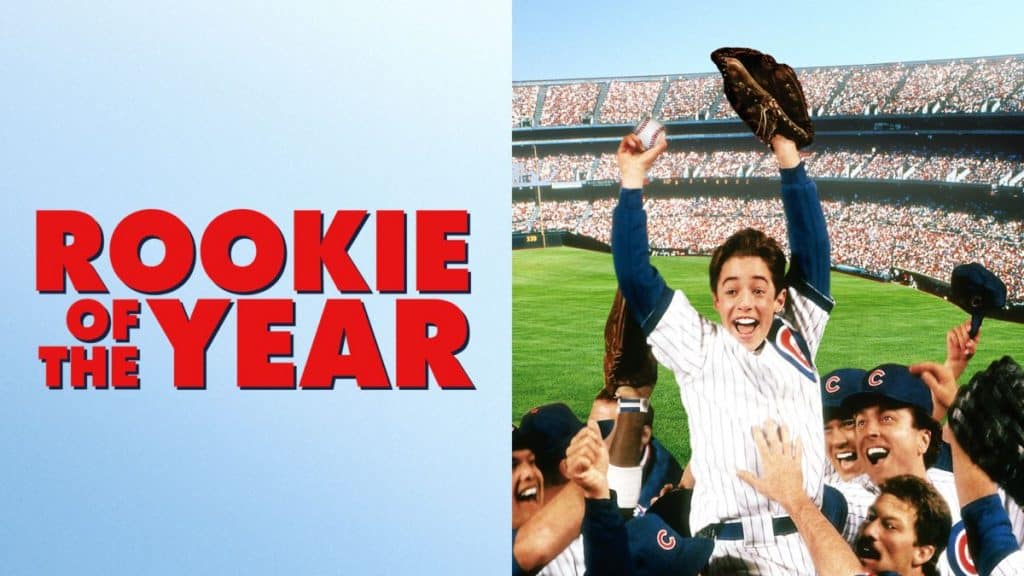 After his broken arm heals and the tendons heal too tight, 10-year-old Henry Rowengartner can throw a ball harder than most Major League Baseball pitchers; leading to his hometown Chicago Cubs to recruit him to help save their floundering season in “Rookie of the Year.” He becomes an ace pitcher, gets to meet his idol; pitcher Chet “Rocket” Steadman; and helps lead the team to the division title. But, his arm eventually returns to normal and he has to be a normal kid again.

I have full-on nostalgia goggles when I watch this film. It came out when I was 8-years-old and I, absolutely, loved it. Watching it again, it doesn’t hold up to my memory, but I still go back to being a kid who loved baseball and just enjoy myself while watching this film. The premise is kind of dumb. Plus, you find out at the end the Cubs won the World Series when he was on the team, even though you don’t see it play out that far. This was 23 years before 2016 and that was just crazy talk. In 1993, the Cubs winning the World Series was far more unbelievable than a 10-year-old pitching in the big leagues. It’s a great kid’s film that an adult seeing for the first time will not enjoy, but it’s a fun memory of childhood. A lot of this movie is predictable. You find out, despite Henry’s mother telling him for years that his father was an excellent pitcher, it was actually her; Henry’s mother’s boyfriend tries to take advantage of his gift while he still wants to be a 10-year-old leading to his mother dumping him; Henry’s idol is not thrilled with a 10-year-old taking over as a better pitcher than he is, but ends up developing a father-son like bond with Henry; and the Cubs win before Henry loses his arm and becomes a regular kid again. He plays little league instead of the major leagues and is coached by his mother and Chet Steadman after Steadman retired from the big leagues.

It’s exactly what 8-year-old me wanted to see in a movie and something I wouldn’t bother my time on as an adult. It’s another of the mildly entertaining kids’ sports movies that we saw a lot of in the early 90s. It’s in the same vein as “The Sandlot,” “The Mighty Ducks,” and “The Big Green.” And, it’s far better than “The Big Green.” I had fun reliving my youth. I had fun seeing Daniel Stern play another crazy character, similar to Marv in “Home Alone.” I had fun seeing professional baseball players like Barry Bonds, Bobby Bonilla and Pedro Guerrero. I still have fun, but I recognize it’s only an okay movie.

What did you think of “Rookie of the Year?”

Jeremy has been a big Disney fan since he was a kid growing up during the Disney Renaissance. One day he hopes to go to every Disney Park in the world.
View all posts
Tags: Baseball, disney, review, Rookie of the Year