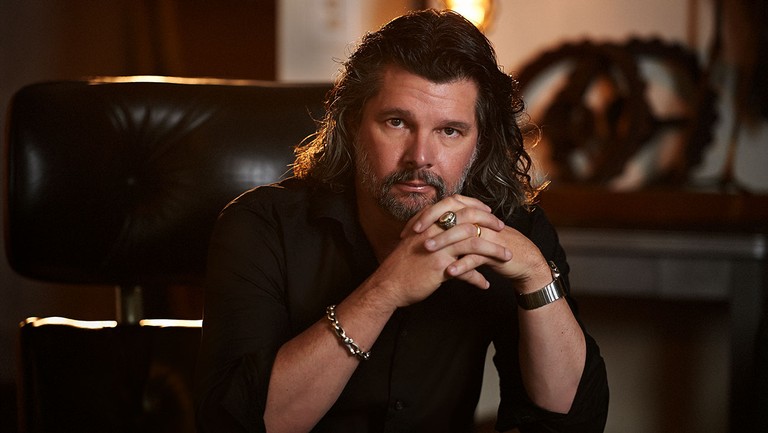 Disney’s 20th Television has signed a new multi-year overall deal with Ron Moore, who has been an executive producer for Sony Pictures Television on a number of shows including Syfy’s “Battlestar Galactica”, Starz “Outlander” and Apple TV+ “For All Mankind”.

He quietly signed last summer and it’s estimated to be worth in the eight-figure range.   His collaborators at Tall Ship, Maril Davis and Ben McGinnis have also moved over to Disney.

The first project that Ron Moore is working on is the Disney+ series “Swiss Family Robinson”, which was announced during December’s Investor Day event.  He will be working alongside Jon M. Chu (Crazy Rich Asians) on the series.

“Ron’s as passionate about Disney parks, characters and IP as our head of drama Michelle Mendelovitz was about bringing him to the studio, and when he said ‘yes’ we were all thrilled beyond belief.  His beautiful work on Battlestar Galactica, Outlander and For All Mankind are well known for their artistry and intelligence, their unforgettable characters and big, broad appeal. And it’s been so exciting for Karey, Michelle and me to see how inspired he is by the Disney canon. Swiss Family Robinson is just the first project he has up his sleeve and we’re so glad he’s made 20th his creative home.”

Ron Moore has previously worked on a number of sci-fi shows including “Star Trek: The Next Generation”, “Star Trek: Deep Space Nine”, “Carnivale” and also wrote a Star Wars live-action series for ABC and George Lucas in 2013 that never happened.

Ron Moore said in a statement:

“I’d like to thank [Disney’s] Dana Walden, Carolyn Cassidy and Michelle Mendelovitz, and now Karey Burke, for inviting me to join their amazing team at 20th Television and Disney.  I grew up loving Disney movies, TV shows, and theme parks, and I still do to this day, so the chance to work on some of those same classic titles like Swiss Family Robinson was an opportunity I just couldn’t pass up. I had an amazing experience at Sony Pictures Television and I’d like to thank everyone at Sony for their steadfast support and personal friendship over the last decade. I’m also very happy that I’ll be able to continue my involvement with both Outlander and For All Mankind while Matt Roberts and Matt Wolpert and Ben Nedivi take over the showrunning duties on each project respectively.”

Roger has been a Disney fan since he was a kid and this interest has grown over the years. He has visited Disney Parks around the globe and has a vast collection of Disney movies and collectibles. He is the owner of What's On Disney Plus & DisKingdom. Email: Roger@WhatsOnDisneyPlus.com Twitter: Twitter.com/RogPalmerUK Facebook: Facebook.com/rogpalmeruk
View all posts
Tags: deal