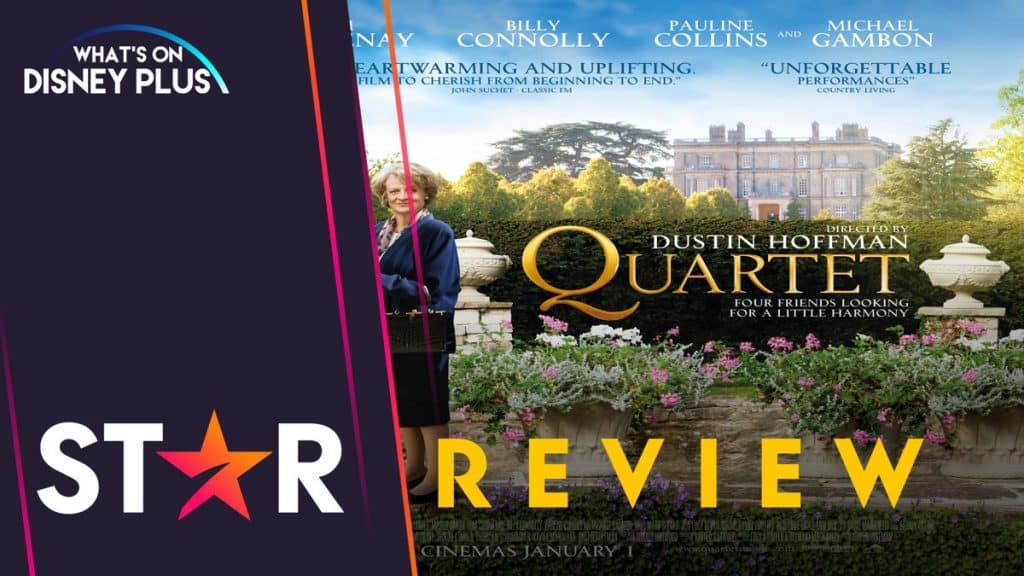 Quartet is a cosy, mildly comedic drama that focuses on the residents of a retirement home with struggling finances for professional musicians. Reg (Tom Courtenay), Wilf (Billy Connolly) and Cissy (Pauline Collins) plan to raise funds with a performance at the annual concert for classic musician Verdi’s birthday. However, they lack the star power to sell enough tickets. The arrival of Jean looks to be the exact bit of luck they need but her past with Reg may just scupper all of their plans…

Quartet is another film that has come to Disney+ in the UK as part of the ongoing effort to meet a European content quota for all non-European streaming services that is dictated by law. It is not currently available elsewhere on Disney+, as of writing. However, if my U.S. readers are keen to watch, it can be currently found for free (with ads) on Tubi.

It’s rare nowadays that a film makes me feel so cosy while watching it. There’s something about this quaint British film that makes you settle down and happily absorb it. There’s very little actual tension and while there is some form of stakes for our main protagonists to succeed, there’s no immediate deadline or moustache twirling villain threatening to close down their home. In fact, there’s no antagonist at all. This is a film that breathes, lives and dies on the interactions and chemistry of its main cast. Thankfully, with such a stellar, legitimately iconic cast to fall back on, this film shines.

Technically, this film has an ensemble cast, with all 4 of its main stars receiving equal billing. But with that said, Billy Connolly’s Wilf could be argued as the catalyst for the plot even moving forward. He’s the one most aware of the financial state of the home and he pushes the idea of a quartet performance most strongly. It also helps that he is consistently the most entertaining character throughout. This should come as no surprise, of course, what with Billy being widely regarded as one of the best comedians of all time. And yes, the wittiness does have a lot to do with the strength of his performance. And yet, there’s a little bit more to it than that. Wilf is a relentlessly charming old flirt with a comical lack of verbal filter. However, there are layers to the portrayal of the character that allude to an almost melancholic loneliness at the core of the man, making him even more endearing in the process.

While Wilf plays a major part in moving the overarching plot of the quartet performance forward, it is Smith’s Jean and Courtenay’s Reg that are undoubtedly the emotional of this picture. The core that makes it truly worth watching in the first place. Both actors are magnificent as former lovers who parted on bad terms but never quite moved on from each other, regardless of who else they loved. Reg in particular has a perfect balance of initial coldness towards his former lover, followed by a slowly increasing sorrow that presents itself in flashes of anger as he gradually opens up. For her part, Smith perfectly depicts a woman plagued by her mistakes and racked with guilt. A woman who seeks forgiveness but hasn’t quite convinced herself that she deserves it. The two bounce off of each other perfectly, naturally switching between fond remarks and cutting retorts as they both struggle to navigate the minefield of their previously bottled up emotions. It had me engrossed without feeling the need to be melodramatic.

Collins’ Cissy is undoubtedly the saddest character of this main quartet. While her specific condition is never stated, she is quite obviously suffering from some form of cognitive decline. She is friendly and bubbly but also easily confused and prone to just wandering off into her own little world. On a couple of occasions, she appears to suffer breaks from reality entirely. Cissy doesn’t really have much of her own arc in the narrative. Instead, she seems to serve as a mirror for the other aging musicians to reflect upon. A reminder to enjoy their gifts for their own sake while they still can. One of the key questions throughout the film is whether we should be concerned with maintaining a legacy or “pristine image” of ourselves. While not outright stated as such, Cissy almost serves as a potential answer to that question. Why worry about our legacy when it’s all too easy to lose who we are ourselves? In that sense, Cissy is integral to the more philosophical quandaries that the narrative poses.

Before I move on from the acting, Sheridan Smith deserves an honourable mention as the main authority figure for the retirement home. Her part is limited but she gets to share a couple of fun scenes with Billy where she definitely holds her own with his witty banter and is a supportive influence without needing to ever take the spotlight.

In regards to the music, as you probably expected, it features a significant amount of the classical and operatic varieties. In truth, it’s fine, but doesn’t really stand out. In hindsight, perhaps that’s fitting because while the story focuses on a group working towards a performance, the performance itself means very little compared to the character growth in the process.

In summary, Quartet is a laidback drama with some fun moments of comedy that takes its time to explore the characters it presents to the viewer. If you’re only interested in stories full of melodrama, this isn’t for you. There is a lot of dialogue between actors at the very peaks of their craft. It won’t excite you but it could definitely charm you if given the chance.

Quartet is available on Disney+ in a maximum resolution of 1080p HD and standard 5.1 surround sound on compatibility devices. This is in line with the Blu Ray releases worldwide.

Once again, Quartet does not include an “Extras” tab on its page. Therefore, not even a standard trailer or “promo clip” is available.

“Quartet” is currently only available to stream on Disney+ in the UK and Ireland, although readers in the U.S can currently watch the film for free (with ads) on Tubi.

What are your thoughts on “Quartet”?

Jon has been a Disney fan all of his life. From wearing out those expensive VHS tapes and visiting Disneyland Paris as a child to becoming a huge fan of the MCU in adulthood, Disney has helped shape some of the happiest, most fun moments he can remember.
View all posts
Tags: Quartet, Reviews, star