Scooter needs some help staying awake while loading this week’s “Muppets Now” clips, so he enlists the help of Animal before he goes into sleep mode. Meanwhile, we get two Miss Piggy segments; again featuring Taye Diggs and Linda Cardelini; another Swedish Chef segment and another science experiment from Bunsen and Beeker.

Sleep Mode is an appropriate title for this episode because it’s my least favorite of the series so far. This episode could be described as a snoozefest. While I understand going back to the same segments during the first season because they have worked before, there’s becoming too much of a reliance on Miss Piggy. She hosts the celebrity interview segment this time. In the first episode, Kermit hosted the segment and it was hysterical. This time, it was just too much Miss Piggy. I was bored throughout. Aubrey Plaza is one of the most genuinely enjoyable celebrities in interview segments and even she couldn’t carry this one. Then later, we get the “Lifestyle” segment which is usually funny but didn’t do anything for me. Taye Diggs and Linda Cardelini have been great in these segments; and it was great seeing Pepe the King Prawn with Linda Cardelini, but I was so tired of Miss Piggy’s presence in this episode, I couldn’t enjoy it. The lesson here is more Kermit, less Piggy. 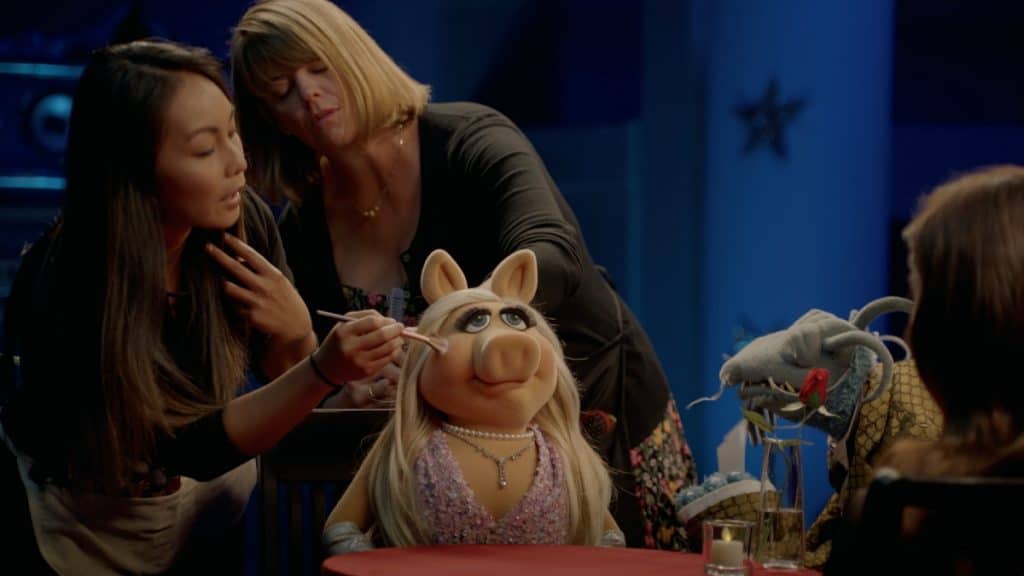 While the Swedish Chef and Bunsen and Beeker segments were not as good as previous renditions, they were still genuinely enjoyable. Yes, they can be repetitive, but we get so little of these characters in other segments and they make their limited time count even in repetition. While I wouldn’t want too many of the side Muppet characters having their own segments, maybe work them in with these segments. Seeing Walter or Beauregard with the Swedish Chef or Bunsen and Beeker would keep them in people’s minds without relying on them to carry a segment, which I, admittedly, don’t think they could do.

It was great to see Animal and other members of the Electric Mayhem in segments helping to keep Scooter awake. We’ve seen Janice in the “Lifestyle” segment previously, but I don’t think we’ve seen Dr. Teeth or any of the other members of the Electric Mayhem until this episode. They could be used a musical segment of some kind, especially if they can work in a musician as a celebrity guest. We’ve seen some good celebrity guests, like Aubrey Plaza and Danny Trejo, but an actual musician could be a great way to work in other Muppets and to expand the possible segments.

What did you thik of this week’s episode of “Muppets Now?”

Jeremy has been a big Disney fan since he was a kid growing up during the Disney Renaissance. One day he hopes to go to every Disney Park in the world.
View all posts
Tags: disney, Disney+ Original, muppets now, review