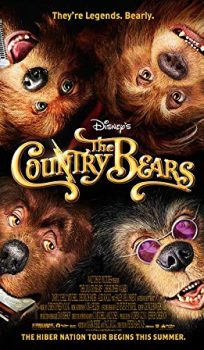 Based on an attraction at Disneyland, the Country Bear Jamboree, “The Country Bears” (2002) is one in a long line of live action Disney family films. The movie is a satire of Behind the Music rock & roll bands. Beary, a young bear raised by a human family in a world where humans and talking bears coexist, attempts to trace his roots. He meets up with the Country Bears, a long-since broken-up band, a parody of bands like the Eagles. Beary helps the Country Bears reunite for one final concert, while searching for who he truly is.