At last month’s Investor Day event, Disney officially announced they are making a live-action remake of their classic animated film, “Pinocchio”, which will star Tom Hanks as Geppetto.  The new film will be coming exclusively to Disney+.

According to Deadline, actor Luke Evans is set to return to Disney to play another classic villain, where he will be playing the Coachman.  He previously starred as Gaston in the live-action “Beauty and the Beast”, which he will be returning to play in the prequel limited-series for Disney+.   Luke Evans has also starred in the “Hobbit” trilogy, along with many of the “Fast & Furious” films and can be currently seen in the ITV crime series “The Pembrokeshire Murders”.

In the original animated 1940 film, the Coachman is a sinister and shadowy figure who is notorious for luring “stupid little boys” to Pleasure Island, where they are transformed into donkeys and sold on the black market.

Luke Evans confirmed the casting on his social media. 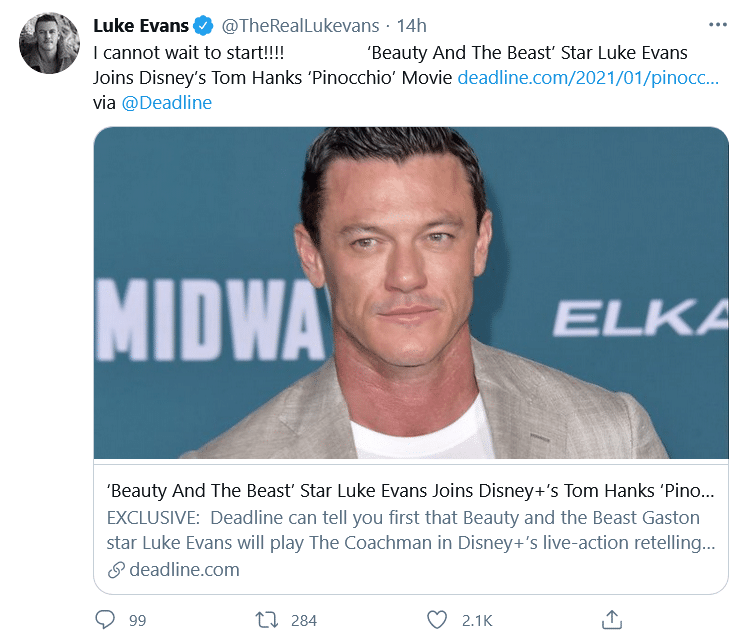 The new Disney+ Original movie will be directed by Robert Zemeckis and produced by Chris Weitz and Andrew Miano.

The original animated “Pinocchio” film is available to watch now on Disney+.

Are you looking forward to seeing “Pinocchio” on Disney+?