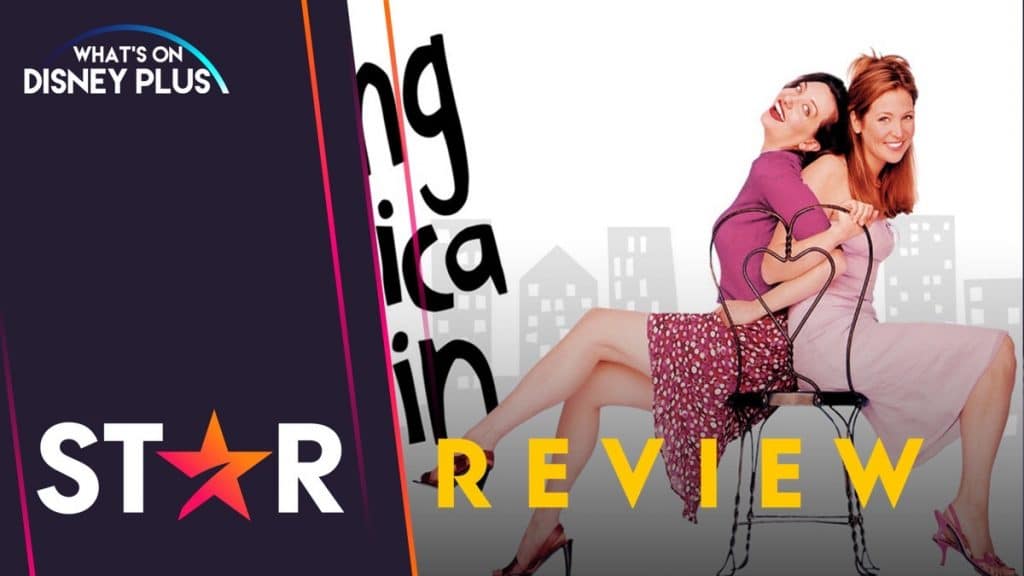 In this gently comedic tale of unexpected romance, copywriter Jessica (Jennifer Westfeldt) struggles on the blind dating scene, when her work colleague Josh (Scott Cohen) accuses her of not taking chances. Taking this to heart, she answers Helen’s (Heather Juergensen) advert in hopes of enjoying a lesbian experience. Initially aiming to be merely friends with benefits, their connection deepens to the point of causing emotional turmoil…

Kissing Jessica Stein originates from a slightly odd, almost naive time in society at the turn of the millennium (with an initial festival release in 2001) when entertainment started to act as if all major prejudices were conquered and subjects like exploring sexuality could be made into charming little comedies. And in fairness, this particular attempt does have a lot of heart and a genuine message to put forward but it’s hampered by writing that strives to be inclusive and welcoming but ends up stumbling backwards into an odd conclusion on the very way of existence that it’s trying to highlight.

After further consideration, the core issues come down to the characterisation of the titular Jessica. She’s rather neurotic and unsure, which leads to her never actually coming to terms with her sexuality. At no point does she verbally acknowledge that she is bisexual. The way it’s positioned in the plot, she is a straight woman who has “turned lesbian”. Of course, it’s not lost on me that much of this befuddlement is played up for comedy as someone who is out of her depth. And yes, some of the scenarios that this awkwardness brings about did elicit a chuckle or two. But that’s the problem. It leans too heavily on Jessica not truly being comfortable with same sex intercourse. To the point that it’s outright stated at one point that she can’t perform without “drinking a bottle of wine”. The suggestion that same-sex attraction is something that can be forced or chosen makes the whole premise rather misguided.

What makes all of this so much more disappointing is that Juergensen’s Helen works far better as more authentic representation of curiosity leading into legitimate bisexuality. She explores the idea after realising she’s finding casual encounters with men unfulfilling and is attracted to a passing woman in the art gallery she works at. She is then immediately comfortable with the concept.

I don’t want to be misunderstood here. It goes without saying that everybody reacts to a change in their outlook on life differently but when the two co-leads react so oppositely to their sparks of curiosity, it makes the growing relationship between them feel oddly uneven. Especially when Jessica either embraces a romantic relationship with Helen or scrambles desperately to hide it from her friends and family depending on whatever is most convenient for the plot. This would make sense if the film took the time to hint at homophobia within those around them, but as mentioned previously, this is that magical post-millennium period where prejudice was treated as over. Therefore, nobody is particularly phased when the secret is revealed and the emotional turmoil feels pointless.

When you take the time to think a little more deeply about this picture’s aim, it starts to become obvious why it feels fun yet unsatisfying. It tries to treat bisexuality as natural (as it should), yet has its eponymous lead treat lesbianism like a regrettable fad diet. The dramatic moments of the film want the viewer to feel sympathetic for these women who are falling headfirst into a supposedly unconventional love affair while nobody is resisting. What we have here is a story that wants to draw on the difficulties of a minority for emotional clout, without acknowledging what those difficulties are. The result of this glossing over is that it makes Jessica look like she’s fretting over nothing.

To cap all of this off, Cohen’s character Josh only exists in the story to serve as a “conventional” love interest. So despite all of the film’s sloppy pro-LGBTQ+ messaging, there still had to be an “out”. A way for the story to toy with offering something different, only to be able to revert back to “normal” if needed. It’s cheap and lacks courage. A film that wants to champion the right to love who you choose but is not quite ready to forego the possibility of a hetero romance instead.

Thankfully, I am more positive towards the soundtrack. It makes use of a significant amount of laidback jazz. It’s quite easily the kind of music that can be listened to outside the filmic environment and it perfectly suits the action on screen as it tries its best to be lighthearted and ever so slightly soppy.

Unfortunately, the music can’t pull everything into a cohesive whole. And that’s how I’d sum this film up. Its heart is in the right place. It has a few mildly amusing moments and both lead actresses are doing a solid job portraying the characters they’ve been given. But in the end, it’s the confused, non-committal narrative that drags it all down and makes this low-key comedy less than the sum of its parts.

Kissing Jessica Stein is available on Disney+ in a maximum resolution of 1080p HD and standard 5.1 surround sound on compatibility devices. This is in line with the Blu Ray releases worldwide.

Once again, Kissing Jessica Stein does not include an “Extras” tab on its page. Therefore, not even a standard trailer or “promo clip” is available.

“Kissing Jessica Stein” is available to stream on Disney+ now in many countries including the UK and Ireland, Canada, Australia and New Zealand and more.

What are your thoughts on “Kissing Jessica Stein”?

Jon has been a Disney fan all of his life. From wearing out those expensive VHS tapes and visiting Disneyland Paris as a child to becoming a huge fan of the MCU in adulthood, Disney has helped shape some of the happiest, most fun moments he can remember.
View all posts
Tags: kissing jessica stein, Reviews, star