Is Lizzie McGuire Returning To Disney Plus?

What's On Disney Plus > Blog > Brands > Disney > Is Lizzie McGuire Returning To Disney Plus? 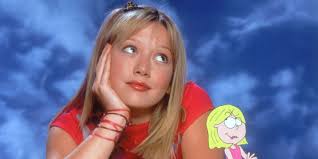 Is Lizzie McGuire Returning To Disney Plus?

It’s been over 15 years since the Lizzie McGuire movie was released and it looks like Disney is looking into bringing back the popular Disney Channel character. Entertainment Weekly recently spoke with actress Hillary Duff at Love Leo Rescue’s 1st Annual Cocktails for a Cause Fundraiser at Rolling Greens in Los Angeles, who said”

“There’s been some conversations, It’s definitely not a go. I don’t want to get everyone wild talking about it. I mean I love her so much. I think she was so important to girls at an important time in their life. If she could be important to them again at this age, I think that would be amazing.”

With so many years passing since the the movie, Lizzie McGuire would be much older, so “There’s been lots of conversations about that. I’m racking my brain, I don’t think she’s a mom yet, but she might be getting there soon.”

Hillary Duff did air on the side of caution, saying that nothing is set in stone just yet, saying “It’s fun. I feel excited. It could be a possibility or it could be nothing, so we’ll see.”

If Disney does bring back Lizzie McGuire, either as a series or as a one off movie, it would be perfect for Disney’s new streaming service, Disney+, since those children who watched the series in the early 2000’s would now be in their twenties, so the nostalgia pull would appeal to those adults to get them to subscribe. It would also help bring attention to the two seasons and movies that are likely to also be available on Disney+.

Disney have already brought back popular shows like That’s So Raven and Boy Meets Girl, so it wouldn’t be a huge shock to see Lizzie McGuire return.

Roger has been a Disney fan since he was a kid and this interest has grown over the years. He has visited Disney Parks around the globe and has a vast collection of Disney movies and collectibles. He is the owner of What's On Disney Plus & DisKingdom. Email: Roger@WhatsOnDisneyPlus.com Twitter: Twitter.com/RogPalmerUK Facebook: Facebook.com/rogpalmeruk
View all posts
Tags: disney, lizzie mcguire