The Walt Disney Animation Studios puts together two 45 minute cartoons into a feature length film in “Fun and Fancy Free.” The 1947 film is the ninth animated feature film from Disney and the fourth package film produced to save money due to World War II.

The first half of the film focuses on Bongo, a circus bear who flees the circus to live with other bears in the woods. There he falls in love and is confused by the bears’ way of showing affection. The second half is the story of Mickey and the Beanstalk. Mickey Mouse, Donald Duck and Goofy get the magic beans, plant them and then climb the magic beanstalk to the home of Willie the Giant. The two cartoons are connected by a bridge featuring Jiminy Cricket. It blended in some live action scenes featuring ventriloquist Edgar Bergen, as well as a little girl and two ventriloquist dummies.

This is one of the weirder movies in the Disney canon. I enjoyed the two cartoons, but didn’t particularly care for the live action scenes. Ventriloquist dummies are really weird. They aren’t entertaining to me, so it was always going to be hard to get behind those segments. But, I absolutely loved the two cartoons. Bongo is a very two dimensional character, but his journey is a lot of fun. The fish out of water story has been done many times before and since, but it’s a classic trope for a reason. It’s fun to watch him fall in love, sad to see him not understand why he’s being slapped and then laugh along when he realizes the slap is a way to show affection. Plus, the battle between Bongo and Lumpjaw is hysterical as Bongo uses his circus tricks to beat the much bigger bear. 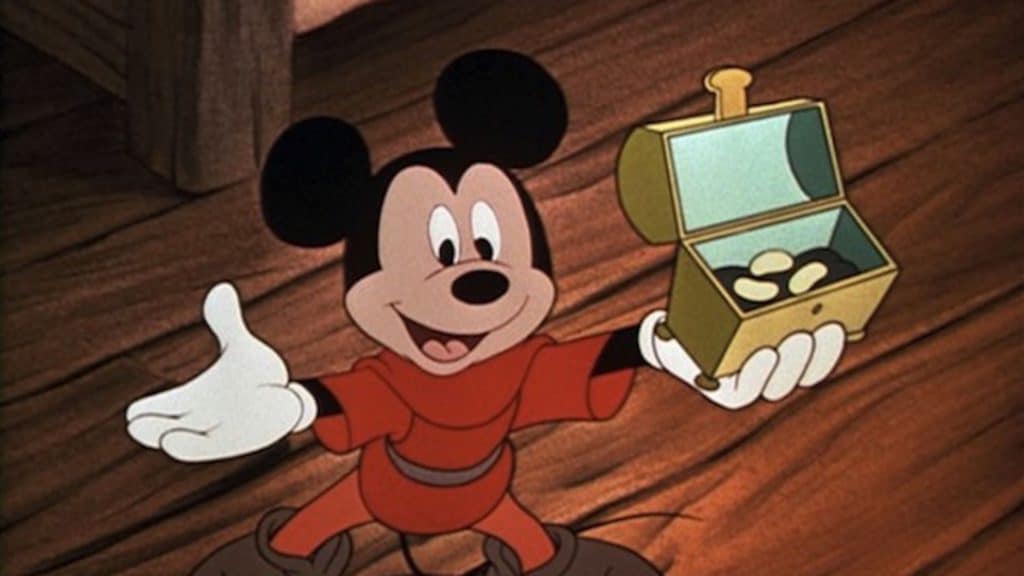 “Jack and the Beanstalk” is one of the most well known fairytales of all time, and of course, Disney had to give its take featuring Mickey Mouse. It seems weird to me that Mickey, Donald and Goofy haven’t appeared in feature length theatrical releases for the Walt Disney Animation Studios since the 1940s, with the exception of “Fantasia 2000” which re-used the same “Sorcerer’s Apprentice” short from the original “Fantasia.” Disneytoon Studios made “A Goofy Movie” and they’ve shown up in straight to video releases, but it’s been almost 80 years since they appeared in a film from the main studio. That fact blows my mind.

This is the third package film I’ve watched on Disney+. “Make Mine Music” isn’t available for some reason, so I haven’t watched it yet. But “Fun and Fancy Free” sits right in the middle of the three I have seen. It’s not as much fun as “The Three Caballeros” to me, but it’s also more fun than “Saludos Amigos.” That being said, I’m intrigued by this package film setup. I don’t want theatrical releases to feature it, but maybe Disney+ could make new 30 to 45 minute cartoons featuring the iconic characters and package them together for a Disney+ Original film? I would like to see that.

What did you think of “Fun and Fancy Free?”

Jeremy has been a big Disney fan since he was a kid growing up during the Disney Renaissance. One day he hopes to go to every Disney Park in the world.
View all posts
Tags: disney, Fun and Fancy Free, retro review, review, Wartime Era