Fearless: The Inside Story Of The AFLW | Hulu/Star Original | Episode 1 Review

What's On Disney Plus > Blog > Brands > HULU > Fearless: The Inside Story Of The AFLW | Hulu/Star Original | Episode 1 Review

Fearless: The Inside Story Of The AFLW | Hulu/Star Original | Episode 1 Review

Fourteen teams of women are making history in Australia as they play in the first ever women’s Australian Football League. “Fearless: The Inside Story of the AFLW” is the first series for Disney+ internationally, and Hulu in the United States, commissioned from Australia. It follows four teams from this league and tracks the struggles and triumphs of the women keeping the league going and how they are breaking ground in Australia.

In the first episode we meet several of the women who are making this league go. The one that most caught my attention is the former professional soccer player who is now an Australian Football League player. She grew up loving Australian Rules Football and wanted to play but was let known at a very early age that she would have to stop when it was no longer integrated because there was no league for girls. She accepted her path and played soccer as it was the next closest thing, but the drive and desire to play Australian League Football remained. She jumped at the chance and is now one of the pioneers of the AFLW. 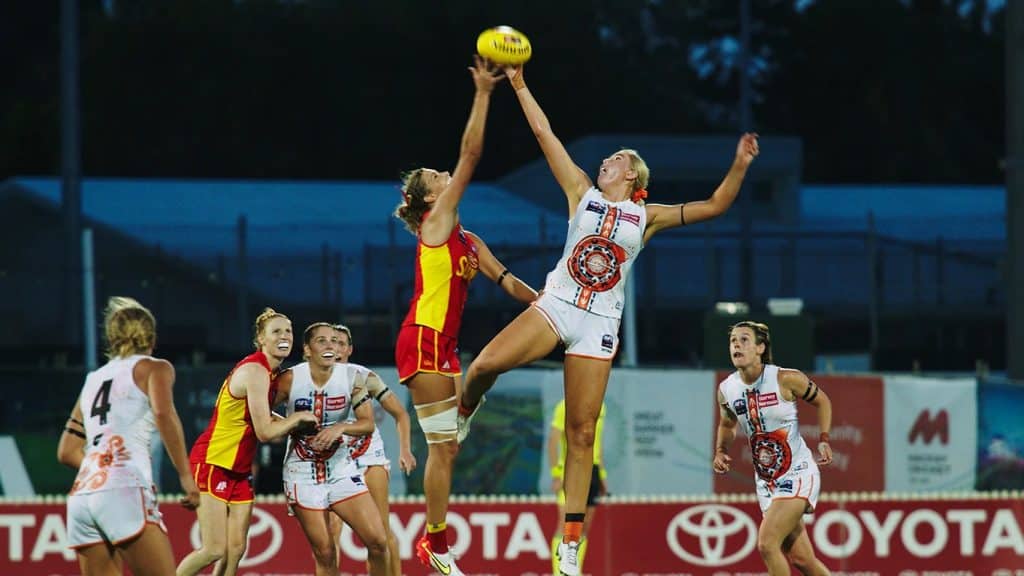 I’m not going to pretend that I know a lot about Australian Football. I can watch the parts of the games that are a part of this docuseries. I can probably find highlights on YouTube as I’ve managed to do with the Australian Supercar Racing Series that grabbed my attention. But, the fact remains, Australian League games aren’t shown much in the United States. I get mostly games from the United States as well as some leagues that are solely in Canada, Mexico or the United Kingdom. I’ve seen one Australian Baseball League game that was aired during the Major League Baseball offseason in the United States. This is going to be my biggest exposure to Australian Football Leagues and I’m excited to learn more as this docuseries follows these four teams all the way through the championship in April.

I love sports. I love American football. I love soccer, or football as it is called by most of the English speaking world. I have a feeling I’m going to be loving Australia League Football by the time this docuseries is done. I can’t wait to learn more about the players and their lives before they started playing in this league and what they do during the offseason. We got a glimpse of that in episode one and that is almost as much fun for me as the actual sports are. Plus, I love learning more about other countries, so I’m excited to learn a little more about Australia through this series.

What did you think of the first episode of “Fearless: The Inside Story of the AFLW?”