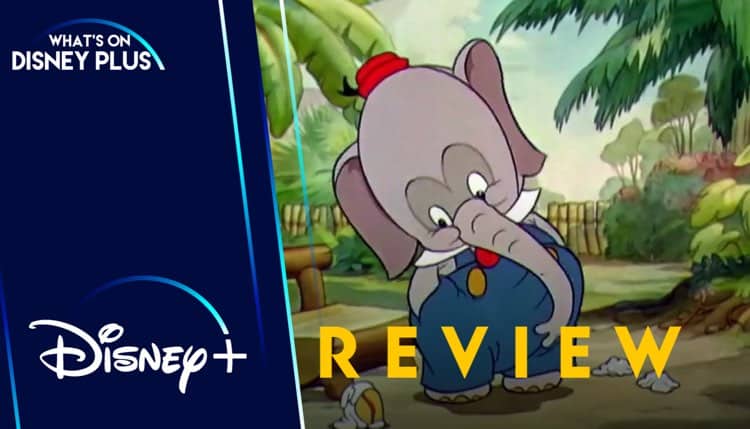 A young elephant is ashamed of his trunk after being mocked by the other animals where he lives, but learns to love it when he uses it to save his tiger girlfriend in “Elmer Elephant.” The young tiger is celebrating her birthday and Elmer is showing up with a present. But, when she goes up into her house, the other animals make fun of his trunk. He runs away until he meets a giraffe he points out a lot of other animals have unusual features and it’s not worth getting upset by people, or animals, who don’t understand them. But when the tiger’s home catches fire, Elmer is able to save her by using his trunk as a water hose and allowing her to grab it to reach safety making his trunk, and Elmer, the hero.

I love the message of this short. Too many times in life people become fixated on a perceived visible flaw. Instead of accepting the person how they are, these people decide to mock the person for this perceived flaw. It’s especially prevalent amongst children. How many times do we remember being made fun of, or God forbid making fun of someone else, for something that wasn’t in our control and wasn’t even embarrassing anyway? I was mocked for a birthmark on my neck in school. I’m sure many readers were mocked too. It doesn’t feel good. But, as an adult, I understand there’s nothing wrong with my birthmark. I wish it came in as handy as Elmer’s trunk does though, because Elmer saves the day and is rewarded with a kiss from his girlfriend. I also love the early animation. Yes, modern animation looks crisper and sleeker, but there’s something to be said for these animated shorts were it was clear they had to be hand-drawn. They may be a little rougher around the edges compared to the movies the Walt Disney Animation Studios makes today, but you can see the hard work that goes into them and really appreciate what the animators are trying to convey. I love going back and watching these older shorts and I’m glad Disney re-added the Disney Through The Decades collection so I can watch them all in order again.

Elmer Elephant is not a character I’m overly familiar with, but I’m excited to see if he appears in more shorts from this timeframe. I enjoyed seeing him, the giraffe, the pelicans and the tiger in this short. And, even though you’re not meant to like the monkeys and the hippopotamus,  I do enjoy how they are drawn and want to see more like this. I love the old style of animation and can’t wait to watch more.

What did you think of “Elmer Elephant?”

Jeremy has been a big Disney fan since he was a kid growing up during the Disney Renaissance. One day he hopes to go to every Disney Park in the world.
View all posts
Tags: disney, Elmer Elephant, retro review, review, Walt Disney Animation Studios