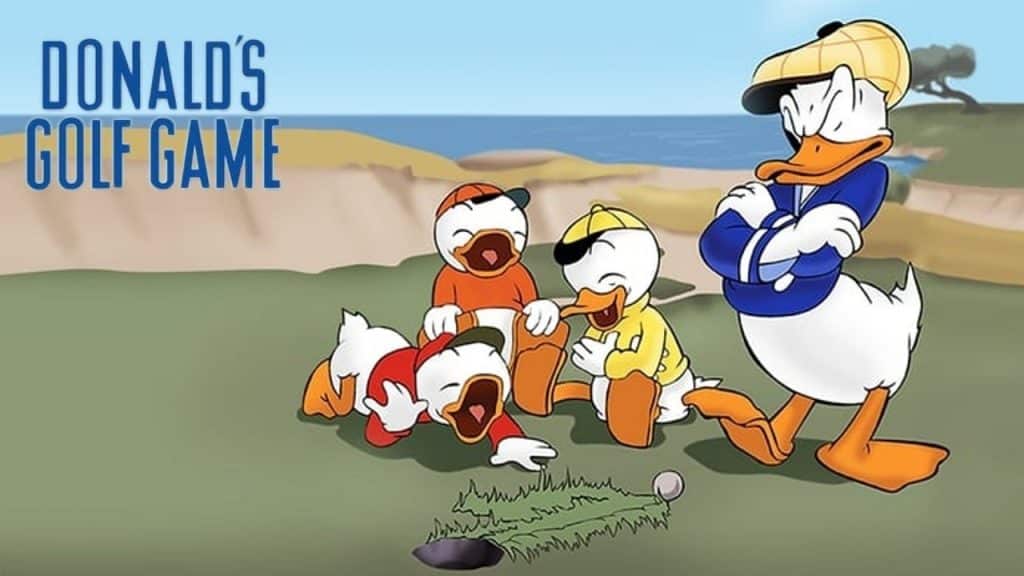 Donald has taken up golf, but keeps getting distracted by birds, his nephews and trick clubs and balls in the 1938 Walt Disney Animation Studios short, “Donald’s Golf Game.” The short starts with Donald spending some quality time with his nephews; Huey, Dewey and Louie. But, as birds and the boys keep making noise, he gets frustrated. Plus, Huey, Dewey and Louie are pranksters who give their uncle trick clubs that turn into nets and umbrellas and put a grasshopper in a ball as a prank, as well.

This is a tremendously funny short from the 1930s. I love seeing the early days of Donald. He was mean to Mickey and Goofy in a lot of early shorts, so it’s fun to see these where he is the star and he gets his comeuppance from his nephews. Donald Duck was always my favorite of the Sensational Six when I was a kid, because he always had the best reactions to the comedy around him. I hated him being mean and loved to see him get it back. This short is the perfect appeal to 7-year-old me.

My only complaint about this short is incredibly silly. By the time I had been introduced to Huey, Dewey and Louie, they had been established in their red, blue and green, respectively. In this short, they don’t wear those colors; wearing yellow, red and orange instead. It’s a nitpick as Disney didn’t know at the time how vital the characters and their identifying colors would become. It’s only a problem in hindsight.

This has been a fun journey through the early days of the Walt Disney Animation Studios. I’m loving seeing these early shorts, but I’m really starting to appreciate how well Mickey Mouse, Minnie Mouse, Donald Duck, Goofy and Pluto are portrayed in the early days of Disney. It’s clear how they became the Fantastic Five and then later the Sensational Six when Daisy was added to the roster. This is one of the best shorts I’ve seen and I can’t wait for more featuring Mickey, Donald and the rest of the crew.

Jeremy has been a big Disney fan since he was a kid growing up during the Disney Renaissance. One day he hopes to go to every Disney Park in the world.
View all posts
Tags: disney, Donald Duck, Donald's Golf Game, retro review, review, Walt Disney Animation Studios